The Vehicle of Ten Thousand Abilities

This is a lovely, seldom-seen postcard (actual size 5x8 inches), advertising the new Willys Universal Jeep. It doesn't carry the CJ-3B model number because it dates from that brief period in 1953-54 when the 3B was the only CJ in the Willys line. 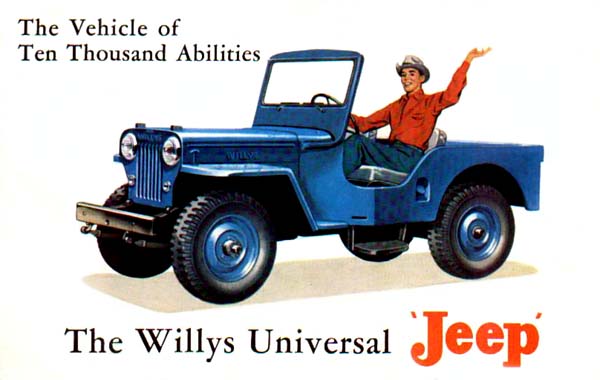 The illustration on this postcard also appeared in a Willys 1953 Saturday Evening Post advertisement for the whole new 1953 line. The fact that this jaunty artist's rendition was used only briefly in Willys advertising, is probably due to its inaccurate portrayal of the new high-hood CJ-3B -- it has a hood profile about halfway between where it should be, and where it was on the older, lower CJ-3A. It has been suggested that Willys wanted to make the 3B look more like the old 3A so as not to scare people off, but in fact the picture is probably just a slight revision of a CJ-3A illustration used in a 1952 Willys ad (40K JPEG). This retouching and re-use of illustrations was common practice at Willys.

The fact that the blue paint scheme wasn't actually available in 1953, may also have been a factor in the decision to shelve this illustration. It's too bad, because the bright colors and friendly wave make this one of the happiest images in Jeep advertising of the 1950s. (My daughter really likes it, but doesn't think it looks enough like me in my Jeep, so she did a new version, 25K JPEG.)

Even on this fun postcard, the text printed on the back (below) stresses the value of the Jeep not as a fun vehicle, but as a work vehicle, which soon became the main message of most CJ-3B ads and brochures.

If anybody knows the history of Pap's Motors in Berwyn, Illinois, we'd be interested to hear about it.

Thanks to Steve Chabot for scanning the postcard from his collection, and to Ron Ingram for the 1952 ad. -- Derek Redmond