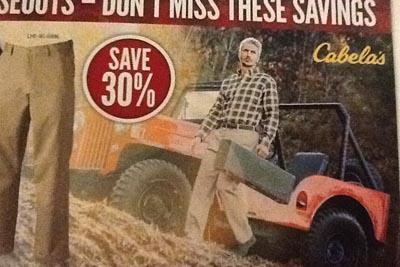 CJ-3B as the classic hunting Jeep. (But you won't find too many Jeeps up at the hunting camp wearing NDT's like these.) Steve Jaksha spotted this picture advertising men's wear, in a Christmas 2015 sale flyer from Cabela's, the "world's foremost outfitter." 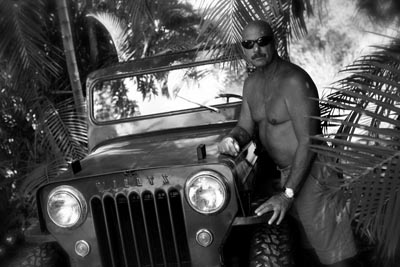 This 2007 photo advertising Bathys Hawaii watches shows that a tough guy in front of a high-hood Jeep is still as cool an image as ever. Ad agencies probably know that the CJ-3B showed up as #29 on Automobile magazine's list of the 100 Coolest Cars of all time.

See more on this ad, in A Man and His Jeep. 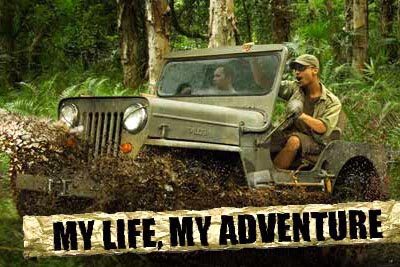 Roi Permadi originally spotted this ad for Djarum Super cigarettes on a billboard in Jakarta, Indonesia in 2008. 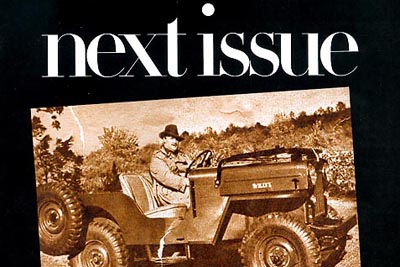 Freedom: A photo from CJ3B.info is artfully aged to look like a picture found in an attic, for the Spring 2003 issue of Freedom, the Chrysler and Jeep owners' magazine. The photo from Tom McCahill's 1954 Mechanix Illustrated review of the CJ-3B is used here to promote a feature planned for the next issue, in which celebrities and other Jeep owners will reminisce about their first Jeep. Editorial offices for the magazine are in the UK, which is likely why the text of the ad (110K JPEG) shows a certain lack of familiarity with North American geography. 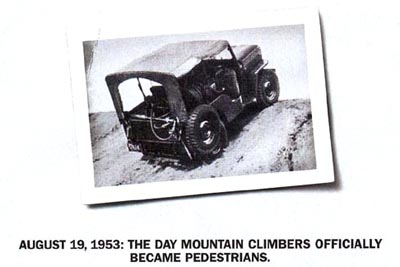 Jeep: The text in this 2002 Jeep ad begins: "August 19, 1953: The day mountain climbers officially became pedestrians." (See the full page ad, 100K JPEG, scanned by Bart McNeil from National Geographic.) The photo, provided to the ad agency by CJ3B.info, shows a CJ-3B with air compressor, and according to one of the writers of the ad series, the date August 19, 1953 was randomly chosen. 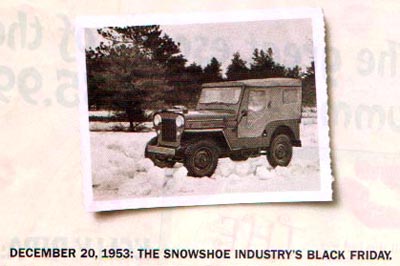 Jeep: The second ad in this 2002 series uses another photo provided by CJ3B.info from the 1962 CJ-3B brochure. (The Jeep was pushing a snowplow in the original photo, 40K JPEG.) The text also begins with another random date: "December 20, 1953: the snowshoe industry's Black Friday." See the full page ad (100K JPEG) scanned by Gary Keating from People magazine, for the complete text. By the way, 1953/12/20 was actually a Sunday. 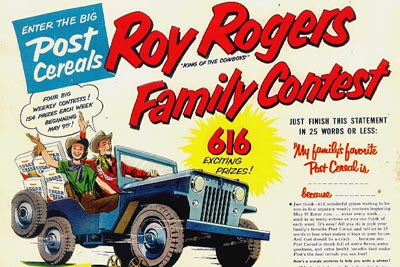 Post Cereals: Win one of 16 Willys Jeeps in the Roy Rogers Family Contest. From Look magazine, June 1, 1954. See the full-page ad for details. 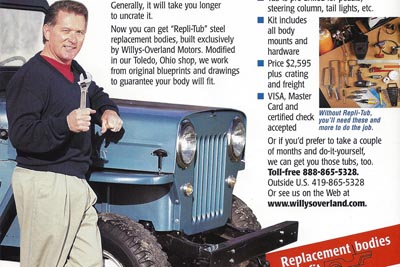 Repli-Tub: Willys-Overland, the parts dealer in Toledo, was one of the first major dealers to acknowledge the growing 3B market, with its ad in the April 200 issue of Jp for replacement bodies that fit (70K JPEG). No Willys logo on the grille. For details on the Jeep, see the Toledo Father's Day 2000 Car Show. 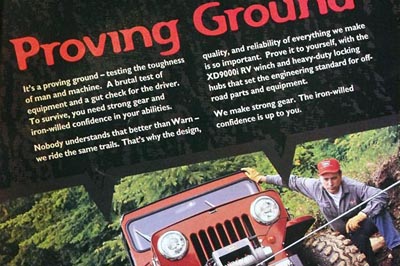 Warn XD9000i winch: If you didn't see it in the magazines, check out Warn's Proving Ground ad (330K JPEG). It looks like a CJ-3B, but it's actually a steel repro body from the Philippines, mounted on a 1959 CJ-5 frame with a Chevy 350, by Thomas Telford of Oregon (also in the photo). For details on the Jeep, see Radical 3B's on the Rocks. 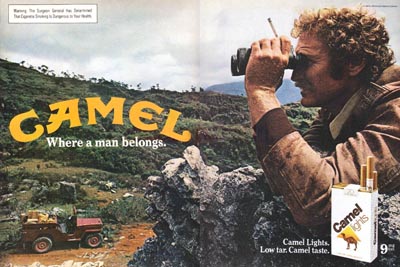 Camel Lights: Take a look at the dramatic panorama around this unusual Jeep in a 1980 magazine ad for Camel cigarettes. The male model with the binoculars gives the Marlboro man a run for his money, but the long-bodied CJ-3B (maybe an early Mahindra Willys) steals the show. See some more ads from this series in Where a Man Belongs.

Thanks to Dave Christians and Keith Minor for spotting ads. Drop me a line if you run across a CJ-3B in an ad. -- Derek Redmond