Reviews of the book and the DVD 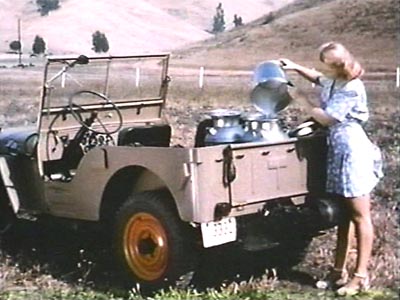 This is something like you've never seen before. Rare, historic film footage of very early Jeeps, beautifully transferred to DVD from the original film. Daron Wanberg and Fred Coldwell have found seven short films dating from 1943-45 which together show the development of the first civilian Jeeps, and assembled them on a DVD, together with some commentary and some video of Fred's restored CJ-2 Agrijeep.

It's hard to say what is the most interesting material here; it depends on what you're looking for. For me, the biggest treasure is the 3-minute 1945 promotional piece in full color, featuring a CJ-2 painted in a civilian color scheme. 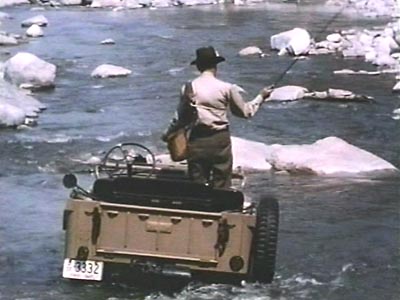 This unique color film shows the CJ-2 preproduction Jeep in use by everyone from a milkmaid to a rancher, prospector, fisherman, and a family going to church. It's clearly aimed at the agricultural sector; Willys-Overland's pitch to industry would come later.

Even in the CJ-3B era, color photographs (not to mention color movies) were rare, so it's a treat to see a 1945 Jeep in this remarkably well-preserved footage. Apparently we have more to look forward to, including the CJ-3B, as Daron and Fred are planning future DVD releases with film of Jeeps from the late 1940's through the 60's. (Note: see also 1950s Film Clips: The Rubicon Trail on CJ3B.info.) 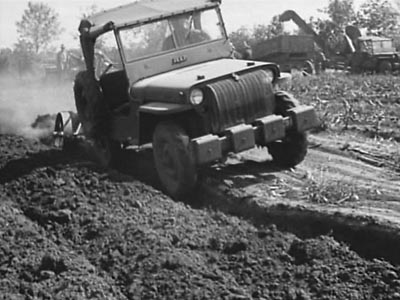 Many people will find the 9-minute reel of film showing the Agrijeeps being tested on a farm in Michigan in 1944, to be the most fascinating material. This silent footage is not a finished production, and was apparently intended only for showing to the W-O Board of Directors. I hope they enjoyed it as much as the crowd did at the Spring 2002 Midwest Willys Reunion, where this DVD was premiered.

The DVD is rounded out by several other Willys promotional films, and some commentary from Daron and Fred.

In the broadest strokes of historical writing, the Jeep story is well documented. Yes, there are many details that still elude those of us with more esoteric interests, but those of us in the writing biz regard that as opportunity. Still, it's both a wonderment and no surprise that so much of Jeep history appears to be lost. Given Jeep's role in history, readily apparent even as it occurred, it's surprising that more wasn't archived. At the same time, part of what makes the story so compelling is the almost endless stream of crises over which the various corporate entities endured and triumphed. When history was today, tomorrow was the watchword. No time for yesterday. Only recently has the corporate identity been stable and secure enough to start looking back a little.

The missing details of Jeep history have become the holy grail of researchers and the treasured gems of fans. From musty basements and dusty filing cabinets, the lost history of Jeep is slowly emerging. The detective work needed in finding this long-neglected material is reminiscent of Stanley's search for Dr. Livingston in the wilds of Africa. For two years, Henry Stanley tracked the good doctor across uncharted Africa, finding only tracks, rumor and conjecture. So it was for author Fred Coldwell when, after years of painstaking research, he put enough pieces in the puzzle of civilian Jeep development to write a book. "Agrijeep, I presume?"

The development of the civilian Jeep has been a decade-long research project for Coldwell. With much of early Jeep history in private hands and scattered around the world, it takes a genuine nice guy to open all those doors and a sharp researcher to find the important pieces of the puzzle hiding amongst detritus. It also takes a patient person to spend years writing and researching, going to print only when the last known fact is recovered and properly recorded. Despite continued pleading calls from interested parties to "hurry up," Fred merely smiled and kept plugging away at his own pace. The care taken with Preproduction Civilian Jeeps shows in the finished product.

The name Frederic L. Coldwell should not be strange to students of Jeep history. His 1996 Selling the All American Wonder was a delightfully detailed book that gave us an inside look into the marketing of the first civilian Jeeps. What was impressive about that tome was the quality and depth of research involved. In this latest book, Coldwell outdoes himself. 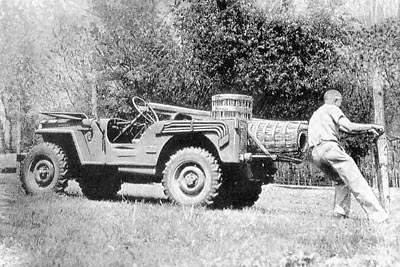 Preproduction Civilian Jeeps has the earmarks of scholarly work, such as footnotes, but it doesn't read like one. It's certainly detail-intense writing but it's also a personalized account of a man's growing interest in a topic and his expanding zeal in determining the real story behind the CJ-1 and CJ-2. Beyond the topical information, you will learn about the little clues that kept him on the hunt. Imagine looking at an undated and otherwise unremarkable photo on a brochure, seeing the shadow of something on the hood and having that event spark a major research project. Years later, that shadow was determined to be a nameplate that read "AGRIJEEP," and that photo was proven to be of the elusive CJ-1, long conjectured about, but whose existence had remained unproven until then. There it was, hiding in plain sight on a commonly available piece of Jeep literature.

The whole civilian Jeep story is laid bare. Gun barrels were still hot when Willys started work on the Civilian Jeep project (hence the term CJ), in January of 1944. The CJ-1 was a converted military MB built sometime in April of 1944 for tests. Apparently, only one was assembled and its ultimate fate is unknown. Concurrently, the CJ-2 models were designed and built in two distinct series of vehicles. These were the first true civvy Jeeps, designed and built from the ground up as such. Around 45 copies were made and, remarkably, a handful survive. It's these oddballs that started the whole CJ-1/CJ-2 furor going. Finding a military-looking jeep, with apparently original civvy accoutrements and some odd, brass "JEEP" nameplates, is bound to make a Jeep nut scratch his head. 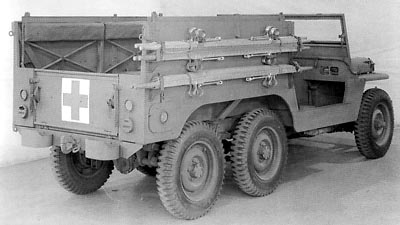 Preproduction Civilian Jeeps goes way beyond the preproduction models. You'll get a healthy dose of information on a good number of military prototypes designed for the war effort. These include the MT 6x6 "Super Jeeps," and the MLW "Jungle Jeep," both of which contributed experimental parts to the CJ project. There's also a sizable section on the Willys Quad and MA, as well as a great overview of the contractual battles that led to the GI jeep.

One of the most interesting parts of the book is the chapter on the experimental "X" numbered Jeeps. As early as 1941, W-O marked each experimental vehicle with an X number. This was used for record keeping and each Jeep, or jeep, wore their number on the front and rear bumpers. The practice continued into the 1950s. The highest known number was X-151, and it was worn by the pilot model CJ-4, and because of its connection to the development of the CJ-3B, here is your obligatory CJ-3B content on CJ3B.info! The "X-Chapter" details what is known about the various X-Jeeps, from the earliest known unit, X9 of 1941, to X-151 of 1950,and it's a fascinating look at W-O's experimentation with new ideas and upgrades.

There is so much more to this book that I'm just going to let you buy it yourself and be agog on your own. To use a tired, but accurate cliché, this book is a must-have for anyone interested in Jeep history. It's reference. It's tech. It's great pics. It's a 30 buck e-ticket ride into an almost unknown dimension of Jeep history. 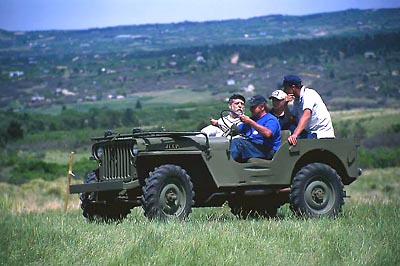 In this photo, Fred Coldwell provides chauffer services for a load of Jeep nuts in his own CJ2-09, at a military vehicle meet near his home in Colorado.

Thanks to Jim Allen for the review. -- Derek Redmond