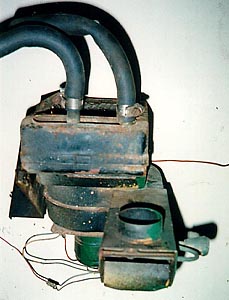 The heater seen in these photos was found by Alex Houle in his Canadian-made CJ-3B, built in Windsor, Ontario by Kaiser of Canada in 1964, serial number 10C 10172. Alex says every indication is that the heater was original equipment, and it appears to be designed to attach to the fresh air intake on the passenger-side cowl of a sixties 3B. It doesn't appear to have any identifying marks on it, as an aftermarket product might have.

Although this heater was not original equipment on CJ-3Bs built in the U.S., Josiah Bartlett and others have reported that similar heaters can be found on mid-60's CJ-5s or Willys station wagons.

The heater mounts in the normal position under the dash on the passenger side. The photo at left is from the driver's side, and shows the circular outlet for the defroster in the foreground, with the handle for directing air to the defroster or the driver. 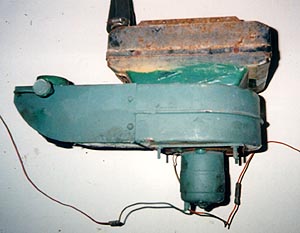 The photo at right is from the passenger's point of view, and shows the heater core on top and the fan motor at the bottom. 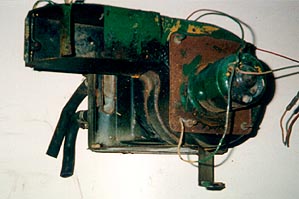 This photo is taken from below the heater, showing the hoses and mounting bracket projecting toward the firewall. 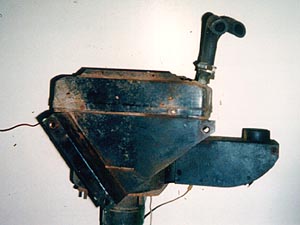 On the firewall side, there are three bolt holes for mounting to the firewall, and two smaller holes in the lip of the cover of the heater core, which attach to the fresh air intake duct.

The photo below shows the disassembled heater, revealing the heater core and the fan cage.

Note: similar heaters have turned up in two other Canadian CJ-3Bs, a '55 in Montreal and a '62 in Ontario.

Thanks to Alex Houle for the photos. -- Derek Redmond

See Dating a CJ-3B by Interior Details for information on the standard Harrison heater, and the optional fresh-air heater introduced on the CJ-3B in 1959.