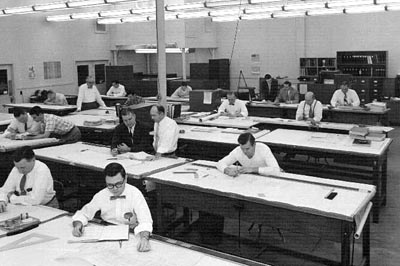 While looking at their calculations below, I kept visualizing engineers L.J. Hadden and D. Czolgosz working away with their slide rules in the Willys Research Building on the north side of the old Jeep plant in Toledo. D. Czolgosz was 26 years old at the time these calculations were done, and his son told CJ3B.info in 2002, "He had actually replaced L. J. Hadden who may have headed west to take a job in the aerospace (OK, airplane) industry."

This photo of the Willys Engineering Dept. may not show Hadden or Czolgosz, but it does include Ken Jordan, wearing a bow tie in the foreground. See the bottom of this page for some details on Ken's contributions as a Jeep engineer.

Here are some full-size scans of documents produced by the Engineering Department at Willys-Overland in 1951-52, and uncovered recently by Keith Buckley. They are interesting for at least two major reasons:

1. For those of us unfamiliar with the process of designing, testing and producing a new vehicle, they offer a glimpse of the amount of detailed behind-the-scenes work involved in the years of Jeep prototypes leading up to the CJ-3B.

2. They include some specifications at a level of detail not previously available for any of the CJ-4 prototypes, or even for the production-model CJ-3B. 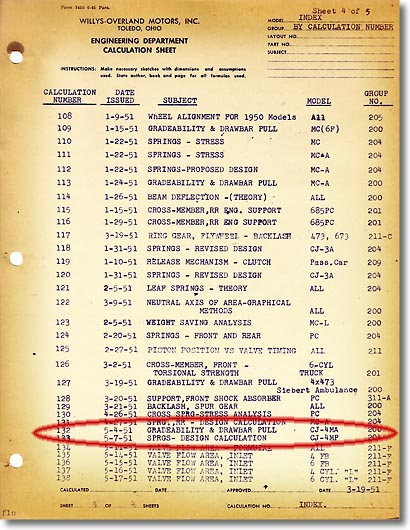 The sheet seen on the right is an Index of all the calculations issued by the department during the first half of 1951 (see a full-size copy, 200K JPEG). Some are theoretical figures or design proposals, and others are based on actual vehicles. The calculations represent a substantial amount of labor. They were of course all done on paper and a slide rule, without the aid of an electronic calculator or computer.

Highlighted on this sheet are two documents prepared by L.J. Hadden relating to versions of the CJ-4:

From a year later, there are two sheets of calculations by D. Czolgosz relating to the CJ-3B:

Even after the CJ-3B went into production, the engineers were kept busy. Two 1953 CJ-3B-based studies discovered by Todd Paisley, in his research on Willys Engineering Release Forms preserved for thirty years by Charlie Weaver:

In the foreground of the mid-1950s photo of Willys engineers at work (70K JPEG) is a young man wearing glasses and a bow tie, named Ken Jordan. Ken started at Willys about 1955 and worked his way up to a senior engineering position in Toledo, where he was responsible for much of the work of developing the landmark Wagoneer in 1963.

As author and historian Jim Allen has commented, "In these beginning years of the sport utilities, the Wagoneer represented an unprecedented refinement of four-wheel drive. Kaiser-Jeep staffers had spent almost five years developing the new vehicles, and they had a justifiable right to be proud when their work made its debut." (Illustrated Buyer's Guide: Jeep) 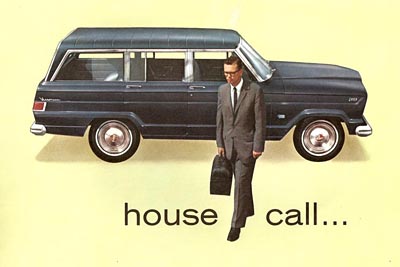 Ken's boss thought he would look good as the "country doctor" on this Wagoneer brochure: house call... (60K JPEG) ...or house party (100K JPEG), so he agreed to pose for the pictures. He eventually moved to the AM General military side of the business, where he is credited with creating the HMMWV (Hummer) concept. Ken Jordan passed away in 2000, but his wife and son recognized him in the above photo.

It's interesting to note that the Wagoneer offered independent front suspension as an option for a couple of years. Four decades later, Ken's son Robert Jordan was vehicle development synthesis manager for the very successful Jeep Liberty (2002), which brought IFS back to Jeep.

The engineering photo is from the Images in Time collection at the Toledo Lucas County Public Library, where it is dated as mid-1950s. See another photo (circa 1960) in Jeep Designers at Work on CJ3B.info.

Thanks to Keith Buckley, Todd Paisley and Robert Jordan. Thanks to Charlie Weaver and the Willys-Overland-Knight Registry Inc., guardians of the Engineering Releases. -- Derek Redmond

Return to Building Jeeps at The Parkway Plant.