A Day With a Farm Jeep 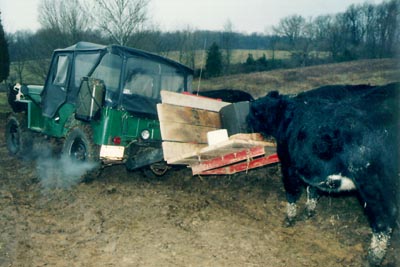 "Some of my pastures are inaccessible with my 2WD pickup, and since my tractors don't have cabs I use the Jeep a lot, especially in bad weather, lifting over 500 pounds of cattle supplement and protein blocks on a platform carrier mounted on the Jeep's 3-point hitch."

With that, Ron Ingram (60K JPEG) begins to describe the daily chores his 1961 CJ-3B undertakes. The Jeep was originally bought by the Louisville FenceCompany in Kentucky, with a factory optional post hole digger (nowlost). Let's join Ron for a day with a working piece of history. 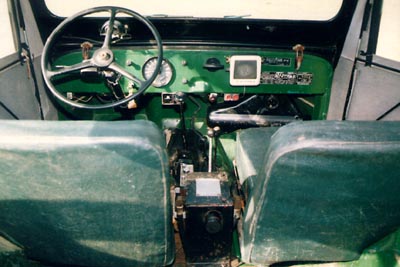 "I use the Jeep year round on the farm for many jobs such asspraying herbicides, seeding, grading snow, hauling hay and feed,stationary PTO work, and transporting machinery.

"The control levers for the 3-point hitch and the PTO are mounted on the floor between the seats."

See a close view of the dashboard tag from Hausman Motors (90K JPEG). 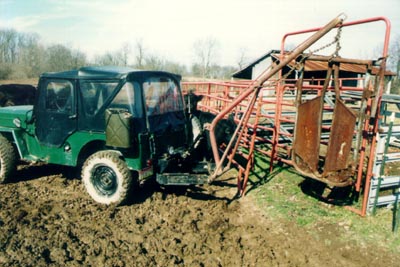 "By attaching a boom pole I can use the hydraulic lift to move heavyor bulky objects. Here I'm setting up a portable corral and using theJeep to lift the headgate into position.

"The wheels are original factory optional Kelsey-Hayes 15-inch rims. The auxiliary overload springs (20K JPEG) on each side of the rear axle were mounted at the Cleveland, Ohio factory where the 3-point hitch was installed. Coupled with the regular 10-leaf rear springs, they insure a highway ride akin to an empty dump truck." 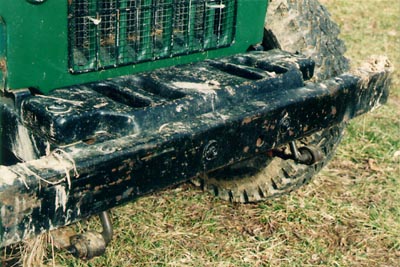 "This is the 265-pound counterweight mounted between the front frame rails. This was a factory option and I believe was standard equipment on Farm Jeeps. It served to counterbalance loads on the 3-point such as a seeder (90K JPEG), and also to increase the Jeep's pulling power when used for groundwork such as tillage operations." 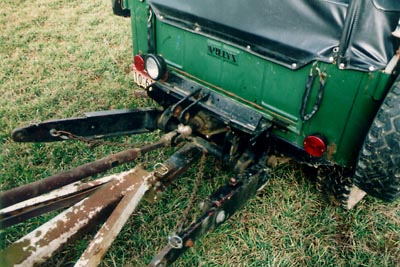 "This is a view of the hydraulic 3-point hitch arms, with the six-ton fertilizerspreader connected to the drawbar and the PTO unit (30K JPEG) -- with the safety guard removed. A hydraulic cylindermounted just behind the rear bumper frame controls the hitch. The right lift armhas a crank so that mounted equipment can be leveled side to side. One bigadvantage of this Stratton lift versus the earlier Monroe unit (80K GIF) is thatall of the lift and associated hardware is mounted so that the cargo area isfully usable and the tailgate can remain in place even when using the lift.

"In the field (and in low range) the Jeep has enough power to pull the spreaderas well as operate the distribution fans (via the PTO). However Iwouldn't attempt to pull this load on the road." 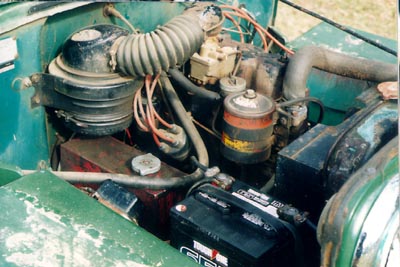 "The hydraulic reservoir is squeezed in just beneath the aircleaner, on the right side of the engine. The hydraulic pump (30K JPEG) ismounted on a bracket that attaches to the engine block with the capscrews that hold the oil pan in place. It is directly driven (not beltdriven) from the crankshaft pulley."

Thanks to Ron Ingram for the photos on this page. -- Derek Redmond