Fifty-three years ago, employees at the Willys factory in Toledo were celebrating 150 years of statehood for Ohio (see the licence plate above) as well as the 50th anniversary of Willys Motors. Most of them owned their own car and TV set by 1953, but if they went on a trip, chances are they travelled on the Baltimore & Ohio. Figures published at FiftiesWeb.com show that 46% of all domestic passenger travel in the U.S. in 1953 was by railroad, 29% by bus, and 22% by air.

At the newsstand in the Central Union Terminal, they would see a couple of brand new titles which would still be going strong 53 years later: Ian Fleming published the first James Bond novel Casino Royale, and Playboy magazine began publication, with nude photos of Marilyn Monroe in its first issue. 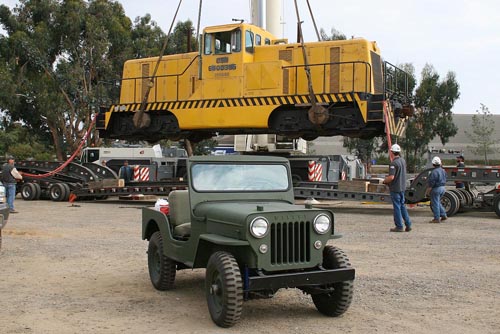 Both of the classic machines in this 2005 photo were built in 1953; a CJ-3B Universal Jeep and a General Electric 80-ton switcher locomotive. Many of the 80-ton switchers were used across the country by the U.S. military; this one was retired from the Navy at Camp Pendleton, California and was going to the Marine Corps Mechanized Museum there. Several local firms (Hawthorne CAT, Brewer Crane and Rigging, and Bill Signs Trucking) helped to get it moved via truck because the tracks were washed out in 1993 and never replaced.

The CJ-3B belongs to Mike Platzer; he found it in a farmer's field and has had it restored with a reproduction body. He's planning to repaint it as a Navy Jeep. Photo courtesy of Brian Platzer. 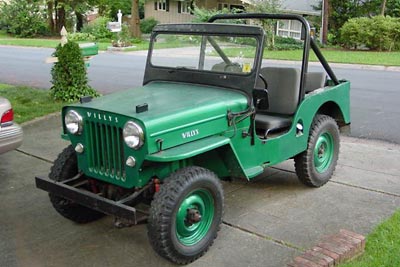 If you run across a CJ-3B in North America these days, the chances are good it's a '53. Of the surviving CJ-3Bs registered in the CJ-3B Serial Number and Engine Number List as of January 2006, 263 or nearly one quarter are 1953 models. This compares to 215 surviving 1954 models, even though there were actually more CJ-3Bs built during the '54 model year. The difference is probably due to higher exports in 1954; of the '53 Jeeps in the Database, only 16% are outside North America, but 27% of the reported surviving '54 models are overseas. And there are an average of only 40 Jeeps in the Database for each year 1955-65, after the CJ-5 had gone into production.

So the photo of this green '53 CJ-3B isn't unusual, except that it's a nice picture of a nice Jeep for sale in pretty much stock condition. It sold on eBay in 2004 for $6255, which is probably well above the average current selling price. Previous research suggests that condition is far more significant than model year, in establishing pricing. 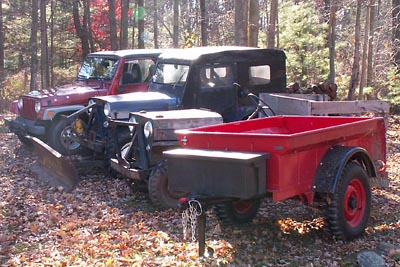 The two 1953 CJ-3Bs bought by Don Kostanski in Massachusetts in 2005 are more typical of the condition of Jeeps that have been on the road for 53 years. Both have been used as snowplows; one has enjoyed some protection from a Worman aluminum Jee-Cab. The other one has had much of the body replaced by a wooden stakebed.

Don took this photo of the two last fall with his TJ and Bantam trailer.. 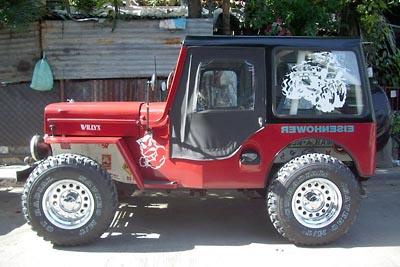 Then there are guys who are always improving on the original. You remember Chuck Yeager? He's the guy who wanted to go Mach 1 in a 3B. Well, back in 1953 the real Chuck Yeager reached Mach 2.43 (2,575 KPH) in a Bell X-1A rocket plane. (And Jacqueline Cochrane became the first woman to break the sound barrier.)

Probably by late 1953 somebody was already swapping a larger engine into a 3B. Here's a '53 that's been through a couple of engine swaps, and is currently running a Toyota motor. That's not uncommon in the Philippines where Ernesto Dacanay and his brother have been working on this Jeep off and on since 1978. Ernesto's in California now, and only gets to drive it when he's back home for a visit.

The body they have on it now is an older repro made by Gonzalez. And to his credit, Ernesto says he has his eyes open for an F-head -- he thinks it's time to go back to the original power plant. 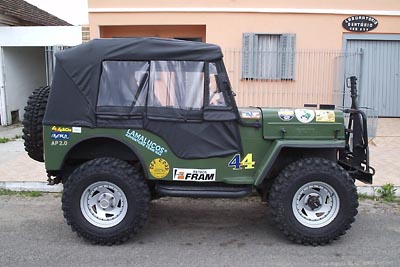 Guess what's under the hood of Felipe Borba's '53 in Brazil? A Volkswagen 2.0-liter engine, which likewise is not uncommon in South America. We don't have many other details on Felipe's modifications, but judging from the tow bar, he's more interested in off-road ability than highway speed. The nice Gaucho brand soft top is the same one Thovar Lemos has on his silver '54 3B.