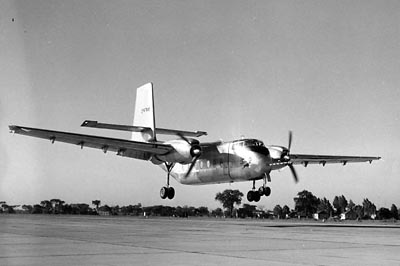 The DHC-4 Caribou is a twin-engine, short takeoff and landing (STOL) utility transport built by De Havilland Aircraft of Canada from 1958-1973. About half of the total 307 aircraft produced were sold to the U.S. Army, who used them extensively in Vietnam for tactical airlift missions in forward battle areas with short, unimproved airstrips. The Caribou could haul more than three tons of equipment and supplies.

The DHC-4 made its first flight on 30 June, 1958. This photo and the others on this page were taken that day or possibly at other early demonstrations of the new airplane. 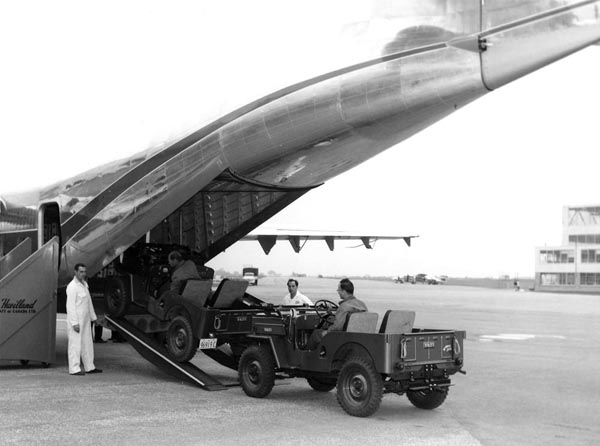 Two CJ-3B Universal Jeeps fit easily within the Caribou's 3-ton capacity, and for one reason or another, when the first 'Bou was flown for the press in Toronto, De Havilland decided to load it with two Jeeps. They may have been looking for a payload that suggested both the military and civilian capabilities of the aircraft.

Hard to say what color the Jeeps were, but the wheels appear to have been painted body color. They have an instrument cluster and Hall taillights, so are probably brand new 1957 or 58 models. The first Jeep has what we initially thought was an Ontario license plate, but a 19-year Army veteran told us is a Department of National Defence plate -- the Canadian army uses plates that can be custom made at the Battalion level. See a big enlargement of the two Jeeps (110K JPEG).

Jan Hogendoorn in the Netherlands came across the photo, which is dated September 1958 on the reverse side (60K JPEG). 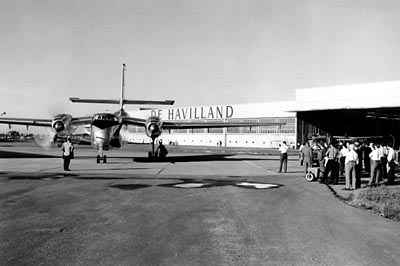 De Havilland Canada had been working since 1956 to develop an aircraft the size of a DC-3 with the STOL capabilities of their smaller DHC-2 Beaver. The high mounted wings kept the propeller blades clear of any debris, important when operating from primitive airstrips.

They appear to have had a good crowd on hand for this roll-out of the Caribou, and in the larger copy of this photo (70K JPEG) it looks like one of the Jeeps is just emerging from the hangar. 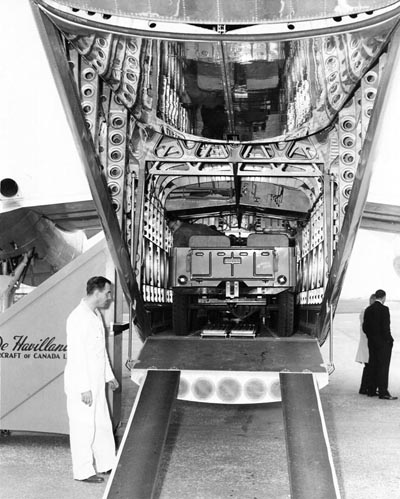 Jan Hogendoorn also found this photo of the Jeeps being positioned inside the cargo hold as the VIP's shmooze in the background. The upper cargo door is so new and shiny it looks like a mirror. See a big enlargement of the rear of the Jeep (130K JPEG).

The rear ramp could also be opened in flight for parachuting supplies or 26 fully-equipped paratroops. A remarkable photo by Wing Commander Prithipal Singh Bhachu of the Indian Air Force shows an emergency airdrop of supplies (100K JPEG) in the isolated Killar Valley in northern India, cut off by heavy snowfalls in 1980.

A late-1950s photo shows Canadian troops training (80K JPEG) with one of the early De Havilland demonstrators. The company sold Caribous to numerous commercial aviation companies as well as air forces around the world. It could even be equipped as a water bomber for fire fighting. As of 2007, the Caribou was the last piston-engined aircraft still in service with the Royal Australian Air Force. 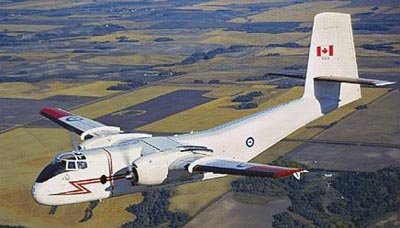 The Royal Canadian Air Force designated the Caribou as the CC-108 (left). It was briefly designated by the U.S. Army as the AC-1, which was changed to CV-2 in 1962 for the remainder of its Army career. In January 1967, when responsibility for all fixed-wing tactical transports was transferred to the U.S. Air Force, the Caribou received the designation C-7.


An interesting picture from John Stymerski's Caribou Photos shows a USAF C-7A (70K JPEG) with its Flight Mechanic popping through the roof hatch, in front of a Pacific Architects and Engineers civilian DHC-4 at the Vung Tau airbase in Vietnam.

A famous Caribou in Vietnam was known as Santa Bou. With a huge Santa/Rudolf painted on its nose, and a fully-stocked bar in its tail, Santa Bou made brief Christmas cheer visits to many American landing strips in Vietnam in the late 1960s.

It's nice to know that the CJ-3B has a connection to this legendary aircraft.

As of early 2007 there was a Caribou for sale online for $225,000. Could be the ultimate way to get your Jeep to the Spring Willys Reunion.

Thanks to Jan Hogendoorn for the historic photos of the Jeeps, to Wayne Buser's DHC4and5.org for the other photos, and to Bruce Teterin. -- Derek Redmond

Also on CJ3B.info, see a Royal Australian Air Force Jeep and some Airport Jeeps of the 1960s.