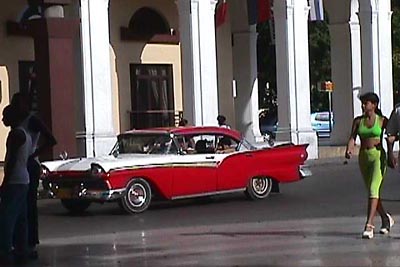 There are many of us who think of the late 1950s as the zenith of automobile style. In the half century since then, we've seen a gradual decline into safety and efficiency, with just an occasional dash of nostalgia.

As far as American cars go, Cuba is a country frozen in the 1950s, since exports to Cuba from the U.S. were ended by an embargo in 1959. So a late-fifties Ford alongside current fashions, is not an uncommon scene in Havana. 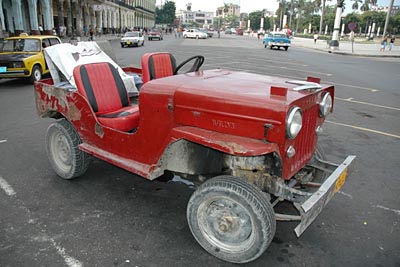 Despite a scarcity of replacement parts, old cars and Jeeps are maintained as everyday transportation, and handed down from generation to generation.

There were some CJ-3Bs imported into Cuba between 1953 and 1959, including this one still in service with a few bits removed and others added, including a nice hood ornament.

Photo by Tracey Eaton for his blog Along the Malecón. 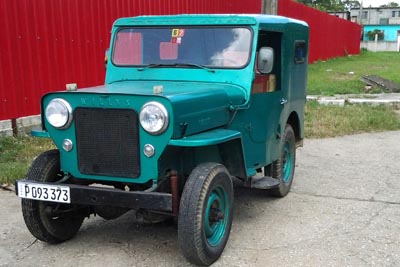 An unusual example is this 1954 3B which has been in the family of Alejandro Alfonso Hernández since it was new, and has been kept in nearly stock condition, with the original engine. See High Hood in Havana on CJ3B.info for more photos of this Jeep. 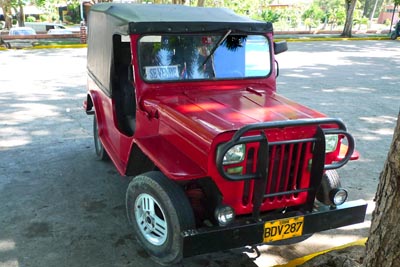 At the opposite end of the spectrum is this vehicle which has a CJ-3B front grille modified with rectangular headlights. Robert Bostelaar took the photo for his blog Caristas, and identified the chassis and drivetrain as coming from a Lada. 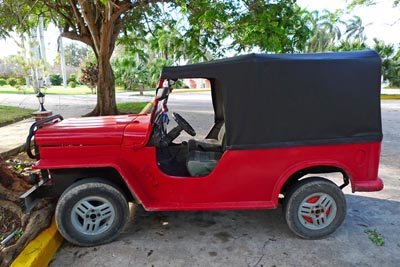 The side view and the interior (90K JPEG) reveal that the windshield is probably the only other actual Willys element remaining. 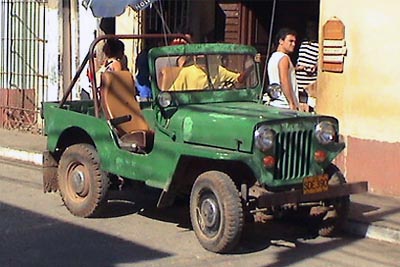 Here's another reasonably intact CJ-3B photographed by Paul G., but most pictures seem to indicate a Jeep population of primarily 3A's and station wagons. The affection with which Jeeps are viewed is indicated by a Cuban lottery ticket (50K JPEG) with a CJ-3A illustration, from the collection of Glenn Byron. 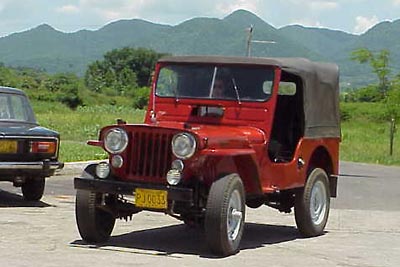 The timeless design of the Universal Jeep looks equally at home amid cars of the fifties or today, but who knows what's under the hood of this CJ-3A? Many of the older cars and Jeeps have had their engines replaced with Russian diesels.

This photo was taken by Ricky Rubin, who comments, "It's very funny to see an un-restored fifties Cadillac with a huge stick shifter coming out of the floor and this noisy, smoky diesel rattling around under the hood. The Cubans technically have absolutely nothing, but they sure can make the most out of it." 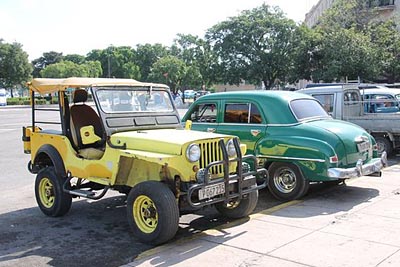 This 3A photographed by Hermes for Trip Advisor looks like it may still have its four-wheel drive intact. 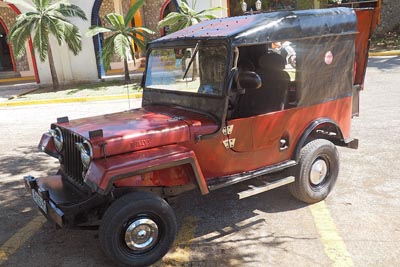 This one also looks fairly original except for the fenders. And the rumble seat (180K JPEG) added in the rear! Thanks to Robert Bostelaar for the photos taken near Santiago. 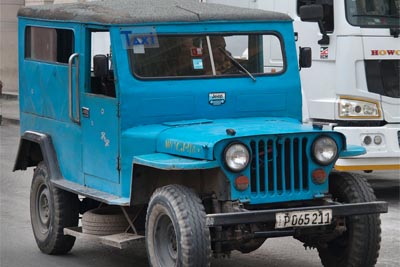 Despite the hood lettering reading "WO CJ-IIA", this taxi appears to have originally been a military M38. Thanks to David Busfield for this photo from Flickr. 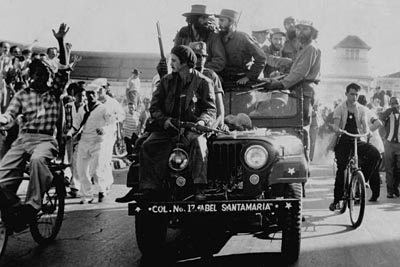 Willys apparently had a good relationship with Cuba prior to the revolution in 1959, and in fact Fidel Castro also looked favorably on the company. He is seen here riding into Havana after the success of his revolution against the Batista regime. The Jeep appears to be an export CJ-5, and carries the name of Abel Santamaria, an early hero of the revolution who was imprisoned and killed. 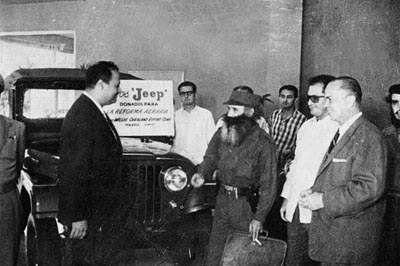 Castro probably appreciated the Jeep's value both as a military asset and an ideal vehicle for rural areas. One of his officers is seen here in 1959 with a CJ-5 "donated for agricultural reform" by Willys Overland Export Corp. 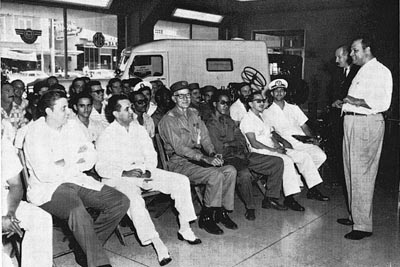 The occasion for these photos was a 1959 "training course" in Havana which brought salespeople from Toledo together with representatives from Cuba as well as other Latin American countries. Castro himself (120K JPEG) attended parts of the event.

In the background of this photo is a Willys ambulance (90K JPEG) also donated to Cuba. 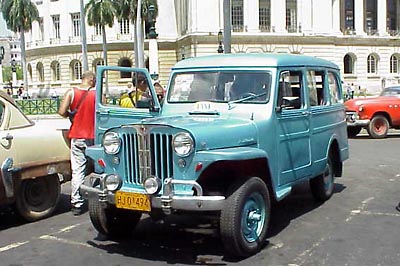 Ricky Rubin spotted this Willys Jeep Station Wagon with a late-40s Jeepster grille, now in service as a taxi in Havana.

Note however that when you see advertisements for "Jeep Tours" in Cuba, the vehicles are much more likely to be recent Suzukis or Daihatsus. 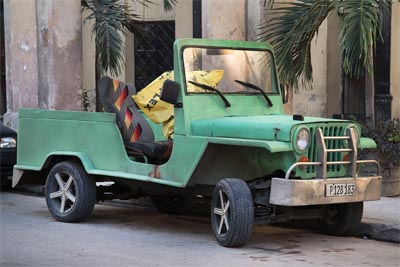 This 2016 photo from Havana again reveals an attachment to the look of a Willys Jeep, even when the chassis underneath is something completely different. Photo by David Busfield on Flickr.

The Jeeps, like other older cars, are often maintained and "improved" with locally-fabricated parts. Bill Blanton has commented, "When the embargo ends, the first American company to venture into Cuba should be J.C. Whitney, the mail-order supplier of parts for old U.S. vehicles." 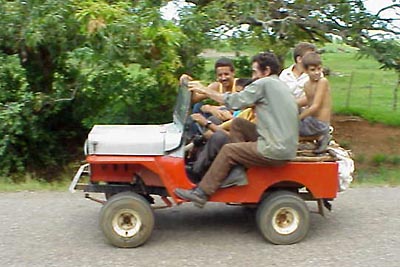 Here's something else that demonstrates some fabrication skills; a flatfender in 1/2-scale.

Ricky comments, "These guys use this jeep to get to work in the rich tobacco fields. The Cuban people are very crafty and it wouldn't surprise me if they built it themselves. The jeep had a pull-start engine under the hood. It kept up with us at 30 or so miles per hour."

See a front view photo (80K JPEG) of this mini-Jeep. (See also more Gas-Powered Toy Jeeps You Can Ride On on CJ3B.info.)

Thanks to Ricky Rubin, David Busfield, Robert Bostelaar and Richard A. Stanford for photos. -- Derek Redmond

Also on CJ3B.info, see Jeeps in the movie Havana (actually shot in the Dominican Republic.)

Return to the Index of Unusual CJ-3B Photos or see more Jeeps Around the World.