CJ-3B Photos Around the Globe 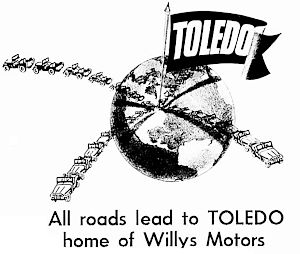 This illustration of Jeeps heading out around the globe comes from a 1957 newspaper ad (230K JPEG) in the Toledo Blade, promoting Willys Motors' contribution to the Toledo economy. The text mentioned that Jeeps were being sold in 134 countries, and listed the 18 Willys-licensed assembly plants around the world.

The text concludes: "When the first civilian 'Jeep' vehicle was produced, it was recognized that the so-called under-privileged people of the world needed tools like these to lift themselves to a larger and a better life. In this respect 'Jeep' vehicles are instruments for blazing the way to a path of peace among all peoples."


Here are some photos of CJ-3B Universal Jeeps doing interesting things around the globe. You can click most of the pictures to see big, beautiful copies. 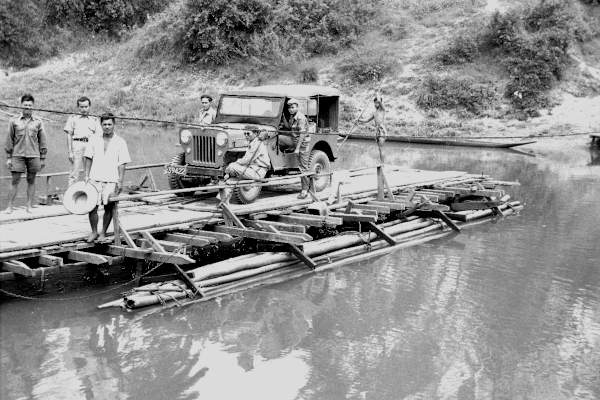 In October 1955, the World Health Organization sent Dr. Ramon Miquel to set up a pilot project in northern Thailand, for the demonstration of modern methods of control of leprosy. The disease was a serious problem in Thailand where an estimated 1% of the population (200,000 people) were infected. Jeeps provided by UNICEF helped the WHO's anti-leprosy team reach far into Thailand. Photo by Ramon Miquel courtesy WHO. 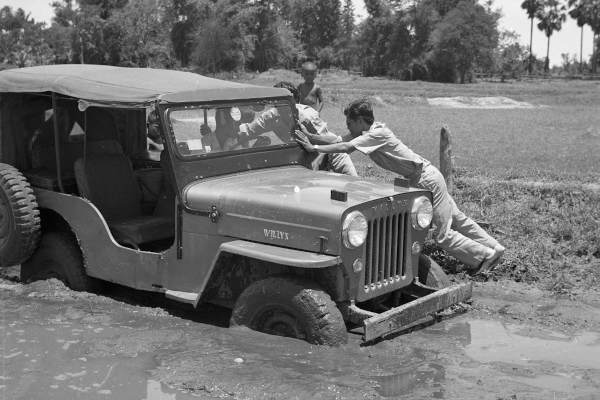 Flooding made it hard to tell the difference between the roads and rivers, and the CJ-3Bs loaded with medical gear sometimes needed assistance. Photo by Ramon Miquel courtesy WHO. 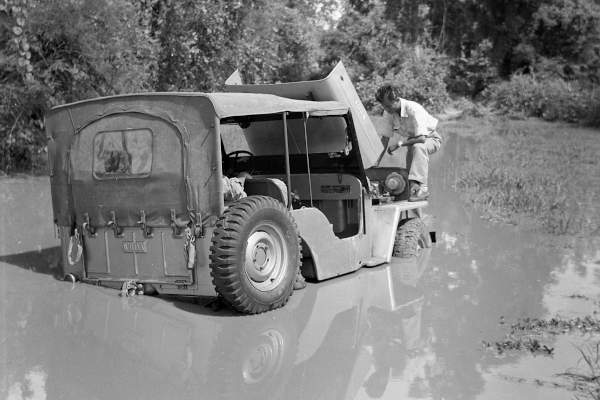 Looks like the water stalled the engine this time. The WHO's caption for this photo points out, "Wheel in foreground is the spare, mounted high on the side of the Jeep." Photo by Ramon Miquel courtesy WHO. 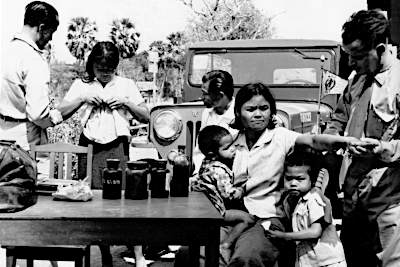 The method used by the WHO-aided team to track down cases of leprosy consisted of examining every child (270K JPEG) in every school in the region. Further examinations were made in the villages, among the family and neighbors of those children found to be suffering from leprosy.

The Jeep here is marked for UNICEF, and flies a WHO flag. Photo by Gordon Boshell courtesy WHO. 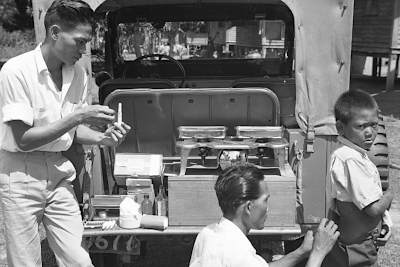 Children and grownups suffering from leprosy were given sulfone injections. The CJ-3B tailigate served as the clinic, with a stove for sterilizing instruments. Photo by Ramon Miquel courtesy WHO. 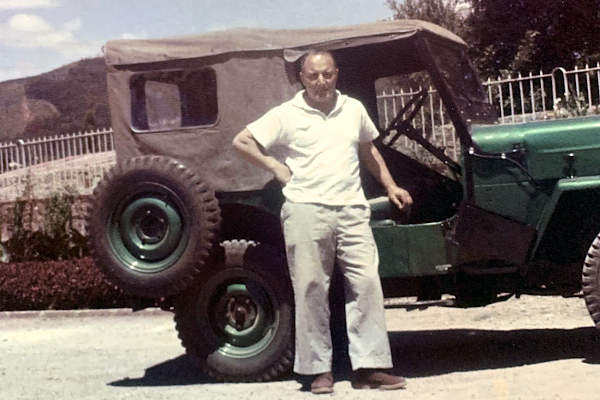 Steve Uanna wrote in late 2020 to say, "My father William 'Bud' Uanna was the First Secretary and Administrative Officer at the American Embassy in Ethiopia in 1961. I'm enclosing a picture of my father with our Jeep. This was a 1959 CJ-3B and had a 140 kilometer per hour speedometer. Even at 5000 foot altitude we had the Jeep up to almost 130 kilometers when the needle started to bounce back and forth. The Jeep had two jerry can holders." 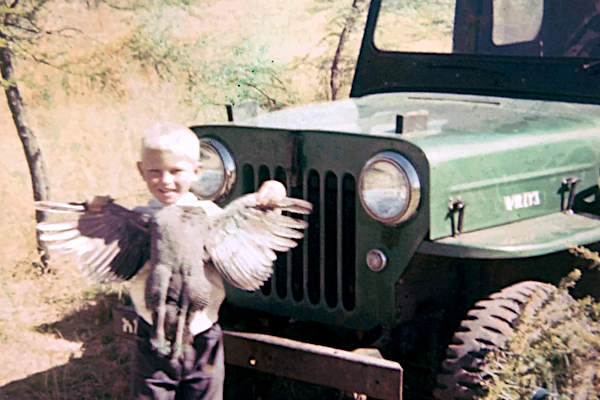 Steve said, "This is me in the Ethiopian outback in 1961 hunting Guinea Hen. I am 6 years old here. People only took Jeeps or Land Rovers or VW Beetles camping. But if you didn't know the terrain and wanted to make it back, 'take the Jeep.' My mother also drove the Jeep around Addis Ababa." 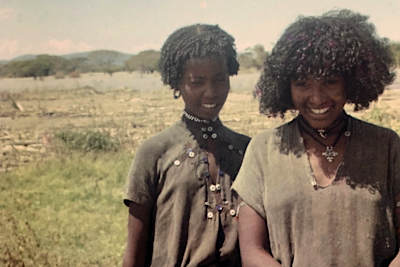 "Here's a picture of two women we met in our travels in the outback who were kind enough to let us photograph them." 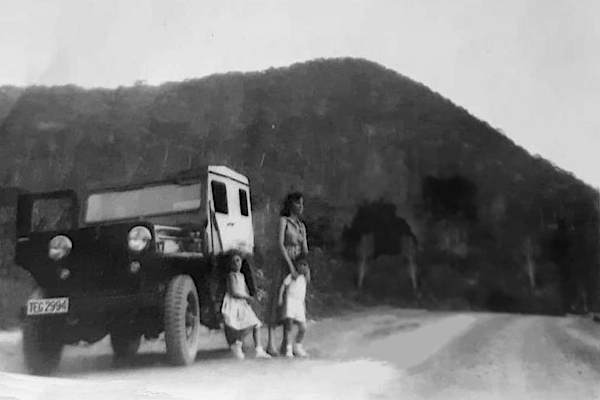 Carlos Hernández was born in 1961 in Spanish Guinea, now Equatorial Guinea, on the west coast of Africa. He says this is "a very special photo to me, of my mother, my brother and my sister, when we lived in Africa. The photo was taken by my father. But I had not been born yet. The date is 1957." 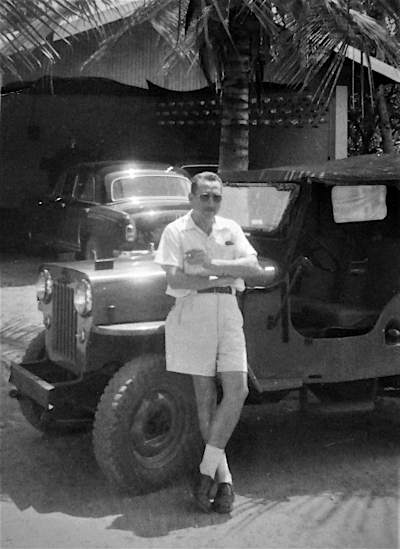 Carlos adds, "My father Francisco Hernandez was the manager of coffee and cocoa farms, and the Jeeps seen here were owned by the farms. His nickname was Pachi Calibres, because of his fondness for rifles and small arms."

This photo was taken in Bata, a major port and formerly the capital of the country. When Carlos was ten, his family had to move back to Madrid, when Equatorial Guinea won its independence from Spain. Both Carlos' father and his mother Pilar Arranz are now deceased.

In 1956, J. Mortimer Sheppard "sailed" some 3,000 kilometers across the Sahara Desert from Morocco to Senegal, with his wife, three children and a three-wheeled "land yacht," towed when necessary by a CJ-3B. A Volkswagen assisted with carrying the family and gear, but also ended up being towed frequently. 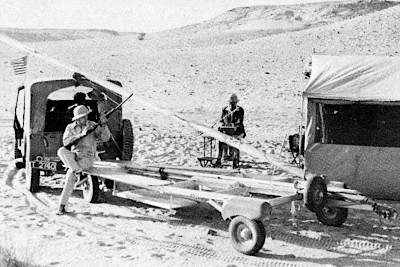 The 16-foot yacht had a 28-foot mast. Much of the cargo space in the Jeep was kept filled with 50 gallons of gasoline, 10 gallons of water, and cases of canned food. 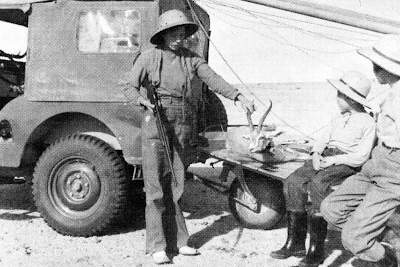 Mr. and Mrs. Sheppard also hunted some of the family's food, in areas where they found wildlife.

J. Mortimer Sheppard wrote several articles and books about the trip "by sail" across the Sahara. See an article from Willys' Globetrotter magazine, at eWillys.com. 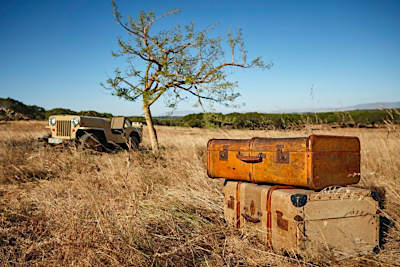 The "safari" concept is still a romantic image, and was used by Euro Connection Film, Music and Photography of Cape Town, South Africa, for a fashion photography shoot for Harrods magazine, April 2018 (260K JPEG). 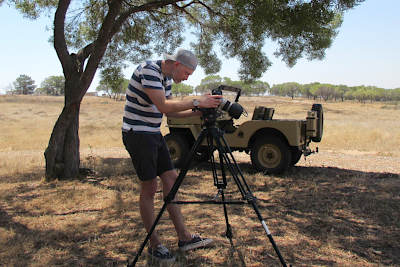 One of the props on the shoot up in the hills was a pretty nice Willys CJ-3B. But shots involving wildlife were done on an indoor set (400K JPEG). 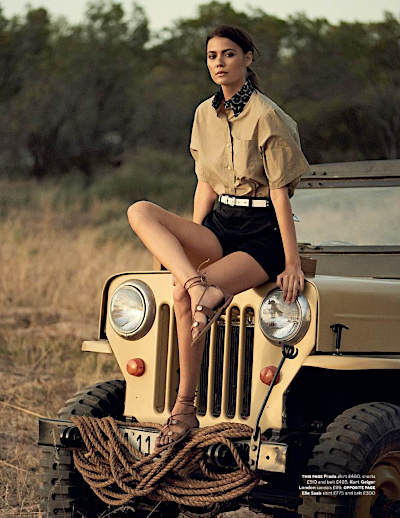 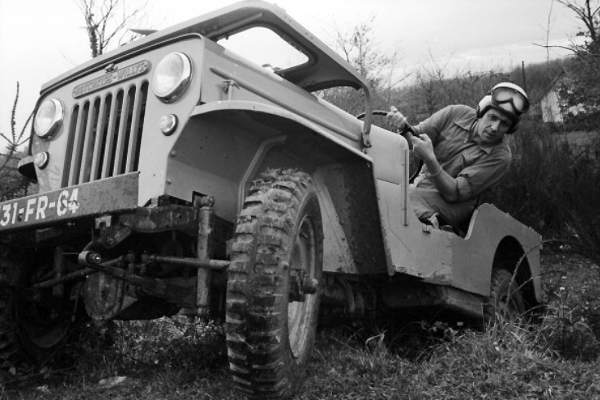 Jose Bidegain poses in a Hotchkiss JH-101 in these photos taken by Jean Tesseyre for Paris Match on 4 January 1963. Reportedly he drove this Jeep in the famous Rallye des Cimes in southern France, although I'm pretty sure he would have at least installed a roll bar for the occasion. 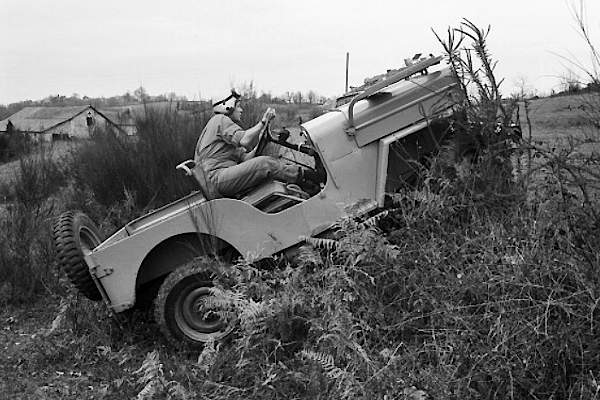 Bidegain was a prominent and progressive entrepreneur and industrialist, who also worked for the French government. Born in Argentina, he grew up in the Basque area in the south of France, and he loved automobiles, so it was natural he would get involved in the Rallye des Cimes in the Pyrenees Mountains. 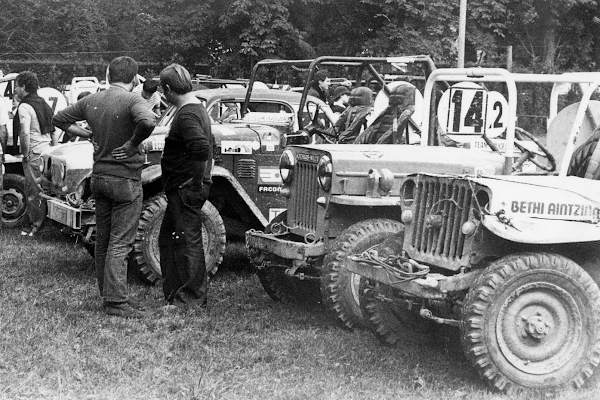 First run in 1951, and almost annually since then, Rallye des Cimes has become a place for many vehicle manufacturers to test their 4x4 technology, but its early years were closely connected with flatfender Jeeps.

These two vintage photos of the rally are courtesy Automobile Club Basco-Béarnais. 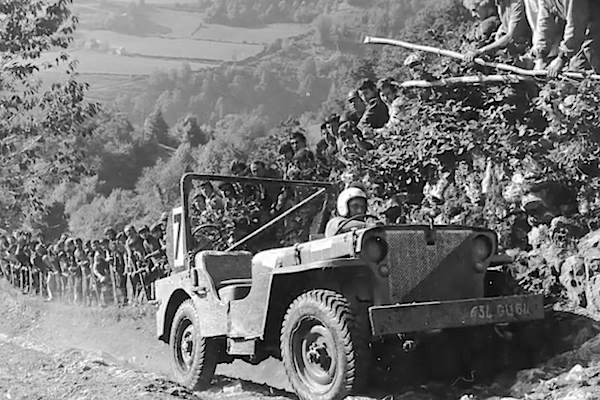 The rally's website Ecurie des Cimes comments that the rally was born when the U.S. Army jeep was "seen as the utility vehicle that would make life easier. Closely linked to the liberation of France, the jeep continued its work and brought people closer together, avoided long hours of walking, allowed the doctor or the veterinarian to practice faster care on people or animals. Symbol of exchange, of progress, the Jeep was the indispensable vehicle of rural life. Many tracks or roads open today originated where the Jeep first put its wheels." 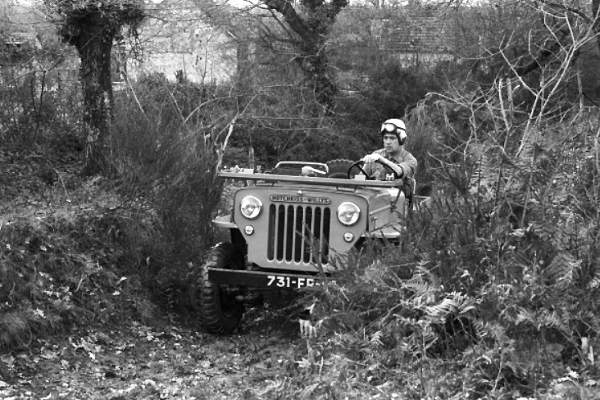 Jose Bidegain was the founder of several groups in France promoting innovation and leadership in business, and also director of the humanitarian organization Action Against Hunger. He was known for his generosity, and when he died in 1999 at the age of 74, his obituary was titled The Death of Porthos (referring to Porthos of The Three Musketeers.)

See more on Hotchkiss-Willys in Jeeps in France on CJ3B.info. 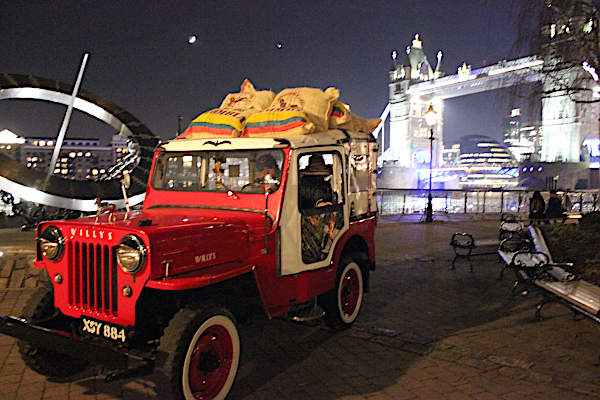 Carlos Torres drives his Willys mobile coffee shop beside the Thames River in London, with the famous Tower Bridge in the background. Carlos' business is called CJ3 Beans, and his CJ-3B is actually a former Swiss Army Jeep. 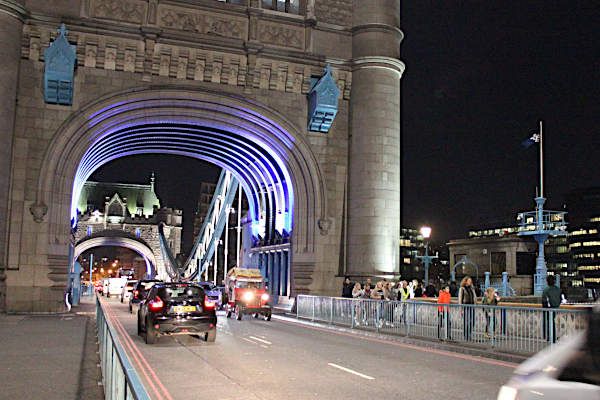 A few minutes later, his Jeep is coming across the bridge, built between 1886 and 1892 and now spruced up with LED lighting. But the year 2020 has been a tough one for CJ3 Beans, as with many food service businesses. 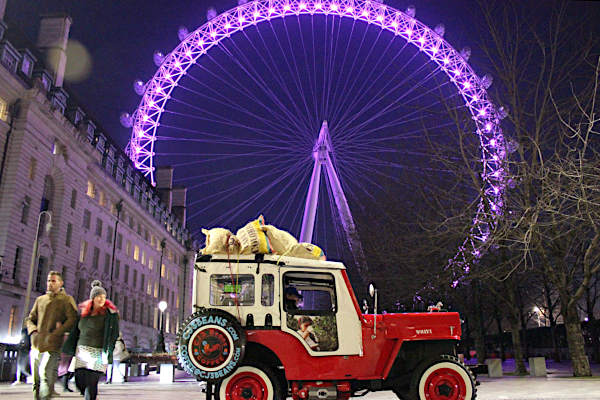 Carlos stops near The Queen's Walk, with the London Eye in the background -- a good spot for a photo, and maybe a good spot for foot traffic business, but during Covid 19 restrictions he has only been able to use the Jeep for private events and deliveries. 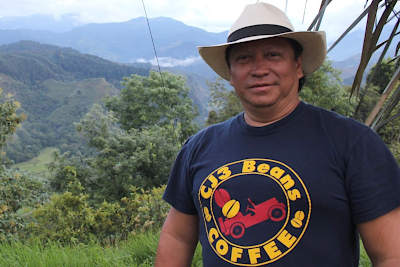 Here's Carlos, back in Colombia where the beans come from. See more about CJ3 Beans in Colombian Food Carts Hit the World on CJ3B.info. 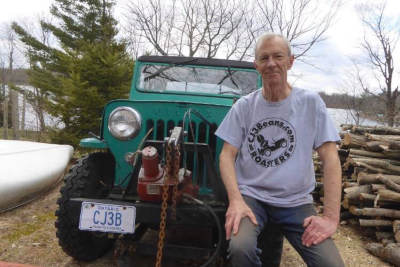 Here's me in Canada, wishing I could order CJ3 Beans coffee. So far it's only available in the UK.

For the photos on this page, thanks to the World Health Organization, Euro Connection, Steve Uanna, Dave Eilers, Federico Cavedo, Carlos Torres and all the photographers. -- Derek Redmond

Return to the index of Unusual CJ-3B Photos, or see more Jeeps Around the World on CJ3B.info.