Federico Cavedo's latest find from the LIFE Photo Archive is this set of unpublished photos by Ralph Crane, taken in the San Gabriel Mountains northeast of Los Angeles in 1957, as searchers and relatives waited for the rescue of a group of Boy Scouts stranded by a sudden blizzard. 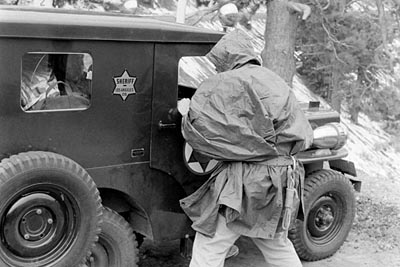 Some of the pictures which didn't make it into the LIFE magazine article, are interesting for me because they show two CJ-3B Jeeps belonging to the Los Angeles County Sheriff's Department. Unlike LASD patrol cars of the day, which had white doors and roof, the Jeeps are painted solid black. They carry red lights and sirens, and the Sheriff's gold star on their doors. This one has smaller stars on the sides and rear of the Koenig Jiffy Cab. 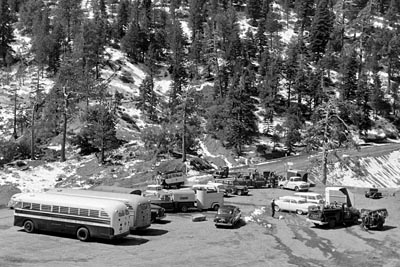 A wide view of the scene shows one of the Jeeps in the background, blocking the road. A variety of other interesting vehicles includes a Jeep Station Wagon, and several horse trailers. The horses probably belonged to members of the San Dimas Mountain Rescue Team, a group of volunteers which had been formed in 1955 to provide rescue services in these San Gabriel Mountains. In 1957 SDMR became a unit of the Sheriff's Department, and as of 2011 still operates out of the San Dimas Station. The title for this web page was inspired by their motto: "Anytime. Anywhere. So others may live." 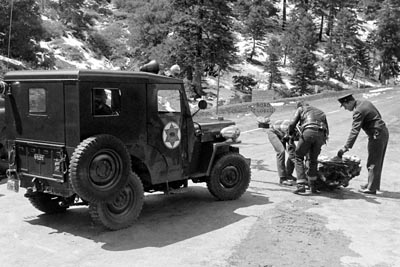 Ironically, the peak on which the Boy Scouts were stranded was Mt. Baden-Powell, named for the founder of the Scouting movement. Here Sheriff's Deputies have closed the Angeles Crest Highway (California State Route 2), which winds through the Angeles National Forest (see Google Maps.) They appear to be using the Jeep to pull a large piece of a log, perhaps to help block the road or simply clear parking space.

This shot (our February 2011 cover photo) is the best view of the second Jeep, which doesn't have the small stars on the hardtop. This Jeep is equipped with radio and loudspeaker, new technology on a patrol vehicle in 1957. 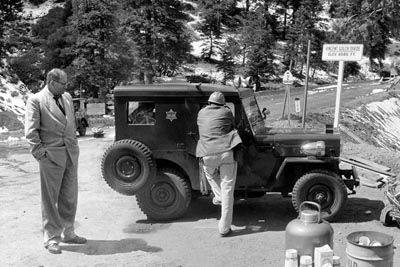 Photographer Ralph Crane (50K JPEG) was born in Germany, but fled the Nazi regime prior to World War II. He sold a photo to LIFE for its first issue in 1936, and came to the U.S. in 1941 where he continued to work for LIFE through the Black Star agency. He became a LIFE staff photographer in 1951, and worked there until the last regular issue in 1972, according to his daughter Rita Crane.

In covering this story in 1957, Crane took a lot of vertical format pictures, maybe hoping for a cover photo (he shot many LIFE covers over his career.) Here CJ3B.info has created a composite image using two of those vertical photos, in order to get both of the Sheriff's Dept. Jeeps into one picture. 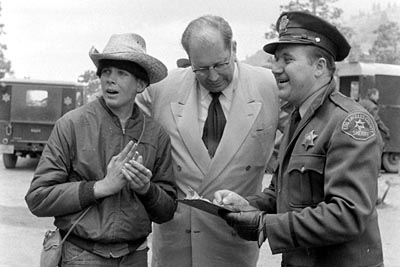 The rear of a Jeep, with Sheriff's stars on the hardtop, is seen in the background as one of the rescued Scouts is checked off the list by a Deputy. The gentleman in the suit, who also appears to be driving the Jeep in our cover photo above, is not the long-serving Sheriff Eugene W. Biscailuz but may be another high-ranking member of the Department.

The LIFE magazine article titled "Scouts' Survival Test" (200K JPEG) published in the issue of 29 April 1957, includes photos by Richard Hartt and one taken in the mountains by a Scoutmaster. There are horses, but no Jeeps. 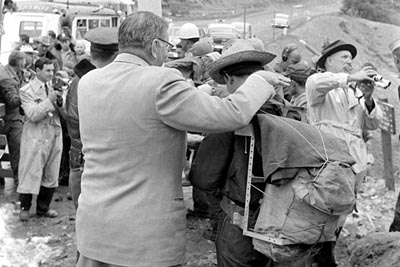 The text (60K JPEG) of the article describes how 147 boys set out on a five-day, 60-mile trek through the mountains. On the fourth day a blizzard obscured the trail, leaving 42 of them stranded at 8,600 ft. of elevation, while 105 made it to shelter further down. Rescuers located the missing 42 and brought everybody down after two further days, with no serious injuries, while relatives waited below.

This Ralph Crane photo shows that the event had attracted plenty of other press attention by the end of the two days. Lots of coverage of a successful job by the LASD, SDMR and CJ3B.

Thanks to Federico Cavedo for finding the photos and the published article from LIFE. -- Derek Redmond

See more CJ-3Bs in the LIFE Photo Archive, or search the LIFE archive.

The L.A. Sheriff's Department still has Jeeps in service as of 2011; see Police Service Jeeps on CJ3B.info.