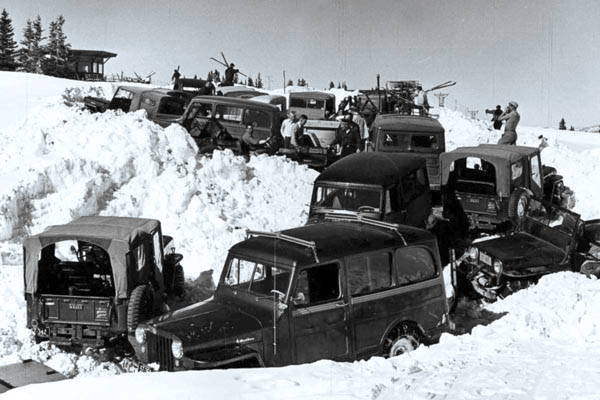 There are at least three CJ-3Bs (two with their tops down) in this group of about 17 Jeeps assembled at a ski hill, and we now have the answer to the question of where and when this photo was taken, thanks to Jan Hogendoorn.

In 1954, Ski Lift #1 in Aspen, Colorado was out of order for a week, and "Operation Jeep Lift" began. Midnight Mine Road and Little Annie Road were plowed, and townspeople drove skiers up Aspen Mountain in their Jeeps until repairs on the lift were complete.. In an era when almost everyone in town drove a Jeep, thirty-five Jeeps hauled 2,500 skiers and received $1,109 in tips.

In the photo, skiers are unloading their equipment after the long ride up from Castle Creek, while locals chat before heading back down. Sitting in the center CJ-3B is Dave Stapleton, and standing next to him is John Thorpe (white shirt), Neil Beck (grey shirt) and Euclid Worden (black cap.) The original octagon sundeck is on the left. The photo and information are courtesy of the Aspen Historical Society and Aspen Journalism.

Swedish Army Tries This Out 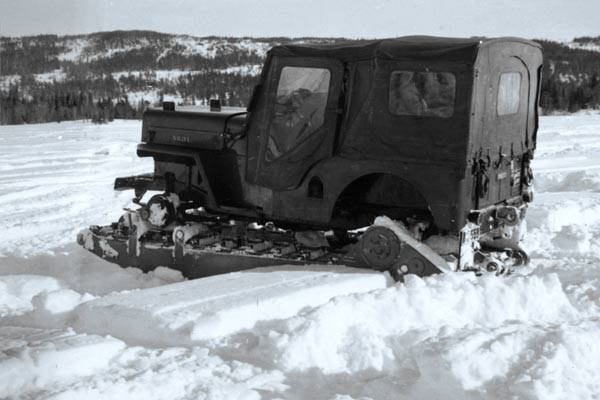 Leif Hellström found these photos in the Swedish Army Museum in Stockholm in early 2018.

Odd Egil Torgersen in Norway told us "I think this caterpillar CJ-3B was built in in 1953 by Scania-Vabis." (A long-standing Swedish car and truck manufacturer, Scania-Vabis merged with SAAB in 1969, and still makes heavy trucks and buses.) According to The Jeep in Sweden by Stig Edqvist, the tracks were actually supplied by a Swiss company. 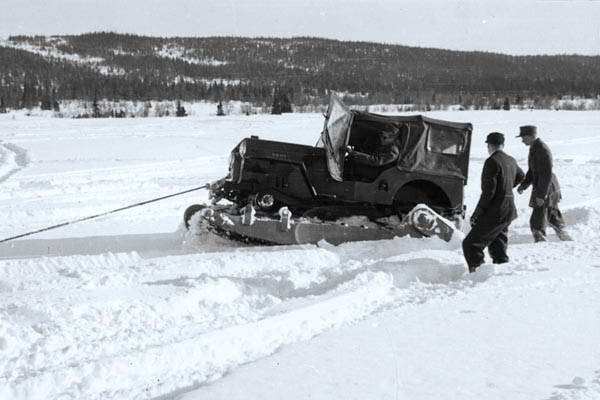 Leif says, "There is little info available in the museum beyond the photos themselves and the date 1955, but the vehicle was tested by the army, together with assorted other vehicles, for its effectiveness in snow. The Jeep carries a civilian number plate (from the Stockholm area) so it was obviously only a demonstrator. No idea how effective it was, but the tow line in one of the photos may be a clue...." 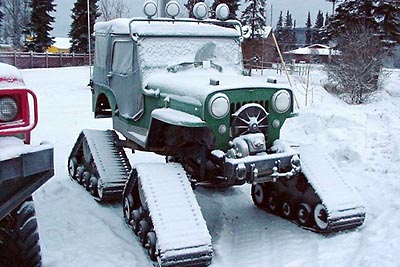 Matt Brookins ran across this photo from Alaska. The owner of this CJ-3B has gone to some trouble and expense to equip it with full tracks.

Scott Blystone suggested they look like the track kits manufactured by Mattracks which sell for about $15K. Erik Dossett in Alaska said, "They are not Mattracks. These are snowmobile tracks, while Mattracks use rubber belts. I saw similar tracks or perhaps the same, on a CJ off-road in Alaska in the summer of 1977, so they could be used year round." 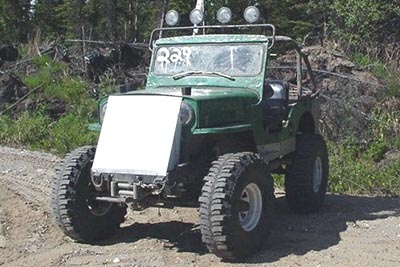 Well, we found out that this one mounts big tires in the summer. Merrill Fales, who took the winter photo in Fairbanks, spotted the same Jeep in the pits at the Interior Racing Association mud bog at Delta Junction in June of 2001. See also a rear view photo of what the rig looked like after the event (80K JPEG.) 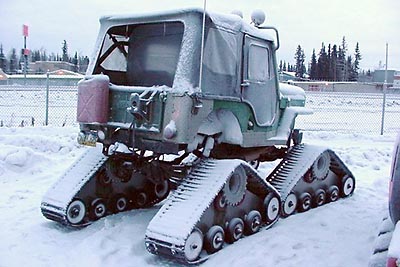 Merrill sent us some more of the winter shots including this rear view and a close-up photo of the tracks (70K JPEG). He says, "They were taken in January of 2001. Rig in question is liable to be seen anywhere -- he gets around. IIRC, rig runs SBC and TH350, D18."

A wider view of the parking lot reveals a big Willys wagon (70K JPEG). Merrill says it has a stretched cowl, 502 Chevy, 205, and air bag suspension. 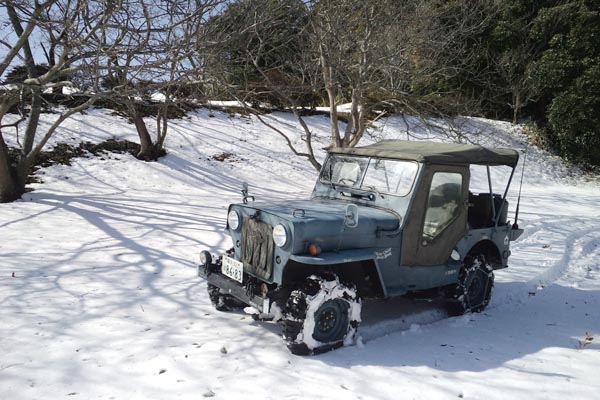 Chains all around: Hidemi Hishikawa in Yokosuka, Japan photographed his 1963 Mitsubishi J3R in the snow early in 2016. Hidemi often uses photos of his Jeep on the New Year's cards he sends out every year. 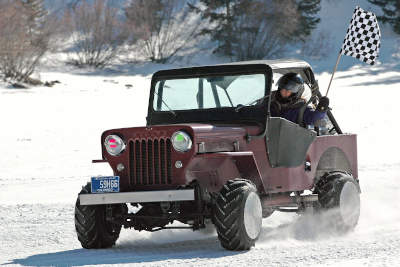 Our Gang 4 Wheelers in Georgetown, Colorado has been organizing ice races for 33 years. They're out on Georgetown Lake on five weekends every January and February, with racing in a variety of classes. There are lots of old Jeeps, including the Gleason family CJ-3B seen here winning a studded tire class in 2007. 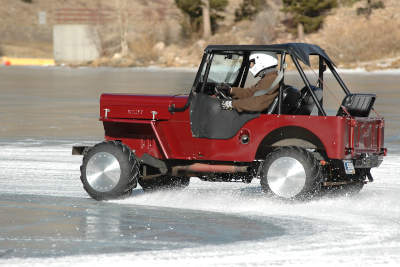 Here's the Gleason 3B on the course in January 2006. Thanks to photographer Michel Skatges for these shots. 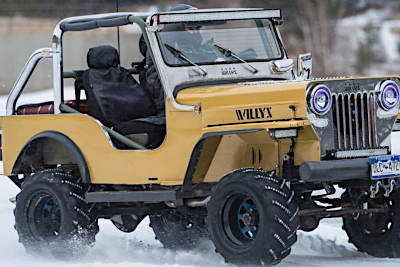 There is still lots of action on Georgetown Lake in 2021. This Jeep belongs to Kevin Boog, who was one of the original club members who started the races at Georgetown about 40 years ago. 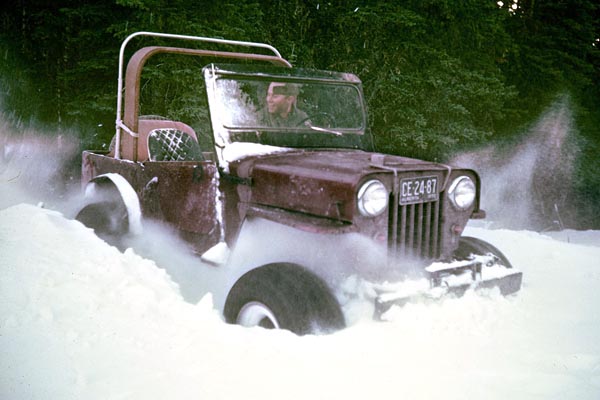 Looks like another 3B in Redwood Poly, and he coud use those studs because he's not going anywhere this way. He's a member of Alberta's Four Wheel Stampeders, on one of their winter outings circa 1970. The half doors are nice, but they don't offer much protection from the flying snow. 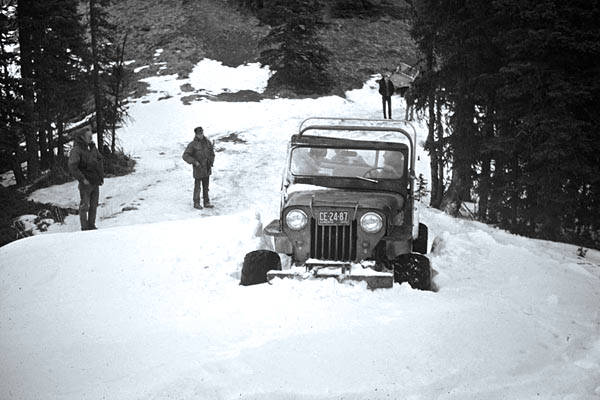 I guess this is how he got into the situation, and his passenger bailed before the top picture was taken.

The photos are courtesy of Four Wheel Stampeders 1968-1975 on Facebook. 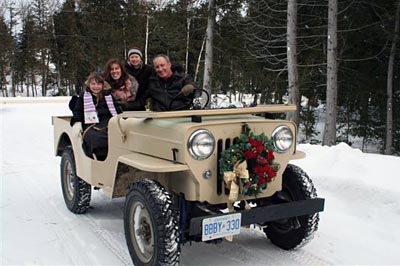 Pat McIntyre is near Ottawa, and shortly after finishing his 1959 CJ-3B Frame-Up Restoration, Pat got the whole family into the Jeep for a ride at Christmas 2007. 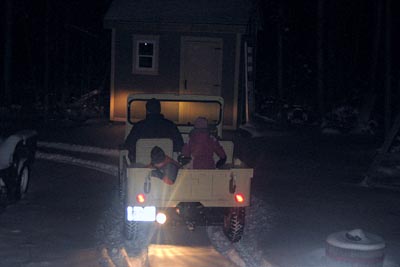 The kids were also eager to go on a moonlight drive in the first snow of the winter in Ontario. 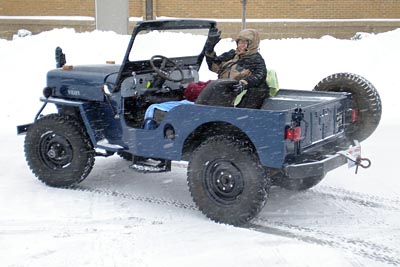 David Bucher is a member of the Mid-Tennessee Vintage Willys Club and took this picture of his wife Donna in their 1953 CJ-3B shortly after buying it in 2008. David said, "We bought the Willys in January in West Carrolton, Ohio which is a suburb of Dayton. When we got the CJ it was driveable but it had many things that needed repair such as brakes, rotten wiring harness, etc. Today was the first time that we have had the Jeep out for any extended driving."

"The previous owner installed a tilt steering column from a Chevy Camaro or Nova, and a Saginaw steering gearbox. My plan was to put an original column and steering gearbox back in the Jeep, however after driving the CJ with this setup I am going to leave it as is. I had read about this modification on CJ3B.info and it does significantly improve the steering. I would like to find a steering wheel of a diameter closer to the factory steering wheel." 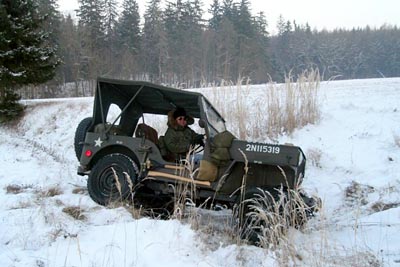 Ladislav Sulc and his CJ-3B in U.S. Army livery including military-style tilt roof, are seen playing in the snow near Prague. Lada did a frame-up rebuild of the former Swiss Army Jeep; see more details in Things Are Not Always What They Seem... on CJ3B.info. 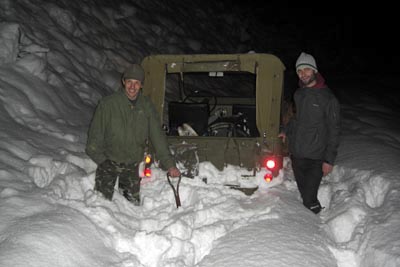 Heinz Holzner in northern Italy also restored his Spanish Viasa CJ-3B as a World War II jeep (210K JPEG) complete with pioneer tools on the side. The shovel came in handy on an excursion in the snow in early 2014. 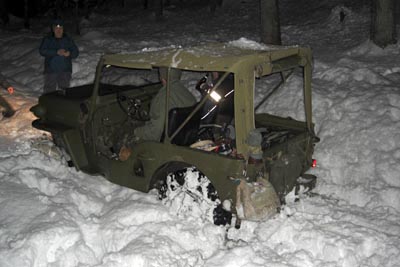 Heinz says he and his friends took advantage of a lot of snow in the Alps this winter, to put a set of four chains on the Jeep and take a few trips. 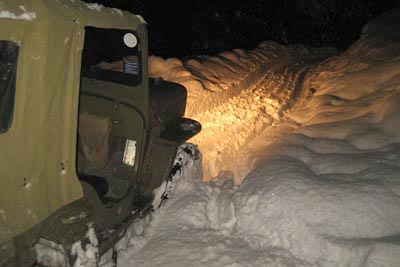 Thanks to Heinz for the great nighttime shots.

Meanwhile, he now has a real WWII jeep in his garage, and he's starting a restoration of the Ford GPW (100K JPEG) built in September 1942. 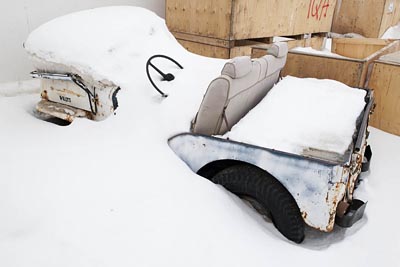 Iqaluit, Nunavut in northern Canada, gets an average annual snowfall of 93 inches, and it is dark and cold in January (average high temperature is -27C or -17F) so any snow that falls, stays around.

Photographer Ron Wassink speculated that this Jeep he spotted in Iqaluit in 2011 was military surplus, and the rear bumperettes suggest that might be the case. 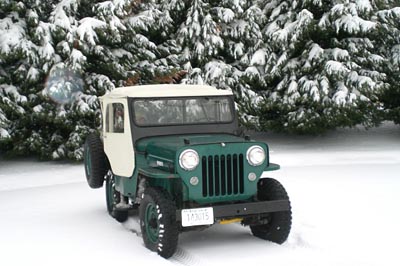 Lawrence always takes his Jeep in the local Christmas parade, and there's never snow on the ground for that. But the 2011 storm came just 3 weeks after a very rare white Christmas. 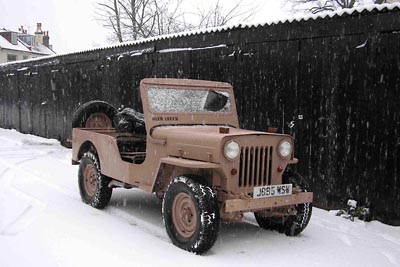 Many of us have experienced the situation, where the first snowfall catches you before you get the top back on the Jeep. John Carroll took advantage of the opportunity to test his electric wiper, and get a nice photo. This is his "Beer Truck," built from Willys, Mahindra, Viasa, and Hotchkiss parts. It was featured on our cover page in 2007; see CJ3Bs in the Sand. 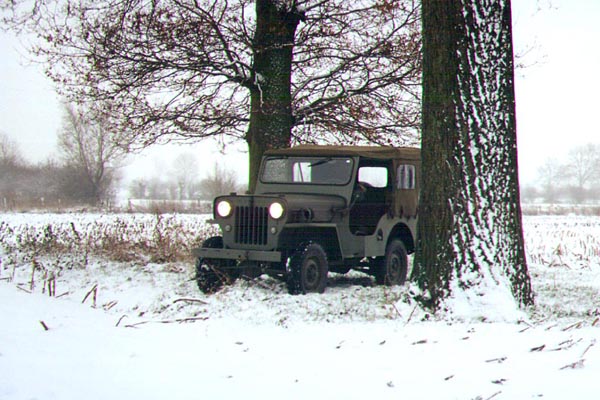 Piet Versleijen's photo of his ex-Swiss Army CJ-3B in the Netherlands was the cover photo on CJ3B.info for Christmas 2001. For warmer weather photos of the same Jeep, including a similar pose on a Mediterranean beach, see CJ-3B Vacation in France on CJ3B.info.

See also Snow Day! and Snow is the Maine Attraction on CJ3B.info.