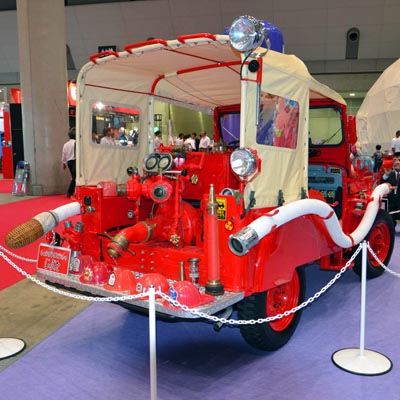 Here's a good look at a Universal Jeep converted into a fire engine by powering a pump from a center-mounted PTO. This arrangement was different from the front-mounted pump found on the Willys Jeep Fire Engine, but it was used on several different CJ-3B Fire Jeeps Around the World.

This Mitsubishi Jeep pumper built in Japan under license from Willys, was restored by Yasui Ichiro. The photos from the 2013 Tokyo International Fire and Safety Exhibition are courtesy Shoji Toshio, a firefighter in Tokyo.

The rear view shows why Willys didn't take this approach; with the pump in the rear, there isn't much room for equipment storage. It also shows a very-Japanese basket-woven filter on the suction hose. 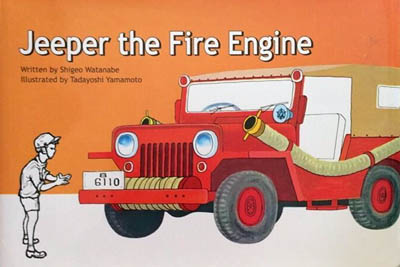 The inspiration for the restoration project was the children's book Jeeper the Fire Engine by Shigeo Watanabe, with illustrations by Tadayoshi Yamamoto. It was originally published as Shōbō jidōsha Jiputā (40K JPEG) in Japan, where it has sold a million copies over fifty years.

The book tells the story of a small city fire department which had a ladder truck, a pumper and an ambulance. Whenever there was a fire in town, the three big vehicles raced to the rescue. The pumper boasted, "When I start pumping, even the most ferocious blaze doesn't stand a chance."

But there was also a much smaller fire truck known as "Jeeper." 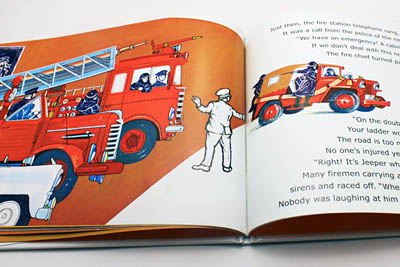 Jeeper was a hard worker (70K JPEG) and did well in fighting small fires, but the larger vehicles laughed at him.

Then one day an opportunity came for Jeeper to prove himself truly indispensable: a cabin in the mountains nearby was ablaze and threatened to start a forest fire. The other vehicles were too big for the narrow mountain road, but Jeeper put out the fire singlehandedly and became a hero.

The book has been a favorite for many years in Japan, and was published in English in 2006. 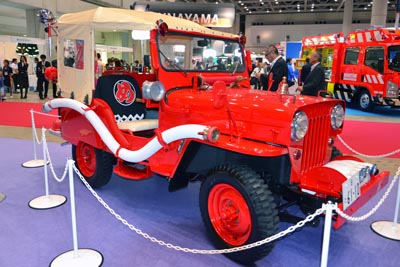 Yasui Ichiro has re-created "Jeeper" by restoring a 1960 Mitsubishi fire engine based on the CJ3B-J3. The J3 can be mistaken for a Willys Jeep because Mitsubishi retained the "WILLYS" stamping on the right side of hood of the Jeep, which was built under license starting in 1953. But it also has "MITSUBISHI" on the left side, and both WILLYS and the Mitsubishi triangle logo stamped on the front grille. 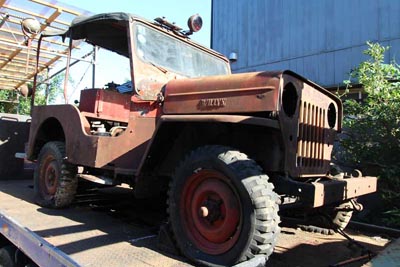 The scale of the restoration is apparent from this "before" photo taken by Gao Nishikawa for Orm-Web. Both the Hurricane engine and the pump were frozen.

The Jeep did not have the extended front bumper and hose rack, which were added during restoration because they are a distinctive feature of Jeeper. They're also a good use of the space, since there isn't much storage in the back. For this configuration to be practical as a first-response unit, it would require a trailer to carry water and hose. 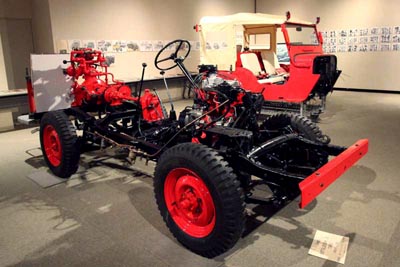 The restoration was put on display before it was even completed, at the annual summer four-wheel-drive exhibition at the City Museum in Iruma, near Tokyo, in June 2013. Photo by Kota Rob for the Journey of Edo blog.

The body-off display was an excellent way to showcase the pump and PTO drive. See a rear view (80K JPEG) which also shows some of the other vehicles on display. 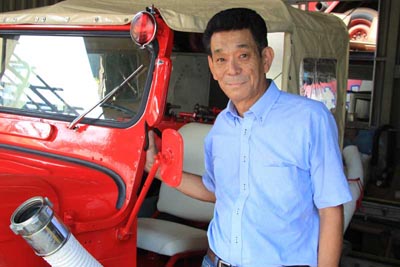 Yasui Ichiro poses with his almost-complete restoration of Jeeper, or "Jiputā" in Japanese. Photo by Gao Nishikawa, who also took the detail shots below. 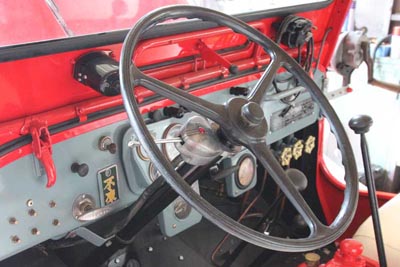 This interior view shows the power-take-off, and the dashboard with light switches, pump controls, pressure gauges and valves. In the background is a hand-operated siren on the passenger side.

Although many Mitsubishi Jeeps had diesel engines, the CJ3B-J3 had a built-in-Japan Hurricane gasoline engine (110K JPEG). 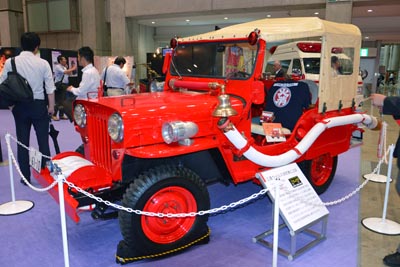 The Mitsubishi fire engines also had an electric siren, mounted on the fender (which has always made more sense to me than the siren in the center of the hood on the Willys Jeeps.)

And the brass bell is a detail from the illustrations in Jeeper the Fire Engine. Nobody is going to be able to say they didn't hear this Jeep coming.

The display in Tokyo included the book and a model of Jeeper, on the driver's seat.

Thanks to Morihisa Ochi, and to Shoji Toshio, Gao Nishikawa and Kota Rob for the photos. -- Derek Redmond

See other Mitsubishi Jeeps on CJ3B.info.