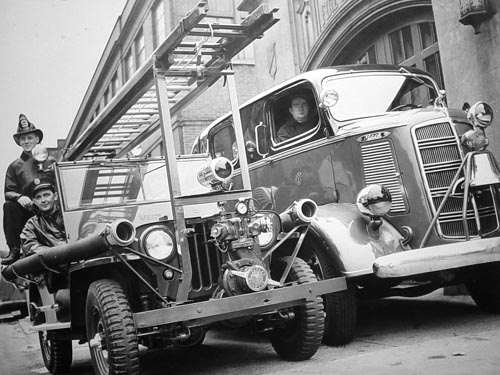 This photo from the collection of Thomas Engle, was taken on 16 May 1946 by Acme Newspictures for United Press Newspictures. It shows what is certainly one of the earliest CJ-2A Fire Engines in service.

It's apparently a delivery photo of a unit built on a very early 1946 CJ-2A Jeep, posed beside a 1940 Mack Model E squad (40K JPEG) in the Chicago Fire Department's red and black livery.

Jeffrey Smoker points out that the Mack is also a pretty rare piece of apparatus; it's a Type 45U cab-over-engine squad, with a large deck gun. Only 17 were made, and Chicago bought 12 of them including 10 in 1940, as well as some Autocar COE squads. 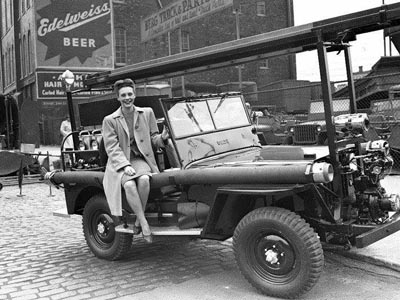 Luckily another photo, possibly from the same photo shoot, has also survived. The Jeep is parked in front of a row of surplus jeeps at Berg Truck & Parts Co., known in Chicago as "The King of Jeeps." Reportedly Hyman Berg's wife Etta is sitting on the Jeep.

It has a Darley Champion pump, but the side-mounted suction hose and the design of the ladder rack and rear storage is similar to the CJ-2 Fire Jeep built by American Marsh Pumps. Any further details on this CJ-2A and where the conversion was done, are welcome. 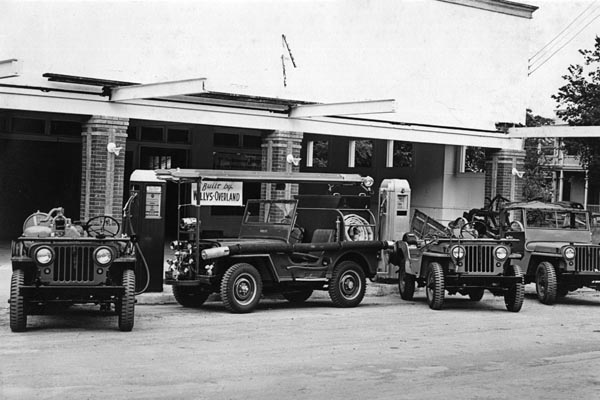 A similar model appears in a photo reportedly taken at a Willys dealership in Boerne, Texas. This is possibly one of Willys-Overland's travelling demonstrations of special equipment; the Fire Engine is posing with a trio of CJ-2As equipped with an air compressor, welder and plow. 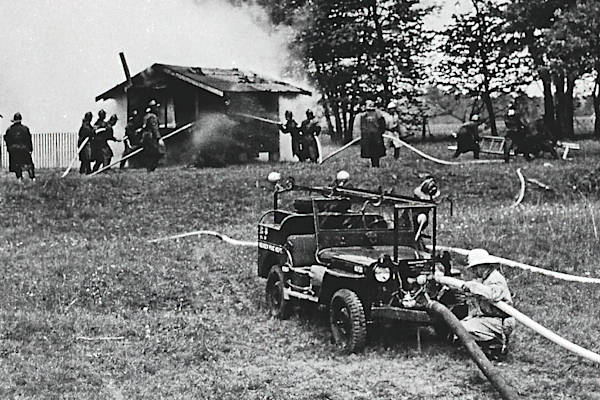 This picture was taken during a live burn demonstration in Berkey, Ohio, in 1946. Richard Janney, now of Michigan, was present as a young boy with his dad, fireman M.H. Janney.

The full photo appears to show young Richard in the trees to the right, and "Berkey Fire Dept." is painted on the Jeep. Chief William Farley monitors the pump which feeds two hand lines.

The small siren on the cowl is similar to the prototype Agrijeep fire truck. 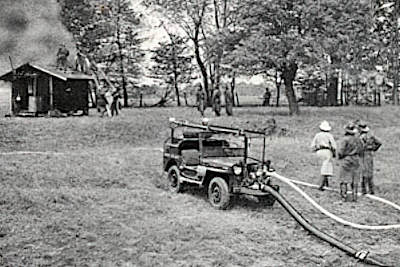 The 1955 catalogue of Jeep Vehicles in Public Service includes another photo from the same demonstration, apparently taken earlier as the firefighters used the ladder to vent the roof of the small structure (170K JPEG). Again it looks like Richard is watching in the background.

The Volunteer Fire Department at the time was housed in the garage of Mr. Janney's store in Berkey, a village just west of Toledo. This live burn was staged as part of the Berkey VFD's evaluation of the Jeep, on loan from Willys-Overland. 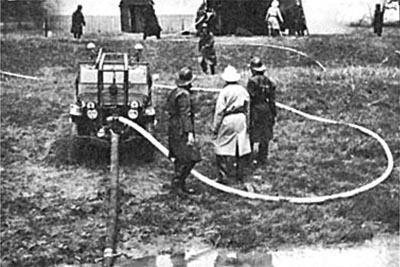 The 1949 Willys booklet Jeep Operation Data (130K JPEG) also contains a photo of the event. This front view shows the warning lights mounted on the front supports for the rack. 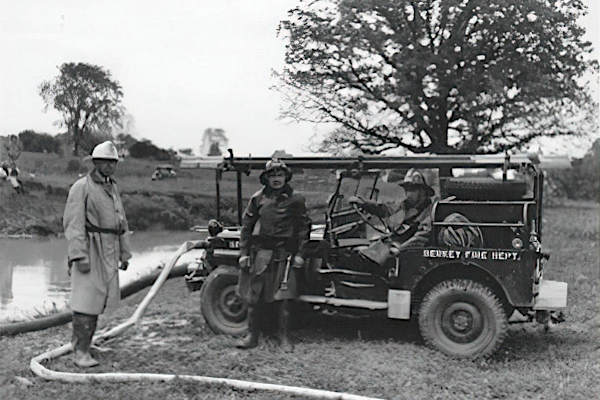 The spare tire mounted on top of the rear compartment is another detail seen only on this Jeep and the Agrijeep fire truck.

Photo courtesy of History of the Richfield Township Fire Department. 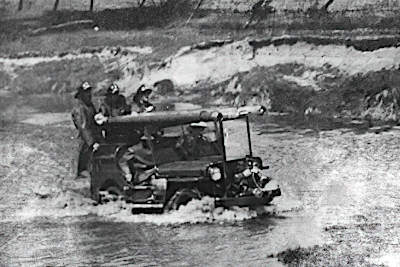 Another photo shows five volunteers on board as the Jeep drives across the creek. 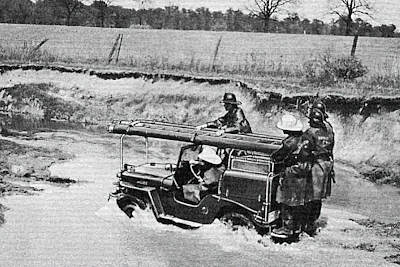 A shot of the Jeep in the creek from The Jeep in Industry was slightly retouched by hand.

And when Jeep Vehicles in Public Service used that photo again in 1955, it had been much more heavily retouched to look like a CJ-5 (50K JPEG) with one more firefighter hanging on the side! 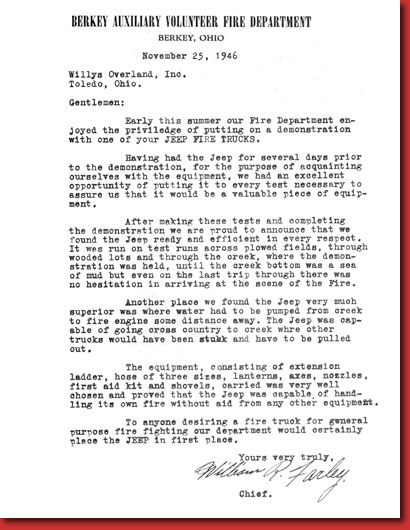 Chief Farley sent Willys a letter describing his department's 1946 evaluation, including the comment that "the creek bottom was a sea of mud but even on the last trip through there was no hesitation." He found the Jeep "ready and efficient in every respect." This letter was later reproduced in a Willys promotional booklet found by Dave Eilers of eWillys.com.

Note that it was still being referred to as the "Jeep Fire Truck", a name that was soon changed to "Jeep Fire Engine", probably to avoid confusion with the larger Willys Commando Fire Truck.

The Berkey VFD reportedly purchased the Jeep for the discount price of $1100. It has also been reported that the vehicle initially tested at Berkey was the First Civilian Fire Jeep, a CJ-2 Agrijeep modified by American Marsh Pumps. The frame cracked during the tests, and the CJ-2A purchased was a replacement. 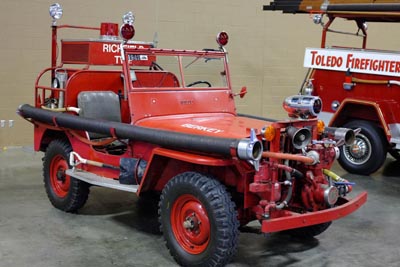 The column-shift 1945 CJ-2A, serial number 11822, went into service with the Berkey VFD and remained with the renamed Richfield Township Fire Dept. until being sold at auction in 2021. The overhead rack was apparently cut off, the suction hose supports moved back down, and a large siren mounted on the front. The Jeep probably became exclusively a brushfire unit, not requiring a ladder, and a pre-connect for the booster line runs back along the suction hose brackets.

It was photographed by Bob Christy at the 2016 Toledo Jeepfest. See more photos of the Berkey Test Jeep For Sale on CJ3B.info. 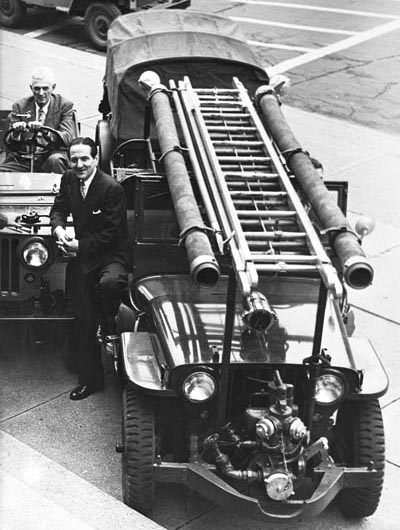 A.J Wieland, Willys-Overland vice president in charge of distribution, sits on a Fire Engine in Toledo in June 1946, as a motorcade of special equipment Jeeps prepares to leave for Mexico, to give demonstrations to dealers and government officials.

This version of the Fire Engine has open storage compartments and a narrow overhead rack, similar to the Chicago Jeep, but the suction hose storage has now been moved up onto the rack, and the siren is mounted on the hood.

Thanks to Jan Hogendoorn, and the National Archives in the Netherlands who saved the photo. 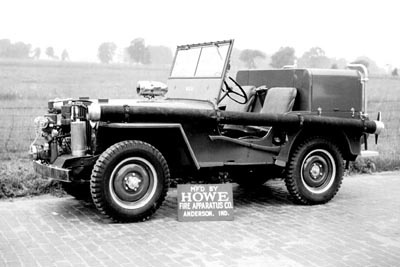 Apparently Howe also offered the Jeep from the factory with no ladder rack, as an optional configuration. I have no date or other details on this factory photo, showing a CJ-2A with no ladder but with a rear storage compartment that is now enclosed. 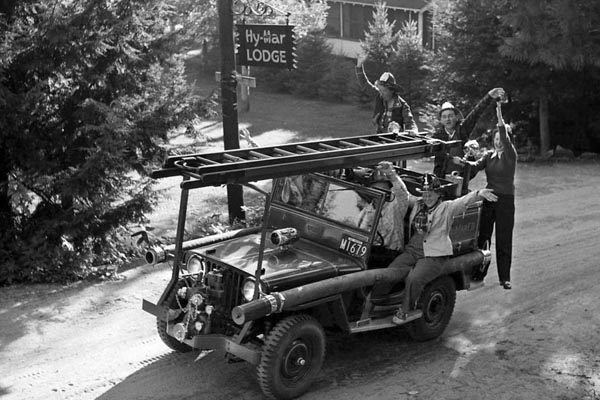 An unidentified conversion, photographed for LIFE magazine in Massachusetts in 1949, has some differences including the front bumper and a wide overhead rack carrying only the ladder. 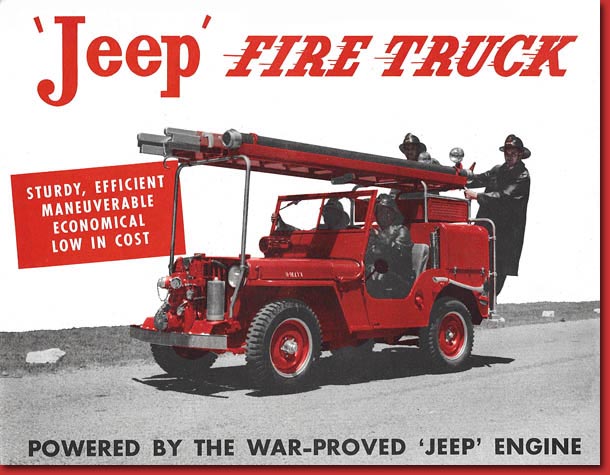 The first advertising brochure was a large, 6-page folder which invoked Jeep's wartime reputation. It also still used the "Fire Truck" name, so it may have been prepared as early as late 1946. It showed the configuration which became standard for the next two decades, with a tubular steel overhead rack and handrails, and covered accessory storage on the sides. See the full brochure in Jeep Fire Equipment Literature. 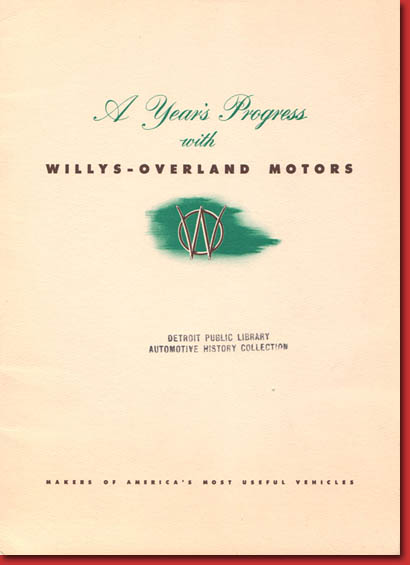 This booklet titled "A Year's Progress" was given out during "Institutional Day" on 15 October 1947, when hundreds of VIP's were invited to visit the Willys-Overland plant. One page is a "Calendar of Events" (60K JPEG) listing corporate achievements since October 1946. An entry for 10 March 1947 states "Jeep Fire Engine introduced."

This would indicate that early examples such as the Jeeps tested in Chicago and Berkey, were actually pre-production models. The March 1947 "introduction" may mark the adoption of the final standardized design.

Thanks to Bill Norris for scanning the booklet at the Detroit Public Library. 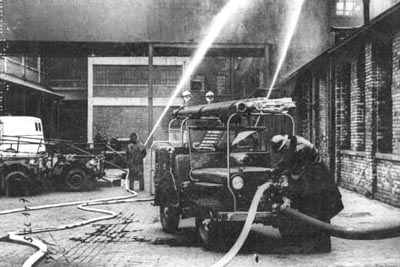 Gary Urbanowicz found a photo showing a CJ-2A Jeep Fire Engine with the standard overhead rack, supplying two hose lines at an industrial location. There are other Jeep vehicles in the background, and I suspected this was a demonstration by the fire brigade at the Parkway Jeep plant in Toledo, since there is no sign of an actual fire. 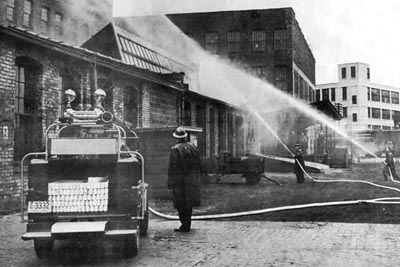 A shot from the opposite angle includes the same pump operator, wearing a normal hard hat rather than a fire helmet, and the building seen in the background confirms the location as the Toledo factory. 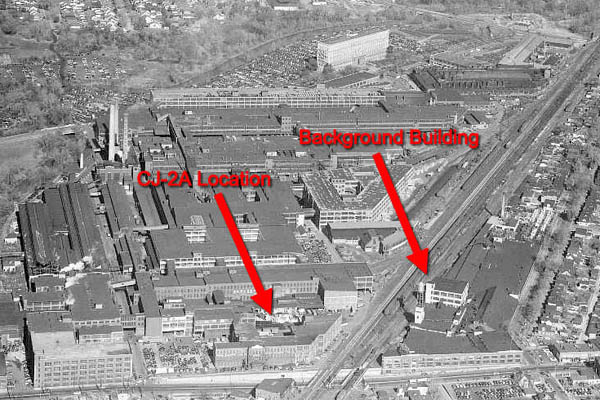 An aerial view of the factory, looking east along the railway track, shows that building across the track from the Willys plant. If you look closely you can also see the clerestory windows which are being washed in the photo above.

The 1957 aerial view by Norman C. Hauger is from The Parkway Plant From the Air on CJ3B.info. 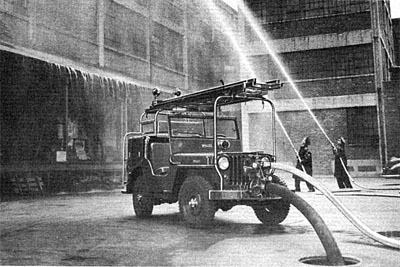 A hand-retouched photo from The Jeep in Industry appears to be the same demo, but has the Jeep in a slightly different position. Looks like the hosemen are moving around, washing the windows on all the surrounding buildings. 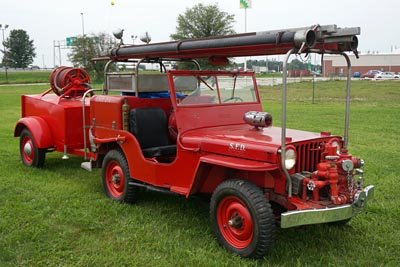 Art and Darlene Gloss' Jeep Fire Engine must be one of the first with the later style of overhead rack and enclosed rear storage found on most of the 2A's converted by Boyer Fire Apparatus and Howe Fire Apparatus. It's a 1945 CJ-2A which was apparently converted by Howe in 1947 and repainted from Harvest Tan. It's seen here in 2014 in a photo by Bob Christy, complete with its water trailer. 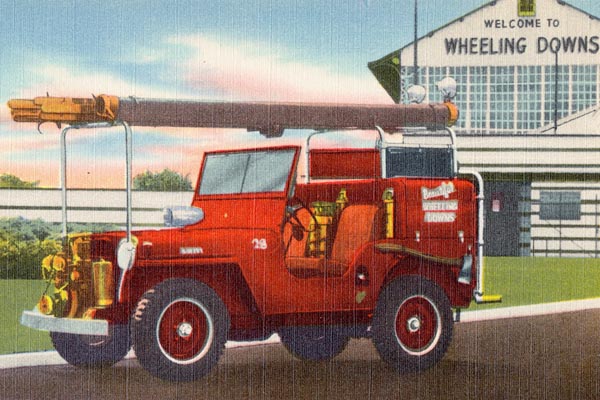 See also a photo of a similar Jeep at Aqueduct Race Track, in Fire Jeeps in New York City 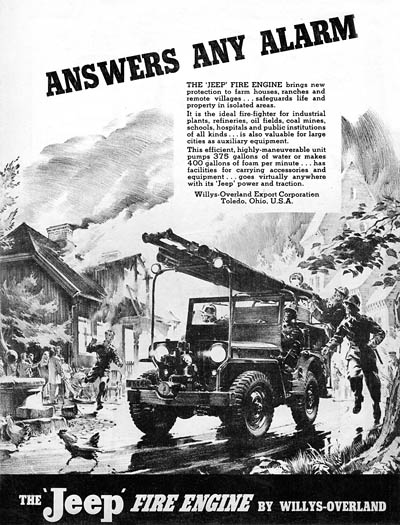 Willys-Overland Export also saw an international market for the newly-standardized Jeep Fire Engine. They placed this high-profile (and probably expensive) ad inside the front cover of Time magazine's European edition on 1 September 1947. The artist was clearly portraying a European fire brigade.

Thanks to Jan Hogendoorn for this rare item.