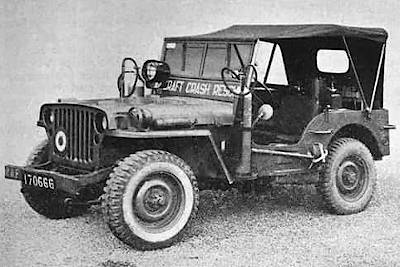 Issued in 1944, the Royal Air Force "Ford/Willys, 5 cwt. 4x4, equipped as Aircraft Crash Rescue Tender" was a 1/4-ton jeep converted in the UK to carry rescue, fire and medical equipment. The jeeps were apparently standard olive drab, with the "panel at the base of the windscreen painted in red and the words Aircraft Crash Rescue painted thereon in large letters of a contrasting colour." 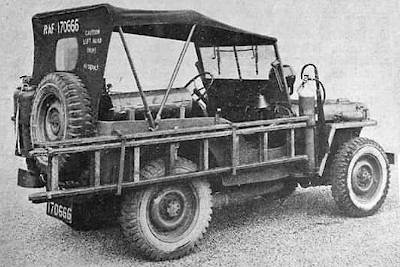 The jeeps had the advantage of fast response across rough terrain, although they could not carry as much equipment as larger wartime fire tenders such as an RAF Weeton conversion (60K JPEG) on a Fordson WOT 1 chassis.

Specifications for the jeeps describe a hand bell fitted on the off side of the dash, for operation from the front passenger seat. 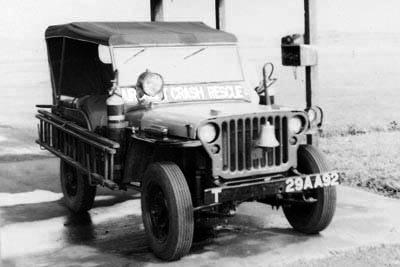 Gordon Smith in the UK has provided some photos and further details of these jeeps. An 8-inch diameter Atlantic searchlight was mounted on the off side of the body between the windscreen and engine bonnet.

On the tender seen at left, someone has wisely moved the bell to the front grille. 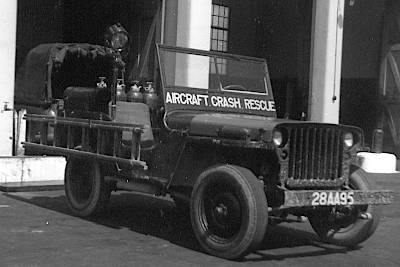 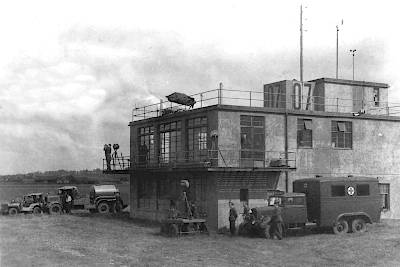 Visible in the photo (see a larger copy, 230K JPEG) is a jeep and a larger fire tender (130K JPEG), an ambulance and a spotlight trailer. 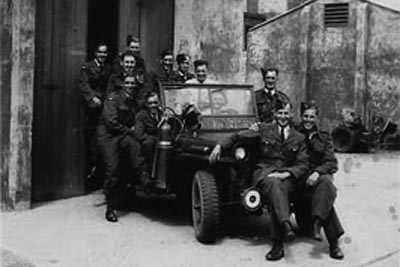 Another photo, courtesy of Gary Bainbridge, shows RAF Fire Service personnel in a lighter moment at Tempsford in 1944-45. 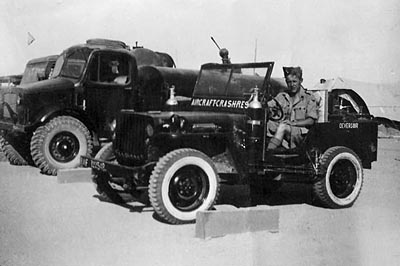 The jeeps remained in service until the early 1950s when they were replaced by the Land Rover Series 1 Aircraft Rescue Tender.

Gerald Lilley saved this photo from his service at RAF Station Deversoir in the Suez Canal Zone, 1949-50. He comments that the jeep was soon to be replaced by a Land Rover, and that it was easily stuck in the soft sand.

See also another shot of the fire tender (40K JPEG) seen in the background here. Thanks to Gerald for scanning the photos.

Thanks to Gordon Smith for the photos and details of the jeeps. Also R. Langham for the Fordson illustration, and Gary Bainbridge and Peter Haining for the Tempsford photos. -- Derek Redmond