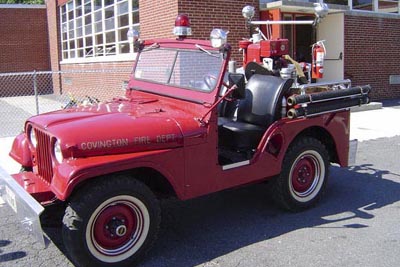 Firefighter Jason Linkenhoke says, "In the late 1960s, the Covington, Virginia Fire Department converted this 1953 military Jeep into a brush truck to be taken over the bridge into the Idlewilde and Indian Valley area. The bridge's weight restriction prevented other fire apparatus from crossing over into the Idlewilde area. The Jeep was fitted with a pump, water tank, lights, siren and other firefighting equipment. It served in fighting brush fires and was critical during the time when the weight limit was lowered on the steel bridge. 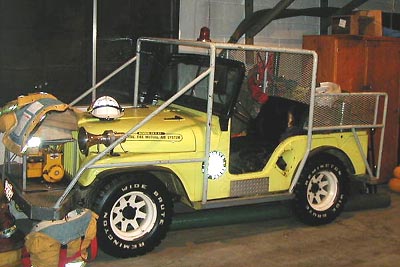 Joe Barrett, Assistant Chief of Barnet Fire Department in Vermont wants to make sure we know that not all fire Jeeps are red. Joe writes, "Jeff Berwick and his firefighters in neighboring Peacham, VT (see Peacham's red CJ-2A) are a great bunch and we in Barnet are glad to have them close at hand, but this is a picture of Barnet's 1954 M38A1 fire Jeep that is still in service at this time. It will go about anywhere we wish to put it. It holds 55 gallons of water plus backpack pumps and hand tools." 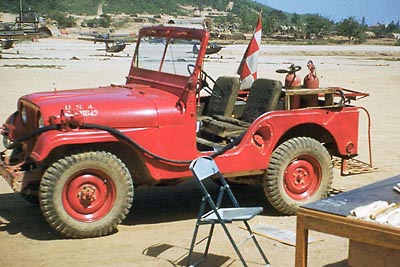 Many vehicles wear olive drab rather than red when they're in military fire service, but this Jeep was already in a coat of red paint when it was photographed by Leon Bowie in service at airfield A160 in Korea in 1954-'55. The fire extinguishers and the rear platform might qualify it as a fire truck, but what looks like a black hose is actually an auxiliary power cable for starting airplanes. The photo is courtesy of Merl's Garage. 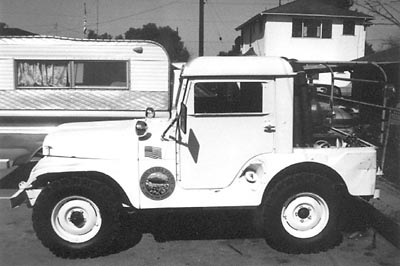 The Santa Clara County Fire Department received this Jeep when Santa Clara absorbed the former Los Gatos Fire Department in 1970. SCFD inherited two military surplus Jeeps (and a 1967 Wagoneer) from Los Gatos. This photo from the Department's archives shows Utility 3, a 1952 M38A1 used by the Training Division. When sold as fire department surplus in 1972, Utility 3 was described as having front bucket seats only, directional signal lights, a metal half-top and no spare; minimum bid $650.

See also Utility 2 (20K JPEG), in a photo from the collection of Jim Ackley, published in 1972 when the Jeeps were released for sale. 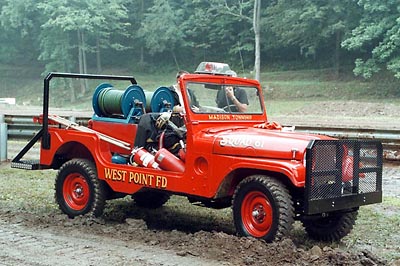 This former M170 ambulance, converted by the West Point Fire Department, was photographed in Lisbon, Ohio by Bob Christy, who says, "It had the smoothest running F134 I've ever heard, and was in great shape. According to the plate on the dash it was built in March, 1954."

Only a few thousand four-cylinder M170s were produced for the U.S. military from 1954-64, many outfitted as field ambulances. The large passenger-side door opening (which now provides rapid access to West Point's equipment) originally allowed the mounting of the spare tire inside the body on the passenger side, to permit stretchers to extend over the tailgate where the spare would normally be on a military Jeep. 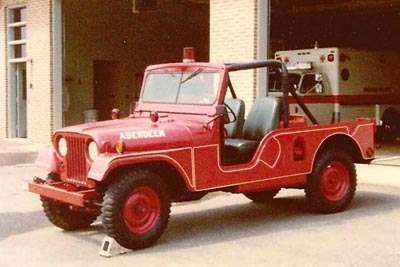 Thanks to Jason Linkenhoker of Covington, Joe Barrett of the Barnet FD, and Arleigh Movitz of the Santa Clara County FD. Also Alfred Heibert, Dale Jonas and Jarek Skonieczny for spotting fire Jeeps on the web. -- Derek Redmond