General Fire Truck Co. built fire apparatus starting in 1926 in St. Louis, then moved to Detroit from 1937 to 1957, and during their last few years in business they were apparently the principal company producing the Commando pumper for Willys Motors.

This postcard shows a General Commando with an open cab. This "semi-cab" often appeared in advertising, but judging from surviving examples was not as popular as the optional closed cab. 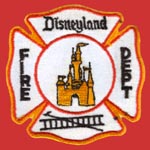 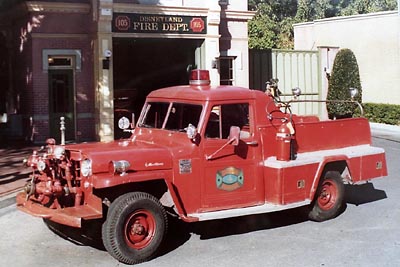 According to an 1993 article in Firehouse magazine by Mike Heller, "There has always been a fire service at Disneyland. When the park officially opened on July 17th, 1955, Disney acquired a 1954 Willys Jeep with a front-mounted pump for fire protection and staffed it with ex-military personnel."

That Jeep was a Commando built by General Fire Truck, and probably delivered to Disneyland through a Willys dealer. Much of the equipment usually ordered with a Commando, including ladder, suction hose, and nozzles, is no longer on the truck in this photo, which likely dates from after the truck was replaced in service by a 1981 Chevrolet mini-pumper.

For any very rare major incident at Disneyland, there is a mutual-aid arrangement with the Anaheim Fire Department (which is also of benefit to the city since the park has some 18 million gallons of water on site.) 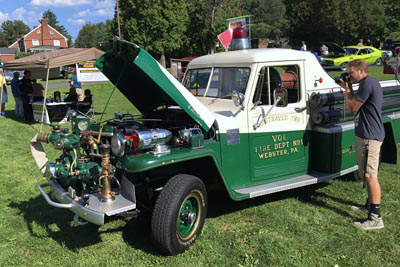 This 1955 General Commando belonged to Rostraver #1 Volunteer Fire Department, in Webster PA. It was not the first piece of apparatus at Rostraver #1 VFD, since they were founded in 1949, but was a treasured piece of their history. As of 2018 the truck showed about 12,000 miles.

The pump platform is shorter than on the later conversions by Howe Fire Apparatus, so it has a piece of tubing welded to the front to protect the pump intake. 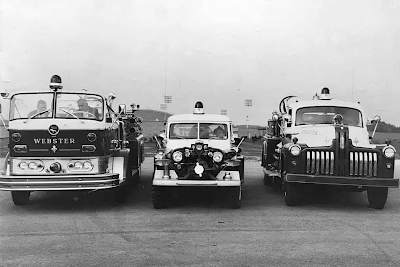 A Webster apparatus photo circa 1961, courtesy of Bonnie Hart Rozik and Rostraver #1 VFD, shows the Willys with a 1961 Mack and an early-1950s Federal pumper. 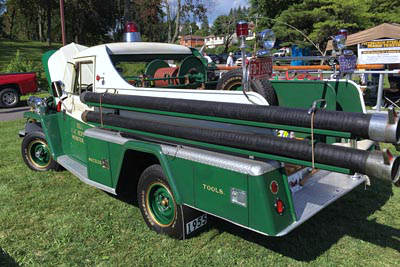 Another distinctive feature of the General Commandos is an indentation in the top of the water tank, allowing the booster reel to sit lower than on the Howe version.

See also a rear view of the hose bed (400K JPEG). Thanks to Joe Gagliani for the photos taken in 2016 at a car show in Monessen PA. 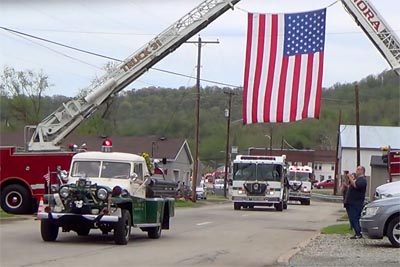 The truck led a huge cortege of apparatus at the funeral for Captain Michael Godzak of Rostraver #1, in May 2018. 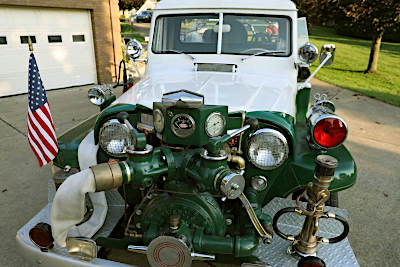 On the front bumper is a Waterous 500 GPM pump.

The spotless engine compartment (400K JPEG) includes a newer alternator, probably necessary to keep all the lights on the truck operational while idling or in parades.

The interior (350K JPEG) still has the two-way radio whose antenna is seen in the 1961 photo above. 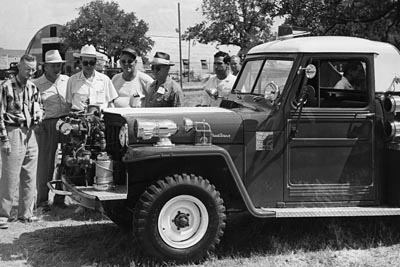 This photo taken by Ron Logan of College Station TX is hand-dated 1945 on the back, but is clearly more like late 1950s. It shows some men admiring a brand new Commando, with its General builder's plate on the side, but not yet lettered for a fire department. This may be at the fire training school at Texas A & M in College Station.

Photo courtesy of the Fire Museum of Texas and Texas History 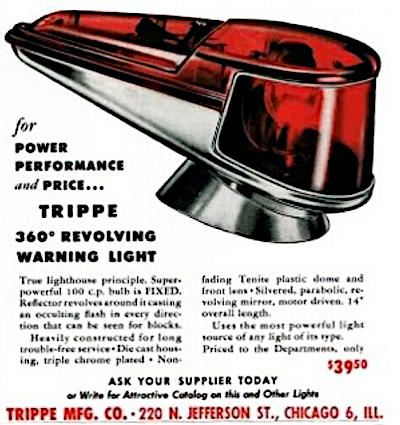 In the above photo, I noticed the unusual streamlined roof beacon, identified by Andy Hogencamp as this Trippe Mfg. revolving light. Andy commented, "Neat looking. Crap signal." This light has also shown up on a 1957 Willys from Valley Fire Truck and an unidentified conversion seen in More Willys Fire Trucks.

In the early 1950s Grandville MI was undergoing quite a bit of expansion and was faced with the need for another piece of fire apparatus. The equipment needed had to meet a "Class A" rating yet a full sized pumper would not fit in the department's station. A Commando, built on a Willys 6-226 special fire truck chassis by the General Fire Truck Co. in 1954, was purchased through Home Acres Willys in Grand Rapids, as Engine 153. This photo shows the Grandville Fire Department in 1960, including Engine 153. 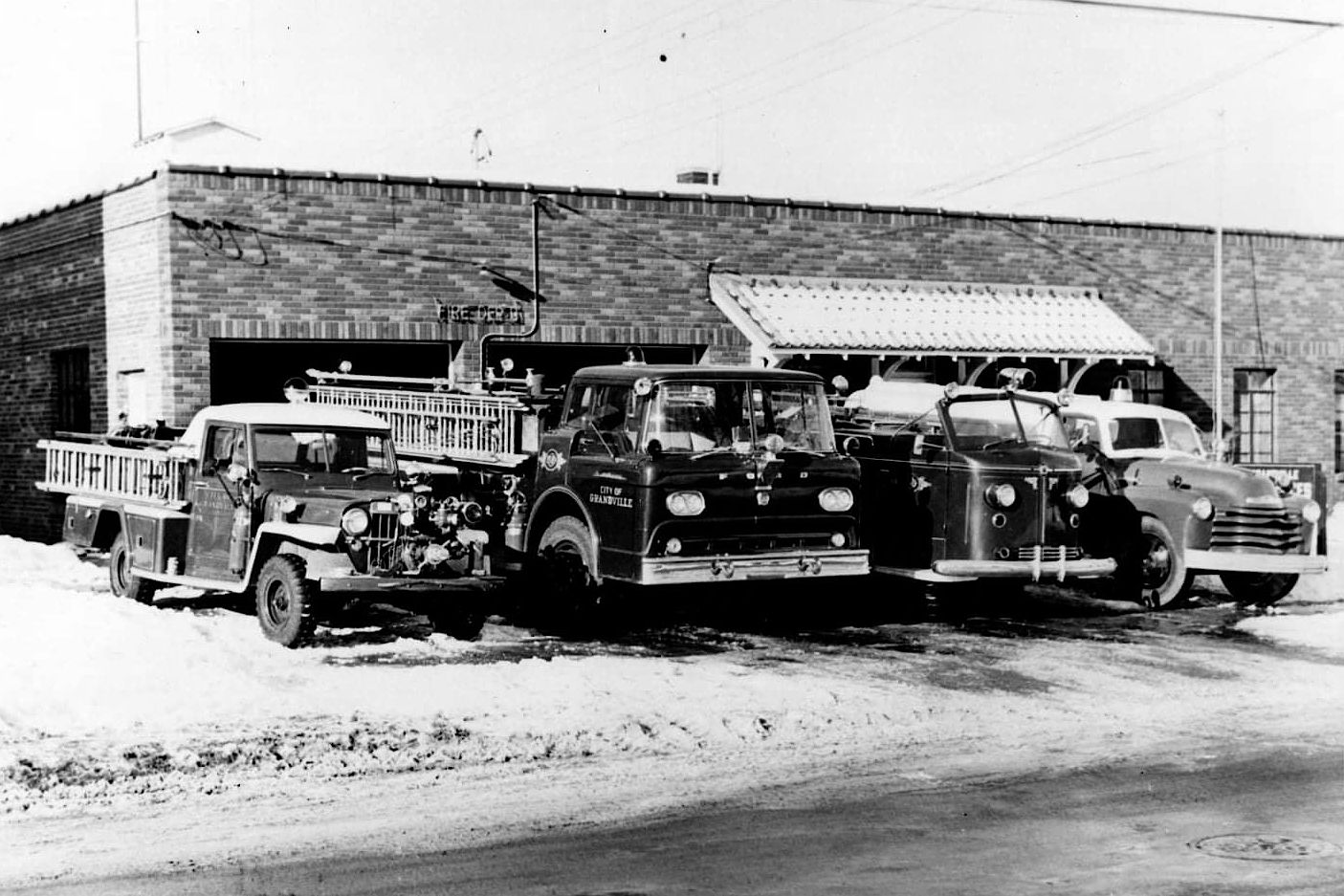 The Commando had a 500 gallon-per-minute pump which met the "Class A" rating. The unit also had ample hose storage, compartmentation and a small water tank. This engine, although small, packed a pretty good punch and was first out on most alarms due to its size, speed and maneuverability. The unit served the city from 1955 until 1976 when the city disposed of it at auction. 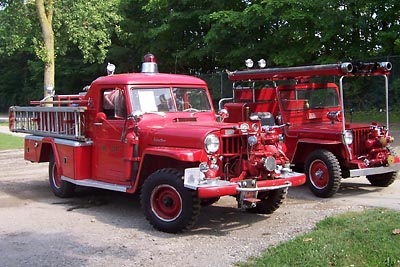 Equipment on the truck includes:

See more photos of this display at the SPAAMFAA 2004 national muster. 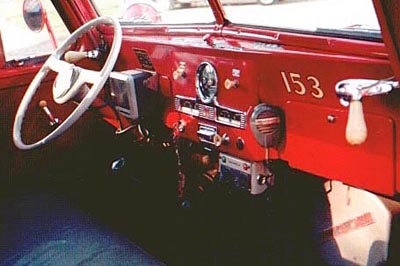 Engine 153 now belongs to Gary Dreyer, who had tried to buy it from the previous owner for 17 years. He says, "This unit held special significance to me because when I was just a small child my grandfather took me for a ride in the truck -- it was the first fire truck I ever rode in." 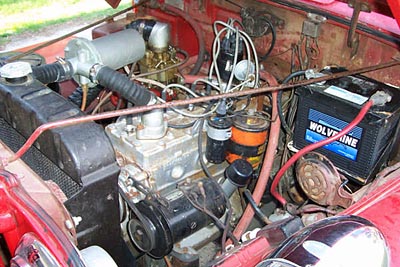 "Although the 17 years of perseverance paid off for me, it didn't do the engine in the truck any good as it needed a complete rebuild with only 5800 miles on the odometer."

See also the engine from the right side (100K JPEG). 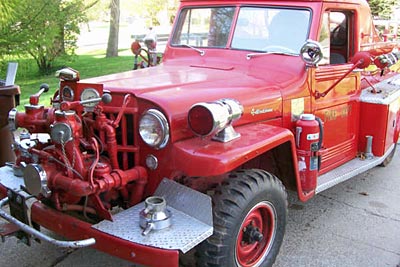 In 2006 Gary provided a tip on pump repair: "Last summer I had the pump seal go bad, the mechanical seal behind the impeller. The original manufacturer had it available for $380, then I thought about it and figured that someone must make these seals for Waterous, so I began the search and found that US Seal Manufacturing had the seal for $68. I rebuilt my pump with the new seal and had the opportunity to draft with it today. It worked superbly -- it pulled a prime through one 10' suction in seconds. I plan to rebuild the discharge seals next fall to tighten up my pump." 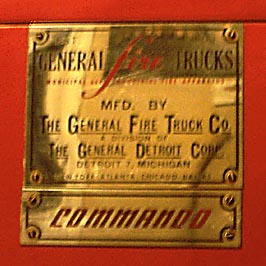 Gary says, "As I understand it, General, Howe and a few other apparatus manufacturers produced the Commandos and possibly also the smaller engines for Willys to market through their dealerships. My Commando is identical to the ones in the literature and others which I have located, in the layout, cabinetry, and equipment which was originally mounted on it."