There aren't a lot of J-series Jeep fire engine conversions around, but the ones you do run across sure are interesting. 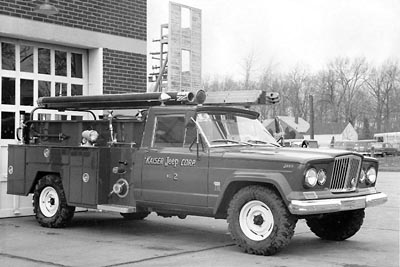 In 1964 the Kaiser Jeep factory in Toledo was already served by a CJ-3B fire engine (50K JPEG) which was small and light enough to fit into restricted areas of the plant including some elevators. This 1964 Gladiator (note the "No.2" on the door) was put into service mainly to protect the large dump area located across the street. Exactly where and when the rear body was built is unknown.

This photo shows the truck outside its station on the edge of the Jeep plant, with what appears to be training facilities for the factory fire department in the background. 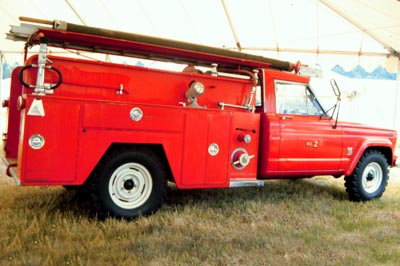 Truck No. 2 was retired when the nearby expressway was built and the dump was removed. Ron Szymanski, curator of the former Jeep House museum, saved the truck from the crusher, and it became the first vehicle in the Jeep House collection. It has been displayed at Chrysler's Camp Jeep (photo by Jim Allen, left) but its fate since the closing of the museum is unknown. 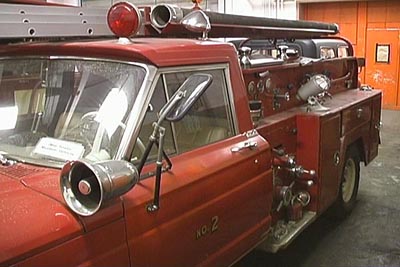 The J-series truck, with center-mounted pump, is powered by a 230 OHC 6-cylinder engine, and the odometer shows about 3,000 miles, which according to Ron actually includes "mileage" accumulated by the PTO-powered pump running, as a way of recording hours of pump use. 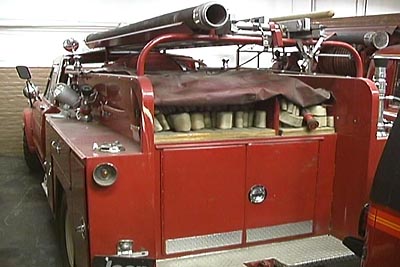 The rear compartment at this time still contained smoke-ejection fans. 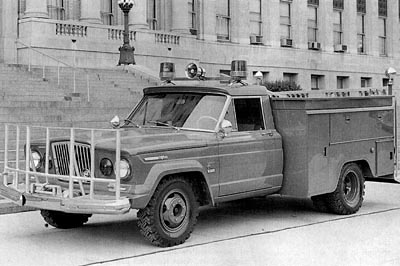 The truck in the photo at right (taken in front of the Willys-Overland Administration Building in Toledo) is identified in Jeep: The Unstoppable Legend (Arch Brown, 1994) as a paramedic truck. It did have lots of equipment storage and carried a resuscitator, but was actually a mini-pumper with dual rear wheels and a number of features designed specifically for brushfire use, including the massive front brush guard, pump controls in the cab, and bumper-mounted nozzles.

The bumper-mount nozzles are clearly visible in the larger copy of the photo (100K JPEG). It's also nice to see somebody make some real use of those two round cutouts between the headlights and the grille, filled here with red warning lights.

It was designed by Jerry Formaz, who in the 1960s worked at a large Jeep dealership eyeing a possible deal with the Detroit Fire Department. Jerry's son Bob Formaz told CJ3B.info, "This rig was built on the dealership owner's faith that my dad had the right idea and that, of course, he could actually sell at least the one that they had built. There were howls of protest from the likes of Howe and Bean (not to mention Seagrave and Pierce that the dealership repped.) The time of the mini-pumper had just begun and there was money to be made."

The City Of Walled Lake, Michigan purchased this unique truck and used it for many years as No.2, stating it could handle "99 percent of the department's calls."

See more photos and Jerry's complete story of the development of The Little Engine That Could. 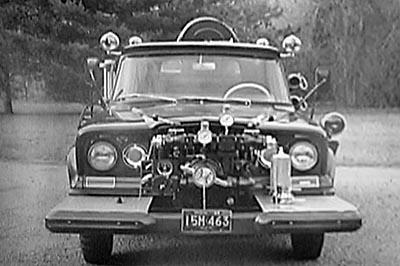 This 1960s Gladiator converted by Howe is in their traditional Jeep configuration, with a front-mounted pump. The details and the fate of this one are unknown. For a couple of other examples, see 1963 Howe Gladiator Fire Truck.

Pierre Thibault Ltd. of Pierreville, Quebec advertised their "P.T. Chief" mini-pumper, built on a pre-1970 long-wheelbase Gladiator chassis. Jerry Formaz sent this photo from their 1972 catalogue, which states "Standard and optional equipment shown. Also available with front mounted pump." I haven't seen an example of this unit in service. 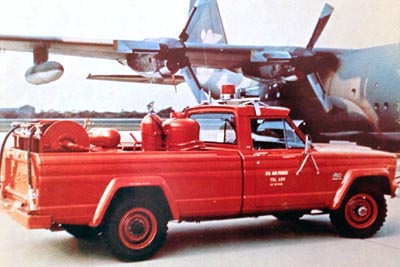 The U.S. Air Force used J-series trucks as crash tenders. I don't know the source, location or date of this photo of a J-20 which appears to be equipped with an Ansul dry chemical system. See more Gladiator crash trucks in Airfield Crash Rescue Jeeps on CJ3B.info. 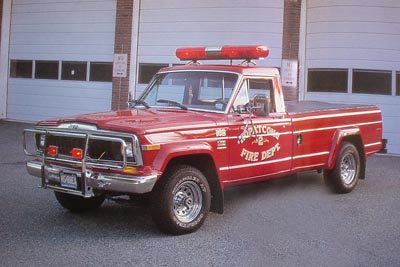 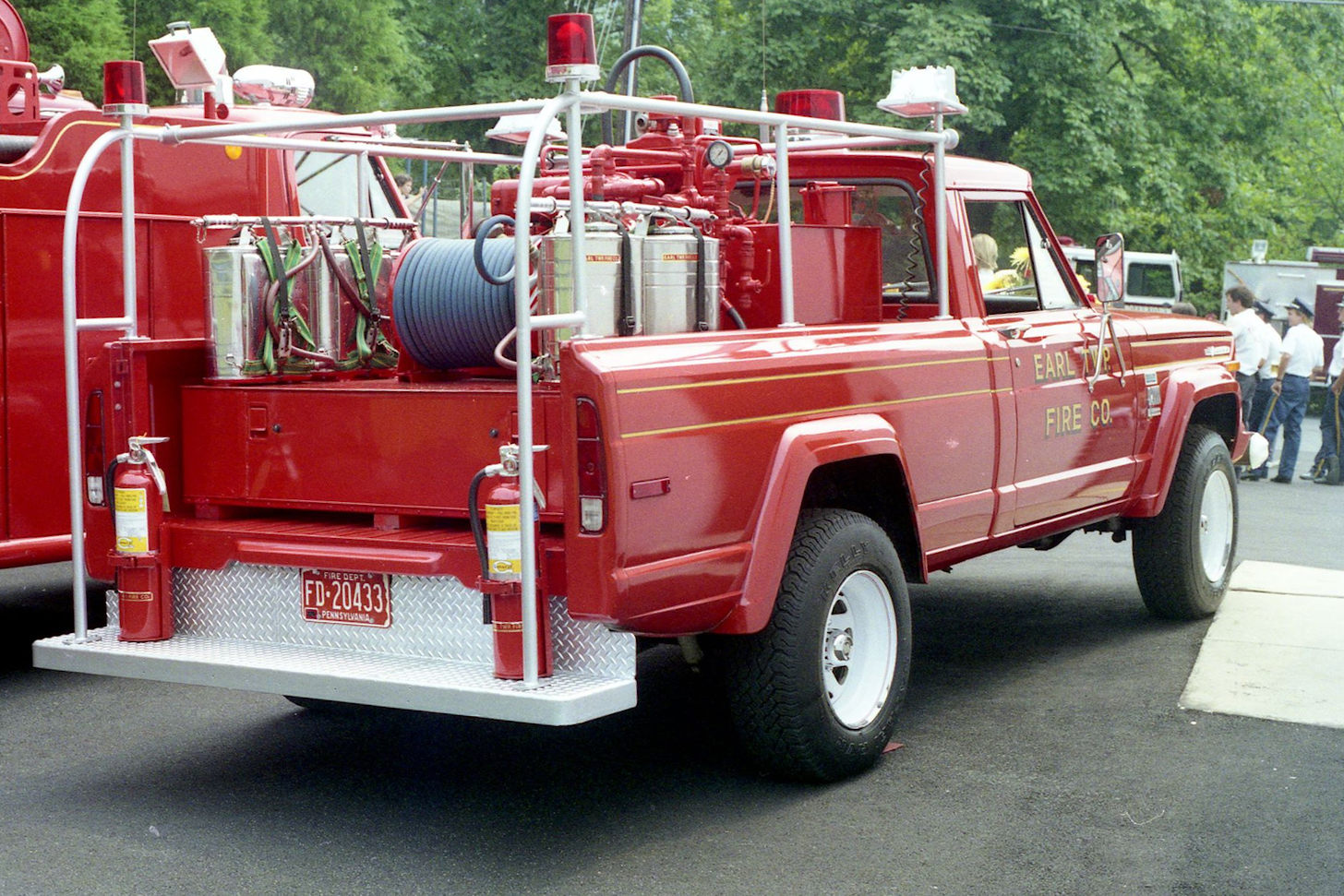 Earl Township Vol. Fire Co. No.1, in Berks County PA purchased this J4000 from an AMC/Jeep dealer in 1973 as their first brush truck, and installed an FMC skid tank and pump. They later added larger springs and tires to give it some lift, and it was their only brush unit until 1995. 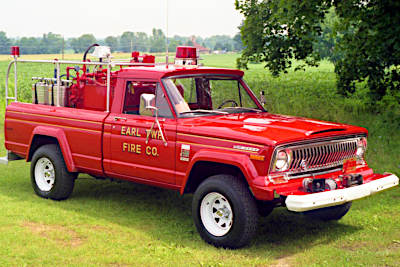 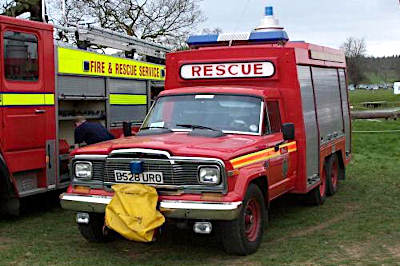 Bill Munro's book Jeep: From Bantam to Wrangler (see the CJ-3B Bookshelf) tells the story of some late 1970's 6x4 J-20 trucks (100K JPEG) originally built by AMC for Iran, but eventually purchased and converted by the East Sussex Fire Brigade in Britain.

Apparently they were successful, and this 1984 truck is another of those 6-wheel conversions, used by the Staffordshire Fire and Rescue Service as a heavy rescue unit for traffic accidents and other rescue work. See also a side view (40K JPEG). 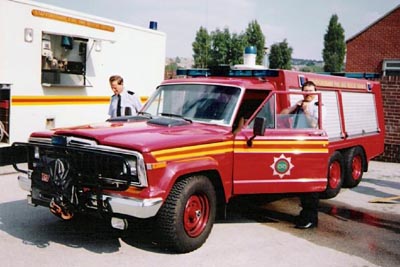 This 1989 photo of a lower-profile Staffordshire truck described as a Light Rescue Tender was posted to fire-engine-photos.com by Yelp Bullhorn. He reported that the bodywork was by John Dennis Coachbuilders, and that, "Moments after this photo was taken, she responded to an RTA on the M6 with only her sirens working, and with NO flashing lights. And the reason for this? Kids! Apparently the blue-light switch wasn't kid-proof back then! "

See also a 2009 photo (70K JPEG) by current owner Adrian Hyde, who commented: "The engine and running gear are perfect, and considering size and weight, very fast and and stops on a sixpence. I've had the vehicle for four years now and it is in very good condition. I have not modified her in any way." 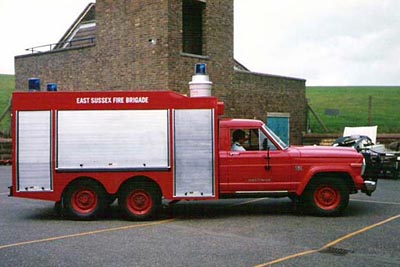 Pete Matten added this photo which is apparently one of a second batch of rescue tenders bought by East Sussex Fire Brigade, in 1983-84, from Angloco. Rick Loudon commented that he believed this truck was later used for spare parts for three other Jeeps in East Sussex, and it had a 5.3 litre V8 petrol engine. 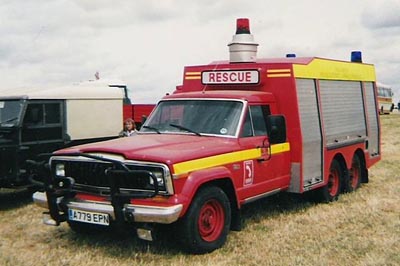 Adam Floyd posted his photo of another East Sussex Jeep. He says it is a Scothorn 6x4 conversion with Angloco bodywork. He mentioned it is now privately owned, and the picture was taken at a rally in Bloxham, Oxfordshire, in June 2002.

Thanks to fire-engine-photos.com and the contributors. 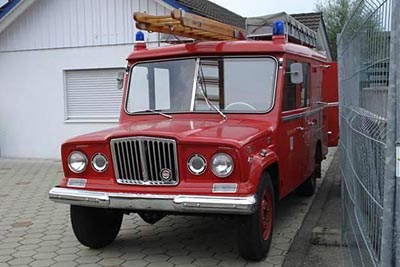 Mikel Ezcurra spotted this unusual 1969 J-3000 Gladiator conversion for sale on the web, in Switzerland. It's not surprising that the Swiss would build the same kind of deluxe enclosed equipment and personnel transporters on the Kaiser J-series platform, as they did on the Willys truck and Forward Control chassis.

See a right side view (50K JPEG). See also the dashboard, the crew compartment, the side equipment doors open, and the rear doors open (50K JPEGs). 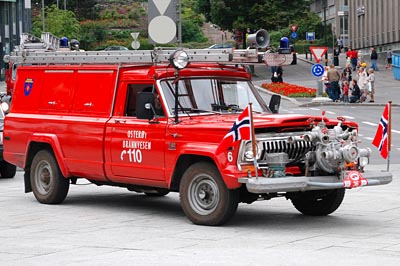 Jan Scheele took this parade photo of a 1978 AMC J-20 brannbil ("fire engine") still in service in Osterøy, Norway as of 2010. The builder was O.C. Axelsens Fabrikker a/s Flekkefjord, and the truck is equipped with a Ziegler pump and 500-liter tank. 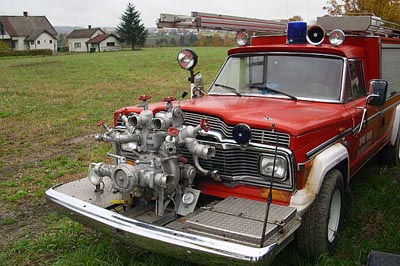 Jan recognized this similar J-20 with front-mounted pump and enclosed hose bed as being from Over-Eiker, Norway. Aleksander Andersen spotted this photo when the 1981 Jeep was sold in 2010, with 37,000 km on the odometer. See also the rear view, the cab interior, and the side compartments (70K JPEGs).

See Gladiators in use in Victoria and South Australia, in Willys Fire Trucks in Australia.

See also a J-series pickup used as a fire truck by the National Park Service in New York, and a Wagoneer rescue truck in Vietnam.

Kaiser M715 Fire Trucks are a frequent conversion of the Gladiator's military cousin.