Maheu-Labrosse in Lyon, France built fire apparatus from 1929-1989, including very successful Mercedes Unimog conversions. They also converted French Hotchkiss Jeeps into forest fire units, apparently beginning in the late 1950s. Probably M-L's most common Jeep conversion is the Camion Citerne Léger ("Light Tank Truck"), model CCFLML, based on the Hotchkiss JH-102, a version of the CJ-3B which was in production from 1960-66. 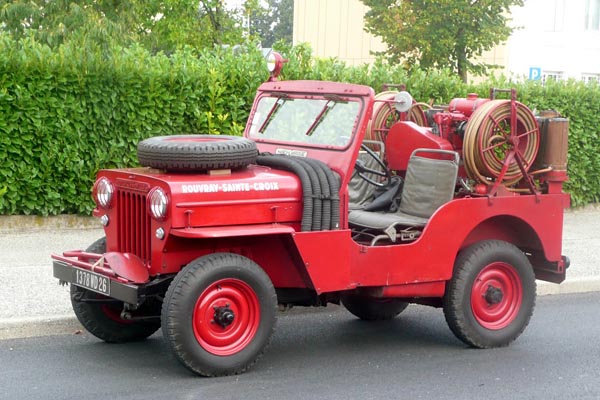 This example in Rouvray-Sainte-Croix, south of Paris, shows features typical of the model, including shovel and pick-axe mounted on the front bumper and spare tire on the hood. Suction hose is stowed over the cowl, just in front of the "Maheu-Labrosse" builder's plate on the windshield frame. The gas-powered pump supplies two booster reels.

Photo courtesy of gak69 at autotitre.com. 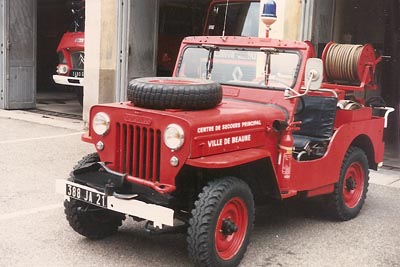 In service in Beaune, known as the wine capital of Burgundy, this JH-102 does not carry suction hose, probably reflecting a scarcity of bodies of water to draw from, in the vineyard country around Beaune. The M-L Jeeps typically had a 250 liter (65 US gal.) tank, and could also pull a tank trailer. Twin booster reels of 1/2-inch diameter hose indicate a high-pressure (low volume) pump, to make maximum use of a limited supply of water. 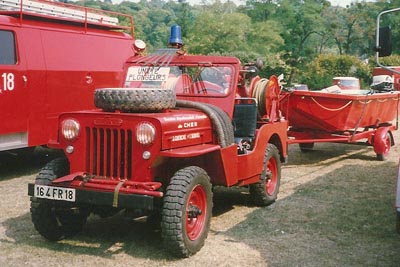 On the other hand, La Guerche-sur-l'Aubois, in Cher province, has a good deal of water in the area, including canals, two rivers and many small lakes. Apparently one of their Light Tank Trucks was seconded to pull the boat of the Unite Plongeurs ("Dive Unit"), but it still seems to be fully equipped for brushfire response.

In this photo you can clearly see the distinctive smaller size of the French-made headlights on the JH-102. Photo courtesy of chrispit1955. 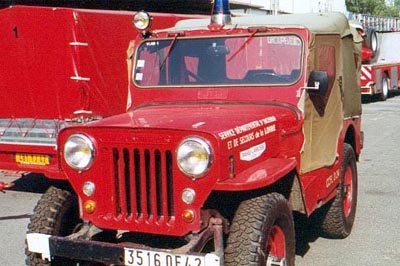 The earlier Hotchkiss model JH101 had the standard Willys headlights. This JH101 in Loire has a "Maheu-Labrosse" badge on its hood, but apparently is intended only to pull a trailer, or for command or utility use, known in the French fire service as VLTT (Véhicule Léger Tout Terrain or "light vehicle, all-terrain".)

Thanks to Pat for the photo. 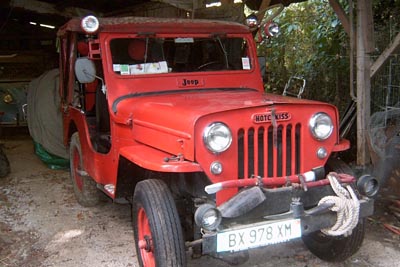 This VLTT for sale online in 2017 came with a trailer, and the cab (180K JPEG) was still filled with gear including radio, flashlight, helmets, lug wrench and road map. 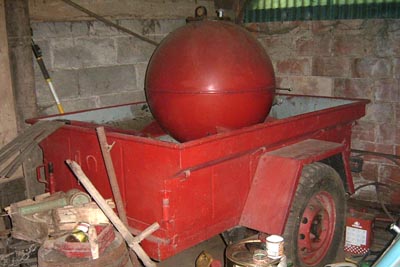 The trailer carried a large dry chemical extinguisher. I have no information on where this unit was in service. Asking price for the Jeep and trailer was 10,000 Euros. 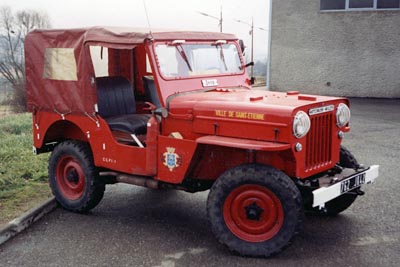 This JH-102 in Saint-Étienne, capital of the department of Loire, has had its equipment removed, including the suction hose and the spare tire. The four holes on the hood suggest that M-L used the standard Willys spare tire bracket to mount the spare there.

Photo courtesy of gak69 at autotitre.com. 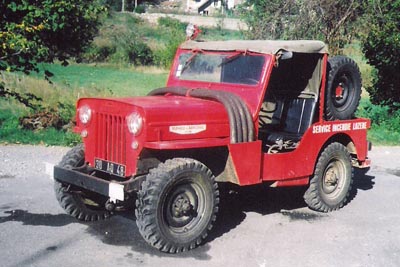 The spare tire on the hood provided maximum room for firefighting equipment in the rear, but interfered with the driver's sightlines, and it put additional strain on the somewhat fragile flatfender hood, even with reinforcement below. So M-L tried mounting the spare on the side of the tank if there was room, for example when there was a single, low-pressure booster reel. 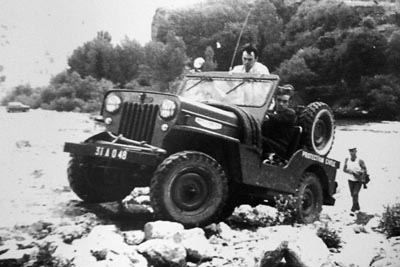 The Jeep above, and the identical one on the right, had consecutive registration plate numbers in the department of Lozère in southern France. This photo was taken beside the river Tarn in the town of Sainte-Enimie.

Thanks to gde34 at autotitre.com. 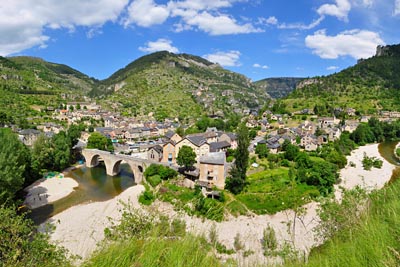 Legend says Sainte-Enimie, in the gorge of the river Tarn, was founded in the 7th century when a woman named Énimie started a convent there after being cured of leprosy in the waters nearby. It was the site of several monasteries, some of which still remain in the area, now a popular tourist destination. (Wikipedia) 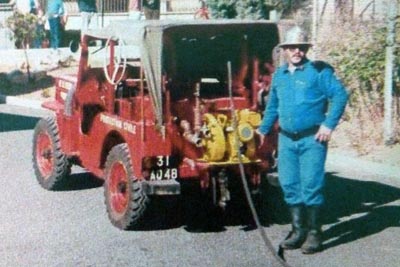 The same Jeep in Sainte-Enimie is seen in this later photo with its gas-powered pump in action. The local fire brigade obviously decided the side-mounted spare wheel was in the way, and removed it so they could extend the handle for the booster reel. 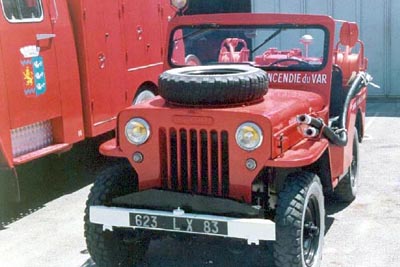 This Hotchkiss JH-102 was in service on the French Riviera, in the town of Le Lavandou. The town is within the department of Var, and the Jeep is marked Service Incendie du Var ("Fire Service of Var"). 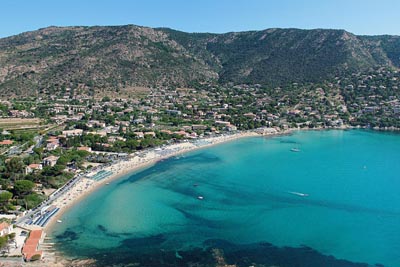 Along the Riviera (also known as the Côte d'Azur) the hills come right down to the Mediterranean, as seen in this photo of Le Lavandou. And in the older sections of the towns, the streets are often narrow, so the Jeep apparatus was useful for lots of reasons. 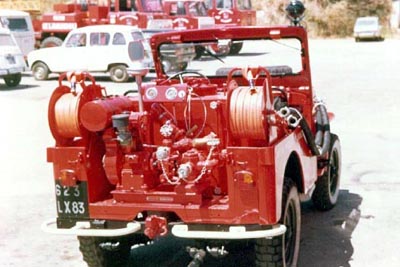 The rear view of the JH-102 in Le Lavandou reveals a slightly different configuration, with two reels of larger, low pressure hose, and unique bumperettes to protect the plumbing and pintle hitch. 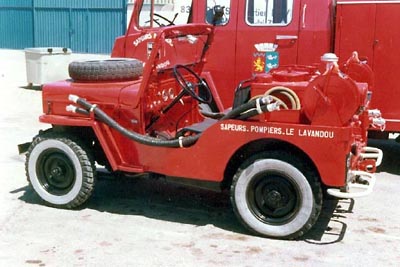 The smaller diameter of suction hose compared to what is common in North America, allows for carrying more lengths, and more flexibility in how it is stored.

Thanks to Bertrand for the photos. 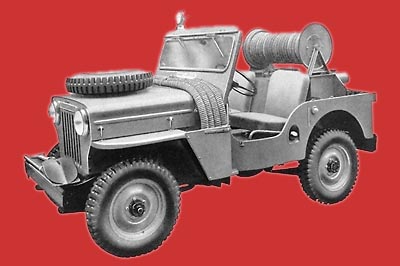 The Model CCFLML seen in a Maheu-Labrosse brochure is the low-pressure version, with one large booster reel.

According to the brochure, modifications to the Jeep up front include: "Lighting by a Scintilla vertical generator. Long-range directional spotlight. Addition of a two-tone horn. Bumper rack for pioneer tools including shovel and pick-axe. Reinforcement of the hood to hold the spare tire. Supports and straps for four lengths of suction hose in front of the windshield." 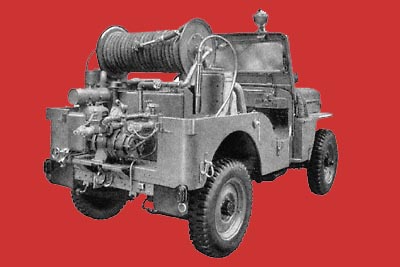 A single-cylinder two-stroke engine, rather than a PTO from the Jeep, was used to power the centrifugal pump. The hot-galvanized steel tank had a 250 liter capacity, and the attack hose reel carried 80 meters of hose in 20-meter interconnected lengths, with fog nozzle.

The Jeep was equipped with 6.50x16 "Track-Gripp" tires, and the right side had brackets for two fire brooms. 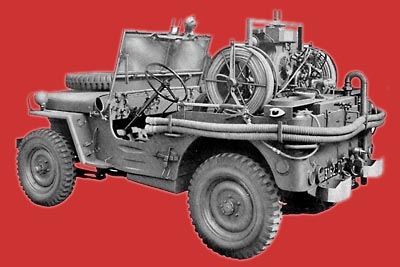 The brochure also includes a very aggressive-looking brushfire attack Jeep based on the Hotchkiss M201 version of the Willys MB, with high-pressure, low-volume water system.

In French, the high-pressure equipment is described as follows: 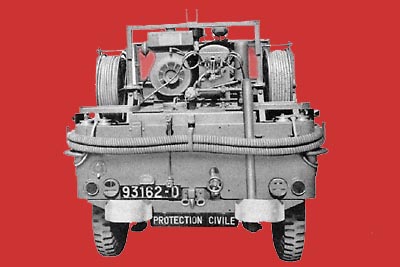 "With the aim of using the 250 liters of water with maximum effectiveness, hydraulic equipment creates high pressure at a reduced rate of flow: 2 cubic meters/hour under a pressure of 40 kg/square cm. The advantages of water used at high pressure are well-known, and its application to forest firefighting is particularly appropriate, because each liter of water has maximum effectiveness: 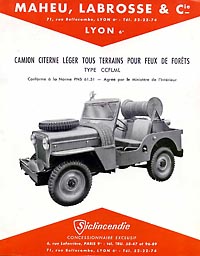 See the full pages of the brochure (120K JPEGs), with complete text in French. 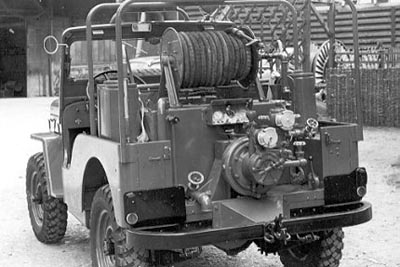 Pumps powered by a small gasoline engine seem to have been the most popular conversion. But this model CCILML, built by M-L from 1962-66, powered a low-pressure, high volume pump from the Jeep's rear PTO. Photo courtesy vehicules-incendie. 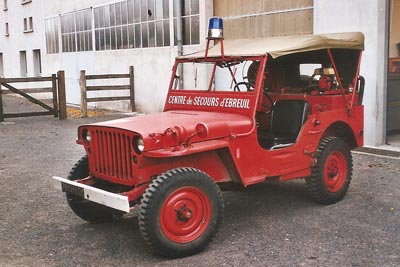 This M201 with its gas-powered pump in the rear, photographed in the village of Ébreuil in central France, may be a later M-L conversion since it doesn't carry the spare on the hood. Although the M201 was a clone of the Willys MB, it actually stayed in production until 1967, longer than the CJ-3B-based JH-102. 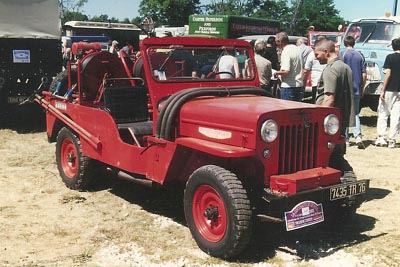 I sometimes wonder why American firms such as Howe didn't do many fire apparatus conversions using long-wheelbase Jeeps, which would provide more equipment room. Here's an example; M-L made use of a Hotchkiss HWL (1963-66) for this conversion, which appears to be a high-pressure system. Photo courtesy chrispit1955. 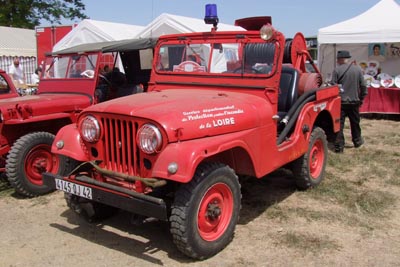 Even this late CJ-5 got the M-L treatment, for use in the Loire Valley. The text on the hood reads, "State fire protection service of Loire." It now belongs to the Musée des Sapeurs-Pompiers de la Loire in Firminy. Photo courtesy of chrispit1955. 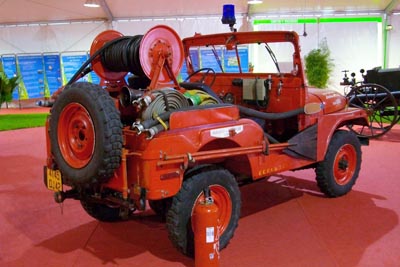 Here's the same Jeep seen in a Museum display. It's carrying a couple of brooms for brushfires, in addition to the tools on the front bumper. The stencil on the side identifies this model as CCFLD. 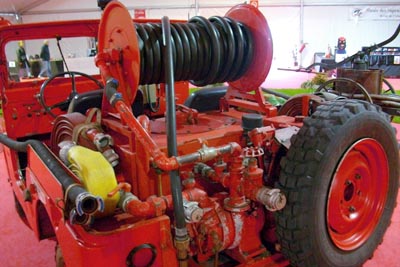 The CJ-5 carries a good deal of large-diameter supply hose, in addtion to the four lengths of hard suction hose on board. M-L has settled on a swing-away tire carrier to allow access to the pump motor. Photos courtesy gde34 at autotitre.com. 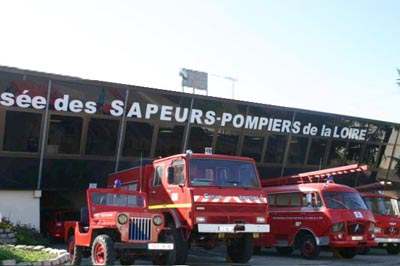 The Museum has some 150 vehicles in its collection, including at least one other Jeep. Their JH-102 VLTT is given pride of place in this photo, courtesy of the Museum. 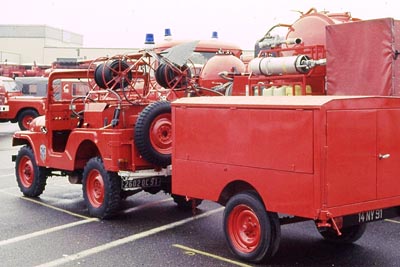 Another CJ-5 with a completely different setup, built for the Brigade des sapeurs-pompiers de Paris. The BSPP is actually a French Army unit which serves as the primary fire and rescue service for Paris and certain sites of national strategic importance. (Wikipedia)

It's pulling what looks like possibly a pump trailer. 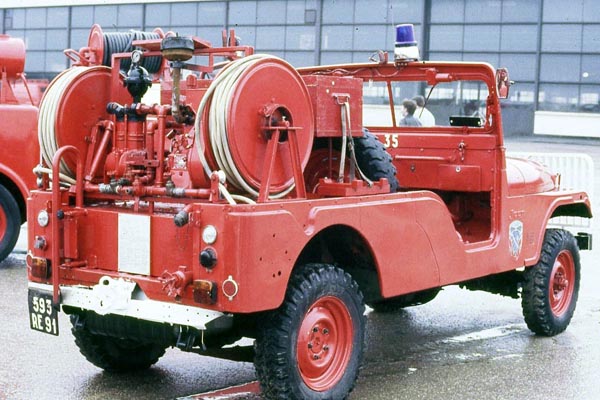 This CJ-6 also belonged to the BSPP, and demonstrates what can be done with the space in the back of a longer Jeep. The pump is sitting on top of what appears to be quite a large water tank. They have found one more place to try placing the spare tire -- behind the passenger seat.

Thanks to Sandrin2 for the Paris photos.


Thanks to J-C Guerry for scanning the brochure, and thanks to the many photographers. I wouldn't be surprised if there are still some Hotchkiss Jeeps in service in 2017; photos are welcome. -- Derek Redmond

See Hotchkiss Jeeps as chief's cars in CJ-3B Fire Jeeps Around the World.