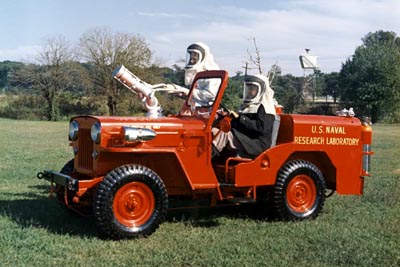 This CJ-3B modified by the U.S. Naval Research Laboratory in Washington DC, appears to be the second prototype of a chemical foam crash truck first demonstrated by the Navy in 1952 for use on aircraft carriers. At the time of that original demonstration of what the Navy called "Little Squirt," a press release suggested that the modified World War II jeep could also be marketed to civilian airports. This new version built on a brand new CJ-3B chassis may have been an effort at promoting civilian sales, or simply a step towards a production vehicle for use on carriers. The undated photo is courtesy of Fire Trucks at War. 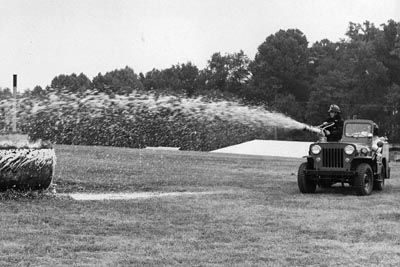 A second photo located by Fire Trucks at War shows the same Jeep, training its foam gun on a flammable liguid fire set in an open steel tank. The fact that the operator is in standard turnout gear rather than the asbestos fireproof suits seen in other photos, suggests that this may indeed be a demonstration aimed at the civilian market. 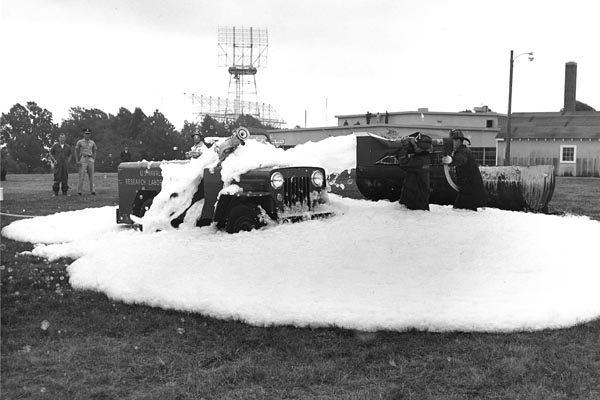 In another exercise, firefighters attempted to cover the new Little Squirt with foam, possibly to demonstrate that it would continue pumping under those conditions. 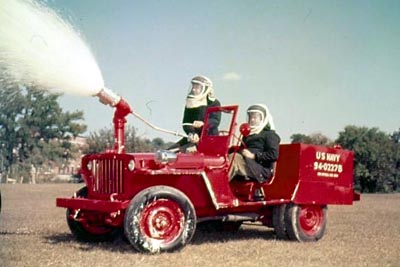 The original "Little Squirt" was a war surplus Willys MB which had been given dual rear wheels and reinforced frame to help support a 230-gallon water tank (plus 20 gallons of foam "soup".) In this Navy photo taken at the Naval Research Laboratory demonstration in October 1952, it appears that the frame may still be under some stress from the weight in the rear. 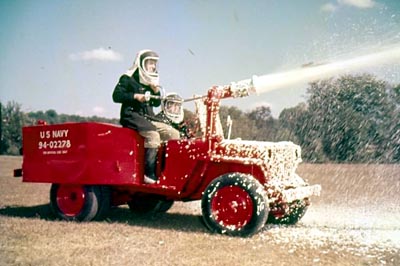 Using the water and the foam concentrate in its tank, and a pump driven by its power-take-off, the jeep could mix and deliver 1,300 gallons of foam per minute, for two minutes, producing a wide or concentrated stream up to 90 feet away. It could also connect to an external foam supply. The pump required high RPM's from the PTO, so the jeep could not be driven while pumping foam.

See also a front view (60K JPEG) with the gun in action. 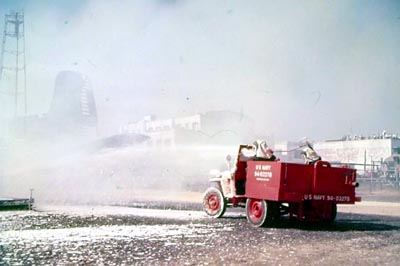 The impressive 1952 demonstration involved 150 gallons of gasoline set on fire around a (presumably surplus) aircraft. This great Navy photo shows the jeep hitting the tail section with its foam stream. 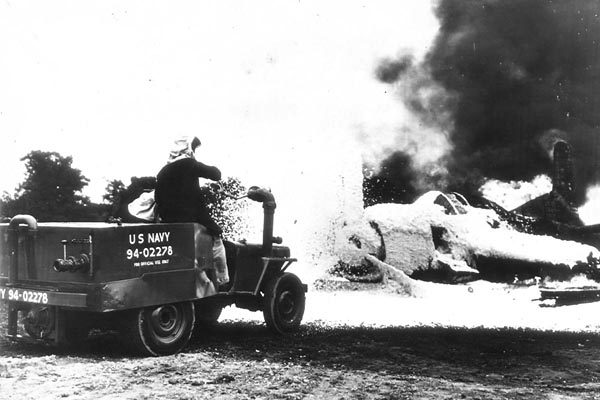 Photographer Ed Walston of the International News Photo agency was in the crowd and captured a dramatic photo. 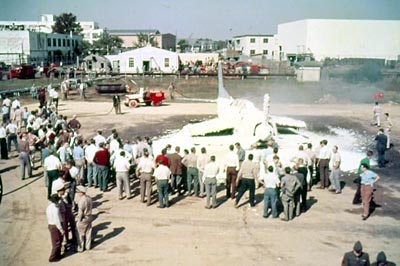 The crowd surveying the smothered blaze appears to be largely civilian rather than military personnel. It's likely there was good representation from both the press and the fire apparatus industry. The Navy's press release suggested there was interest from automakers in producing a civiilian version with a possible price tag of $5,000. 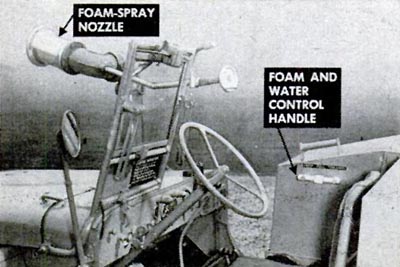 One of the publications which gave good coverage to the Navy's demonstration was Popular Science, which ran an article called "Navy Soup Guns Fight Plane Fires" in its March 1953 issue (see the cover, 130K JPEG). The title refers to the foam concentrate, which according to the article, "looks like black-bean soup, has a foul smell and is sometimes made from soy beans."

The article describes both "Little Squirt" and "Big Squirt" (90K JPEG) which was built on a truck chassis and carried two foam guns powered by twin 140hp engines, capable of producing 7,000 GPM of foam. 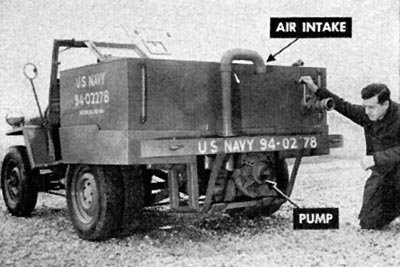 Page 146 of the article (180K JPEG) gives a good look at the controls on the jeep (above), and the rear-mounted pump hanging below the tank (right). The significant new feature of the Navy's design was that air was mixed into the foam not at the nozzle, but in the pump itself, producing "micro-bubbled" foam that would stick to vertical surfaces.

See the complete article from Popular Science, at Google Books.

Any new information on what happened with the CJ-3B version of "Little Squirt" is welcomed.

Thanks to Federico Cavedo for finding the Popular Science article and the 1952 photos scanned at the National Archives by Historylink101.com. Thanks to Fire Trucks at War for finding the CJ-3B photos. -- Derek Redmond