Fire Island, off the eastern shore of Long Island, New York, could have been named "Fire Jeep Island." The Willys Jeeps used by fire departments in a string of small communities along the island were a well-kept secret but have become better known as they have been retired and sold as surplus.

One of those departments was the Saltaire Volunteer Fire Company, which like the others has been upgrading its equipment in recent years. In 1986 the SVFC was the first fire department to provide an ambulance and Emergency Medical Services on Fire Island. 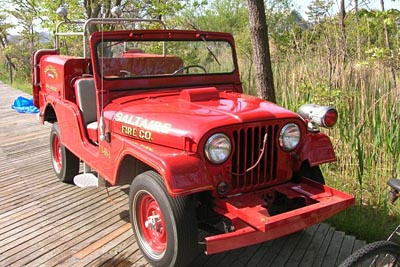 This 1960 Willys CJ-6 was purchased new by the Saltaire Volunteer Fire Company in 1960. When auctioned in 2007, the description stated: "It has 1,645 original miles, all very light use. It has been used almost exclusively as a parade vehicle for more 20 years, and has been recently restored. The engine and body are in excellent condition. It is only being sold because we have run out of space in the firehouse."

The Howe Fire Apparatus conversion had the typical Howe hood cutout, but no longer had its front-mounted pump when sold; see a closer view of the pump platform (110K JPEG). It also lacked the front supports for the overhead hose and ladder rack. See a Howe factory photo (50K JPEG) of a CJ-6 fire engine, which surprisingly was less common than the shorter CJ-5. 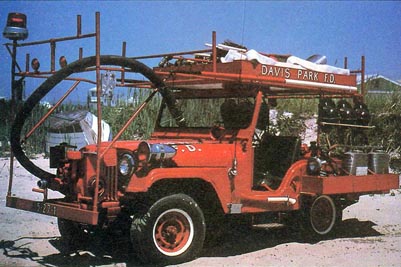 How much equipment can you carry on a CJ-5? This shorter Jeep was possibly the only piece of apparatus for neighboring Davis Park Fire Department when the photo was taken in 1984, so it was equipped with a bit of everything including helmets for the volunteers. Clearly brushfires were a concern, as there are backpack tanks in the equipment boxes hung off the sides of the Jeep, and brooms and shovels in the overhead box. Looks like a gas-powered pump on the front, with suction hose pre-attached although there's room for hose and ladders on the overhead rack.

The Davis Park photo is by Robert Vaccaro, from his article in the August 1984 issue of Firehouse magazine. Thanks also to Mario at Saltaire VFC. -- Derek Redmond