The Hardtops of Attu Island

In June of 1942 the Japanese occupied Attu island, the furthest west of the Aleutian Islands of Alaska. It was a small island with only 45 Aleuts and an American school teacher and her husband living there, but it was of great strategic importance. One of the bloodiest battles of the Pacific theater (and the only land battle of World War II fought on North American soil) occurred when the Americans regained the island in 1943. 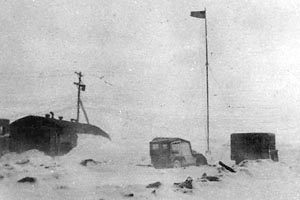 Many vehicles on Attu were apparently rejects from other theaters of operation. As open jeeps they were almost useless in the cold and stormy climate, so hard tops were designed and manufactured from plywood and scrap materials on Attu island itself. During a williwaw -- an Aleutian Island storm -- winds can reach 140 MPH with horizontal rain, sleet and snow all at the same time. In a record storm the wind gauge broke at 190 MPH. See a larger copy (60K JPEG) of this photo of the base during a williwaw, courtesy of Rene Thibault. 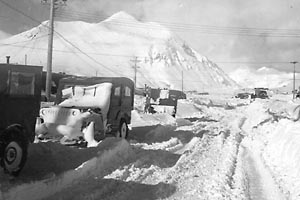 George Villasenor, a teenaged Naval Aerial Photographer, was assigned to Attu Island. This photo taken by George after another williwaw, shows what appears to be the same jeep as in the photo above. See also a closer view (60K JPEG) of the three jeeps.

Inidividual jeeps can be identified because these tops were not simply a series of identical covers, but seem to have been "custom designed" using available materials. Some were simple, others were surprisingly sophisticated, but all were interesting as experiments in hard top design and construction. 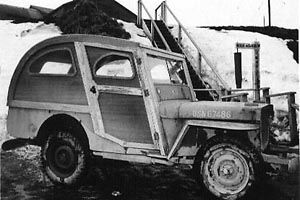 As the war ground down, much of the command was taken off the island, leaving their jeeps behind. George managed to commandeer the best jeep on the island and used it as his private jeep for the duration of the war.

Built on an extended tub and made entirely of plywood on a wood frame, the top shows imagination and a sense of design not often seen on hard tops. George remembers that the windows did not open but they probably didn't need to in the Aleutian climate. They appear to be Plexiglas cut to repeat the curve of the roof and rear. The door is almost theatrical in its raking diagonal, but it looks as if it would work quite well. Like many early hardtop doors, it hinges on the angle of the windshield. 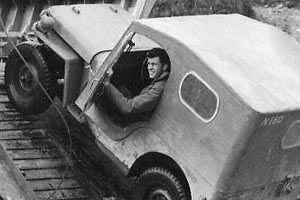 Another interesting top, this one having rounded rear corners and curved door openings, approaches design problems with the same care as on George's top. While not flashy, it shows more originality and care of design than many low and medium-priced commercial civilian tops. The rear windows may have been salvaged from a scrapped airplane. 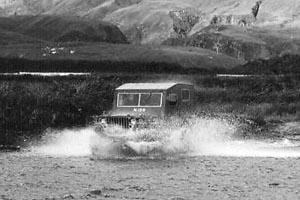 Even an Attu Island jeep needs a bath now and then. 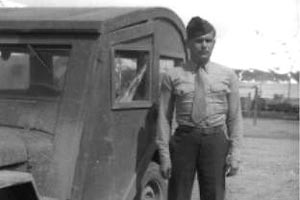 The next three photos are from the collection of Rene Thibault. Here we can see how most of the tops dealt with the tapering between the fender and driver opening. The footprint of the top is a rectangle, with spacers inserted between windshield frame and the door post. On this top these spacers increase the blind spots by at least 5 inches on both sides, not acceptable on city streets but probably acceptable on a small low-population and low-traffic base. The extreme width of this top may suggest more insulation in the doors. This explains why Willys-Overland later used a specially designed wider windshield on their own civilian half top. The door hinges appear to be cheap household hinges. 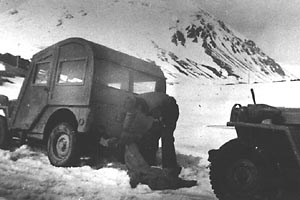 Here the same jeep is stuck in snow, and an MP has arrived to help pull it out. This rear view shows that the designer seems to have been interested in increasing rear visibility and allowing more light into the cab. The roof and rear demonstrate the versatility of plywood. 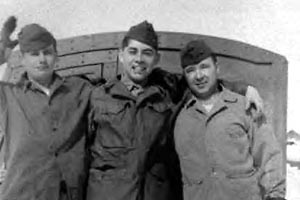 Three soldiers pose in front of their Attu hard topped jeep in 1946. On this top a little more care is given to the design and construction of the door with the gentle curves above the window. Although we can only see a portion of the top it is clear that it is another individually designed and carefully crafted plywood top. The arched top and door top edge suggest that the builder was not interested in "manufacturing" but in creating attractive and unique tops. The photo is courtesy of Rene Thibault. 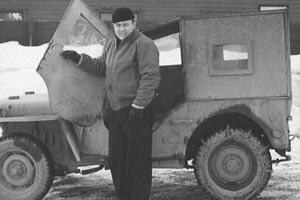 Even this most elementary of tops seems to be an exercise in simple efficiency. Of note is that each of the jeeps shown have tops with individually designed and shaped windows. We also see how the door hinged to the windshield can sometimes rest open above or on the fender. This was a very common solution to early hard top doors, but by the fifties the idea was abandoned, most likely for safety reasons.

All of the jeep tops shown were designed with individuality. Perhaps the base carpenter designed and supervised their construction. The simplest of tops would have been adequate, but their creators apparently looked at it as a challenge and designed them with creativity and enthusiasm. This is one of those cases where one asks "Why did they do that?" The answer may be in the weather: 50 inches of rain annually, only a few clear days of sunshine per year, wind so strong and constant even a tree can't survive. In that situation one finds reasons to stay indoors and if one can't find a reason he makes a reason. Of course we'll never know, but it is a delight to see this burst of creativity and craftsmanship in such an unexpected place.

Legend has it that after the war the heavy equipment was too costly to remove, so jeeps and other machinery were buried still running in a bulldozed trench. Maybe true, maybe not, but certainly the makings of another jeep myth. -- Bart McNeil

Return to the Table of Contents.

Many thanks to George Villasenor and Rene Thibault for searching their archives for jeep photos and their memories of Attu Island. Thanks also to George Smith, webmaster of the Attu Island Homepage, a very interesting chronicle of one of the major WWII Pacific theater battles. More of George and Rene's photos and comments can be seen there. Thanks also to Bart, and to Mike Winchester who brought the Attu Island jeeps to our attention. -- Derek Redmond

See also a brief history of Attu island in WWII.