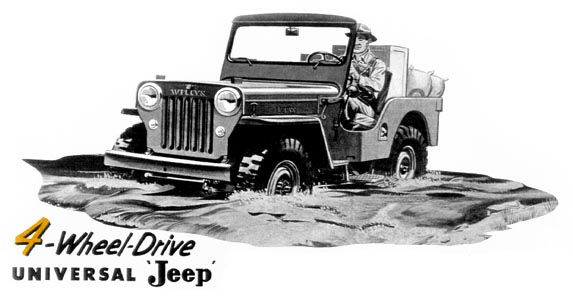 Here are two brochures for the Willys line of 4-Wheel Drive vehicles, from Steve Chabot's collection. Apparently issued in 1953 and 1954, they're interesting because they both feature illustrations of the CJ-3B Universal Jeep which were probably never seen again. These pictures, apparently ink drawings, are both in the style I have discussed at some length before (see the Vehicle of Ten Thousand Abilities postcard). The proportions are not right for the CJ-3B: the hood is not high enough. Perhaps Willys was still trying to sell off the last of the CJ-3As. Perhaps at the time these were done, the artists had not even seen a CJ-3B.

Neither of these brochures mentions the CJ-3B model number. At the time, it was simply the only "Universal Jeep". Both brochures also refer to it as the "go-anywhere vehicle" on the little posters showing Willys' four principal 4-wheel drive vehicles. The posters are revealed when the 11x17-inch sheet, folded in quarters, is fully unfolded.

The green brochure, publication KW-1705, is marked "Litho in USA, 1953," and its illustrations of the Willys wagon and truck confirm this -- they have the five horizontal bars on the grilles, which were reduced to three in 1954. 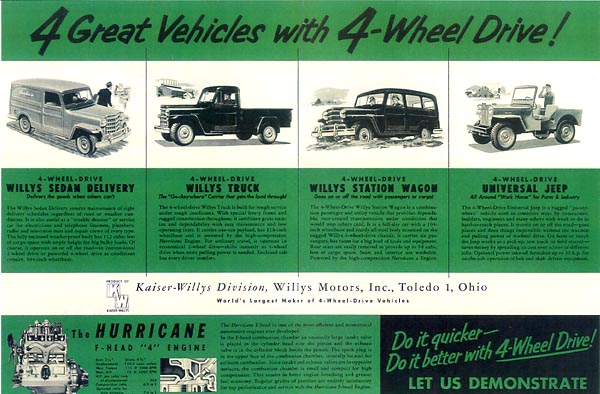 The caption below the CJ-3B here is "All Around Work Horse for Farm & Industry." The illustration shows it on a farm -- it's clearly a slight reworking of the full-colour CJ-3A in a 1952 Willys ad (40K JPEG). (That 3A was also the inspiration for the postcard illustration mentioned above, and the 1952 ad itself is interesting as a rare example of an ad featuring both civilian and military Jeeps.)

The year 1953 was the first model year for the CJ-3B, and also the year that the Kaiser Corp. bought Willys-Overland. These brochures show the "K-W" Kaiser-Willys logo, which was not extensively used. Most published materials soon returned to using simply the Willys Motors name, until Kaiser began using "Jeep" as the principal brand name, in the 1960s.

The opposite side of the brochure (70K JPEG), which forms the outside when folded, is almost identical on both brochures, except for the colour. The quarter which forms the front cover, has the same illustration in both cases, of the front of a 1954 Willys wagon. The title on the green version is simply "4-Wheel-Drive Willys Vehicles", whereas on the yellow 1954 version it has been changed to "They Go Through When Others Can't."

There is also a diagram and brief explanation of 4-wheel drive, and a lengthy list of occupations that could make use of off-road transportation, from "civil engineer" to "lease runner"(?) to "sheep herder".

The yellow brochure, publication KW-1763, does not have a date printed on it, but the 3-bar grilles on the wagon and truck probably place it in 1954, the last year for the CJ-3B as the only Universal Jeep. 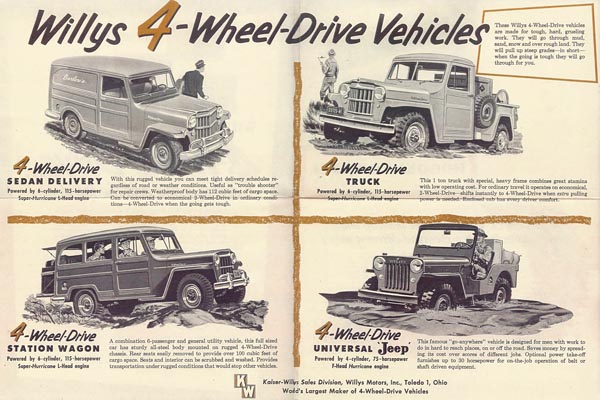 The sedan delivery, pickup truck, and station wagon, are again shown taking roles in delivery, industry, and rural transportation for city slickers. The CJ-3B is again at work on the farm, which ties in with the fairly extensive advertising in farm magazines done by Willys in this period.

The farm illustration was modified in the 1955 version of the brochure (KW-1765) to represent the new CJ-5!

Thanks to Steve Chabot for sending the brochures. -- Derek Redmond

Last updated 21 May 2017 by Derek Redmond redmond@cj3b.info
https://cj3b.info/Literature/BrochureKW1705.html
All content not credited and previously copyright, is copyright Derek Redmond