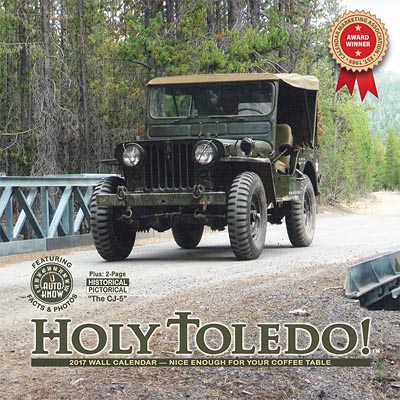 The Holy Toledo! calendar from the Norris-Banonis Group is back for 2017, and you can still order one before Christmas. Hard to believe that this year there will be only 3 months out of 12 that feature a Jeep from the CJ-3B era (1953-68), but if your interest in Jeeps extends earlier or later you will find plenty of interesting photos and reading.

The cover photo is an amazingly original M38 (January) owned by Lloyd White. The other military month is December, featuring a 1944 MB and a Flying Fortress bomber. At the more recent end of the age range during the year, are a beautiful 1971 Commando and a 1972 Renegade. 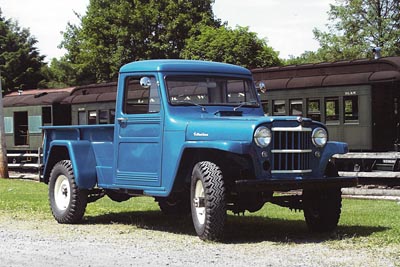 An October sidebar about the Tornado 6 engine introduced in 1962, points out something I didn't know, that the new engine actually was used first in the old Willys pickup and wagon, before the 1963 Gladiators and Wagoneers started coming down the line.

And speaking of Gladiators, there is a nice one for November. 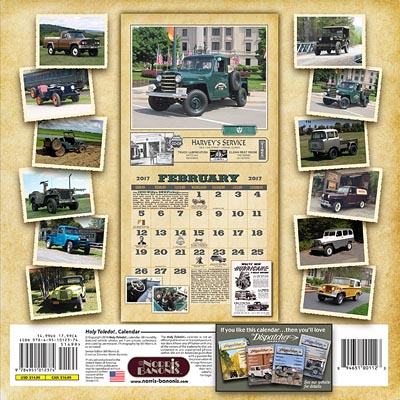 One little feature that keeps this calendar entertaining all year is the inclusion of significant dates in Jeep history throughout the year. Pretty much every week has one or two anniversaries noted.

One oddity is that both 21 July and 15 October are marked "Jeepster VJ unveiled to the public," and I would have been confused if I hadn't read the article about Walter Appel (Chief Engineer at Willys in 1947) in the Fall 2016 issue of The Dispatcher, describing how he was instructed to get a prototype VJ-1 ready for public viewing on "Institution Day" in October 1947, long before the production model was introduced.

The bonus two-page pictorial essay at the end of the calendar this year cover the 29-year history of the CJ-5, the only Jeep to have been produced by all three of Willys, Kaiser and American Motors.

Holy Toledo! is the only calendar being published by Norris-Banonis this year. It can be ordered online or by mail. The price is $14.99 each, plus $6 shipping in the US. -- Derek Redmond


See the most recent year and previous editions of the calendar reviewed on CJ3B.info.