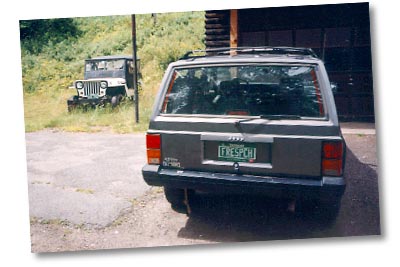 Northern New England is Jeep territory, and as we drove across Vermont and New Hampshire in the summer of 1999, we saw a lot of them. The large number of Cherokees and Wranglers on the highway seemed to be matched by the number of flat-fenders on the back roads. My wife and daughter helped me spot them, in various states of repair ranging from heaps of rust, to hard-working snowplows, to built-up off-roaders. 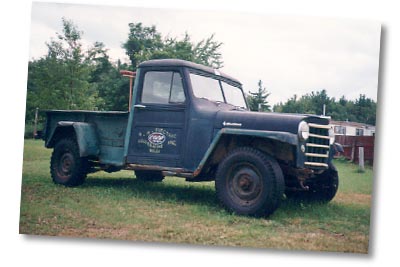 Almost the first thing we saw after crossing into the state of Maine, was a 1952 Willys pickup for sale beside the road in Gilead. Still wearing its original paint and logo from the New Hampshire Electrical Co-op, this Jeep showed 70,000 miles, and the F-head started right up. The owner "Red" was asking $3,000. I bought a Tonka from Red, Jr. for $2. 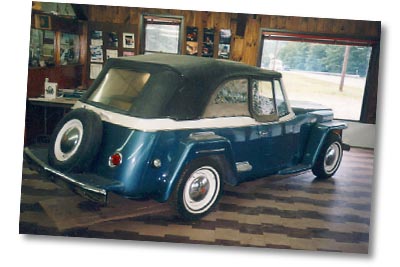 A little further down the road, we spotted a '48 Jeepster on display in the showroom of Morrison Motors in Rumford, Maine. It's not for sale; this beauty had been owned since the early 50's by Brad Morrison, who said he had to do a bit of restoration as a result of his youthful over-exuberance. He rebuilt the rear of the body with Lincoln taillights. Brad also showed us a red CJ-3A being restored out back in the shop. We've since learned that Brad has died and his daughter Karen is hoping to put the Jeepster back on the road. 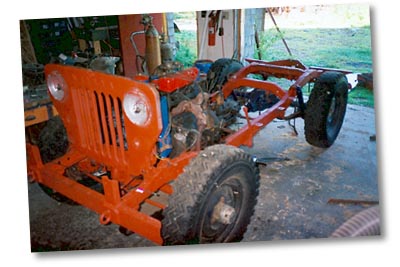 Near Skowhegan we stopped at Alan Haley's place to see his CJ-3B project. He had his eyes open for a good used body tub, as he worked on the 1958 chassis and drivetrain in his well-equipped garage. We found Al putting in brake lines, and thinking about how to re-install a vacuum-powered brake booster which had been attached to the inside of the left front fender. It was tubed in between the master cylinder and the brakes, running off the vacuum of the engine to give more braking power with less pedal pressure. See a larger copy of the photo (100K JPEG.) 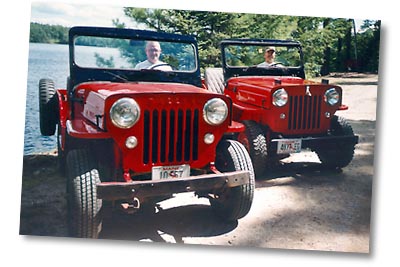 While camping at Al's, we drove down to see Ron Murray and Steve Chabot and their Jeeps. They were waiting for us at Ron's place, and were disappointed we didn't show up in my 3B. But I'm almost glad we didn't, because it would have been put to shame by Ron's freshly painted 1955, and Steve's 1959 CJ-3B which was one of the best-preserved examples of original paint I've seen. To see the two Jeeps side-by-side in President's Red, and compare the differences between the early and late CJ-3B, was a rare opportunity. See a larger copy of the photo (65K JPEG.) 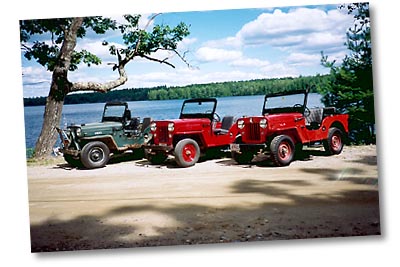 When Ron's green 1953 joined the lakeside lineup, it was like going back in time 40 years. See a larger copy of this beautiful photo (100K JPEG.)

From the Haley homestead we headed to the ocean, to spend a few days enjoying the beaches and the coastal forests. Then we had to zip home in a day, so we didn't have a lot of time for Jeep spotting on the way back; there are a bunch of CJ-3B owners in southern New England we'll try to connect with on a future trip. -- Derek Redmond