Did the U.S. military order any CJ-3Bs with 24-volt electrical systems? Would anyone else go to the trouble of converting a 3B to 24-volt? These are a couple of questions raised by a 1953 CJ-3B bought recently by military vehicle collector Dennis Goins in Nashville, Tennessee.

Mike Reinhardt suggested in 2006: "This 24-volt CJ3B may be an old Air Force line Jeep. If the color under all those layers of paint is dark blue you may have a Jeep the Air Force used on the flight line to jump start aircraft, hence the modification to 24-volt." 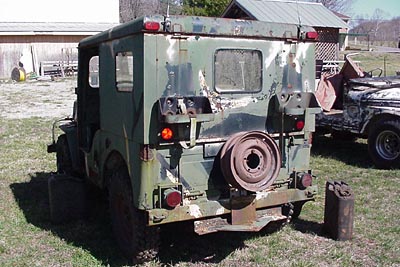 Dennis mentions some of the other details on the Jeep: "It seems to have some US Civil Defense blue paint on it, so I really think it came down from the military. Notice the taillights -- they are military, aren't they? It had four jerry cans in it dated 45,52,53 and 68. The two can racks on the back appear military too."

The possible Civil Defense connection raises the possibility that CD authorities might have made some modifications to the Jeep, including the electrical system. That might explain some of the military-style details such as the jerry can racks and taillights, which are not consistent with other Navy or Army CJ-3Bs or M606s. (See M606 Military Jeep Specifications.) 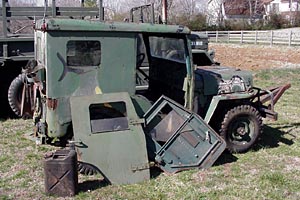 "The Jeep has a hard top with doors. I think it is a factory hard top simply because it looks too good not to be," comments Dennis.

See photos of the interior of the hardtop (35K JPEG) and the engine compartment (70K JPEG).
Eric Lawson had these comments:

"The hard top looks like a Koening Iron Works top.

"It is possible a 24-volt equipped engine (from an M38A1) was stuck into the Jeep. If that were the case, then changing out the headlights and tail lights would all that would be needed to convert the Jeep to 24 volts. This might have been viewed as being simpler than converting the stuff on the engine to a 12 volt system.

"If I recall correctly, the military 24-volt engines had generators, water pumps and crankshaft pulleys set up to use two narrow belts rather than a single wide belt. I don't thing the military generator pulley would fit on any of the 12-volt generators, so the crankshaft pulley and water pump would need to get changed out to ones set up for the wider belt. Otherwise a narrow belt would need to be used and this probably wouldn't work so well.

"The 12 volt system's stuff could connect to the positive terminal of battery A. Any 24-volt stuff would connect to the positive terminal of battery B. This arrangement is not the best for a long life for battery B. The more power the 12-volt system demands, the more unbalanced the battery life would become. Battery B would also need to have water added much more often than battery A. Something similar could be done for a Jeep being converted from 6 to 12 volts, but for the reasons above, I wouldn't do it. The military 24-volt systems can use two 12-volt batteries in series and have normal battery life because there is no 12-volt load to cause the "imbalance" problems.

"Since the Jeep is now rewired it most likely would not be possible to tell if my theory is correct." -- Eric 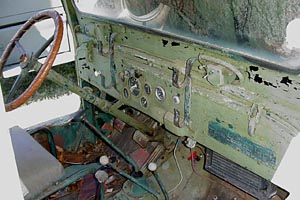 The dashboard shows evidence of a variety of modifications including additional switches and gauges, electric wiper motor on the driver's side, and the gun racks likely added by a hunter. There is no sign of any military data plates -- just the normal Willys dash plate.

Thanks to Dennis for the photos and information. -- Derek Redmond