Elvis Presley liked pink Surrey Jeeps enough to buy one for his Graceland estate. But he did not go to Acapulco, Mexico for the shooting of his 1963 film Fun in Acapulco, so he never saw the famous pink and white Jeeps of the Las Brisas resort, except on the rear projection screen behind him on a Paramount stage in Hollywood (right). In this shot Elvis rides a stationary bicycle as he sings "Mexico." The song was a big hit around the world, although "Bossa Nova Baby" was the North American hit song from the film. 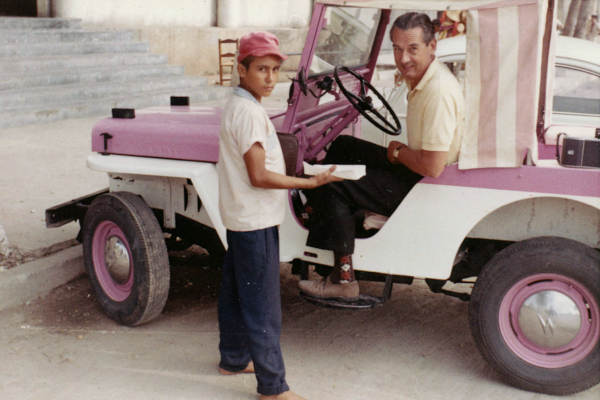 A photo taken on location in Acapulco showing Art Director Walter Tyler in a Las Brisas DJ-3A, suggests that it's not just a coincidence that the Jeeps are in the background above. (But the Willys truck on the far right above might be a coincidence.) 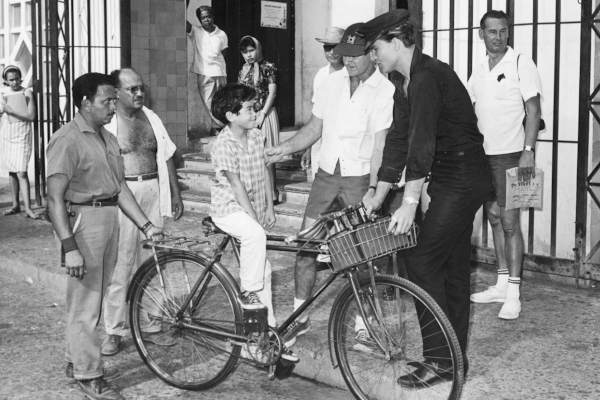 Larry Domasin, the child star who plays Raoul, talks here with second-unit director Micky Moore and the unidentified body double for Elvis Presley, who is seen in some wide shots but is obviously not the real thing (60K JPEG).

Presley was unable to travel to Acapulco because he was considered persona non grata by Mexican authorities as a result of some bad tabloid newspaper publicity. (Wikipedia) 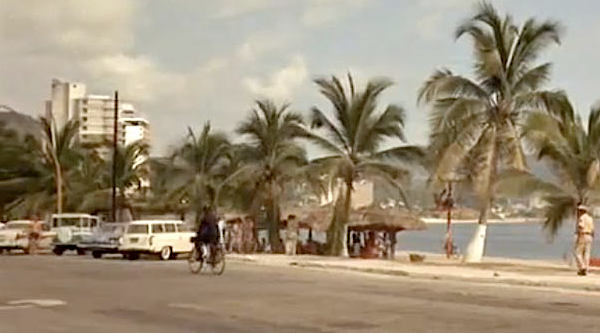 The Las Brisas Jeeps were not the only Surrey-style Jeeps in Acapulco; at the end of Elvis' song on the bicycle (right) we get a glimpse of a Jade Tint Green example in the distance. 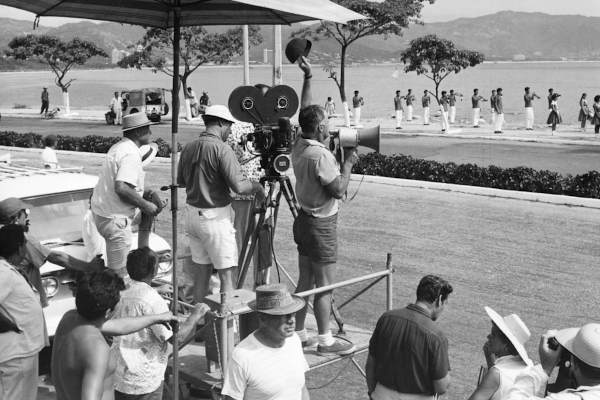 A production still, shot on location in Acapulco, shows Micky Moore instructing extras through a bullhorn. It includes what appears to be a DJ-3A with full canvas top in the background, possibly attached to the film crew. 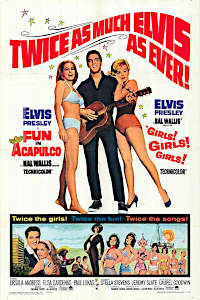 In Fun in Acapulco Elvis plays Mike Windgren, who finds himself in Mexico needing a job. A street urchin named Raoul helps him get hired as a lifeguard and singer at the Acapulco Hilton. He soon finds himself being pursued by a famous lady bullfighter (Elsa Cardenas) while he's more interested in the beautiful hotel social director Marguerita Dauphin (played by Ursula Andress, fresh from her startling Hollywood debut as Honey Ryder in Dr. No.)

We soon discover that Mike is a former circus trapeze artist who lost his nerve when he let his brother fall to his death. But after singing lots of Latin songs he realizes he has to get on with his life, and at the end is able to make a daring cliff dive into the bay. 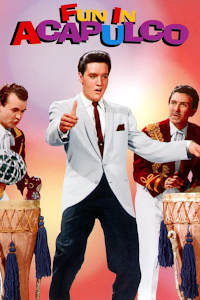 This cover from the video re-release (left) is more reflective than the original poster (above) of the actual look and music of the movie.

A review by Shane Paterson on the Internet Movie Database comments, "The Mexican flavor of the film is tastefully done and is consistent and authentic. It was really a natural combination. Elvis had always -- since the '50s -- incorporated some Spanish and Mexican stylings into his dress... and the same is true of his music. Although Elvis' prime influences were black and white gospel traditions, blues, country, and Dean-Martin-style pop balladeering, many of his 60's and 70's songs have an obvious Spanish tinge. In the 1970 documentary, Elvis: That's The Way It Is, Xavier Cugat states for the camera that Elvis 'sings Spanish songs like nobody.'" 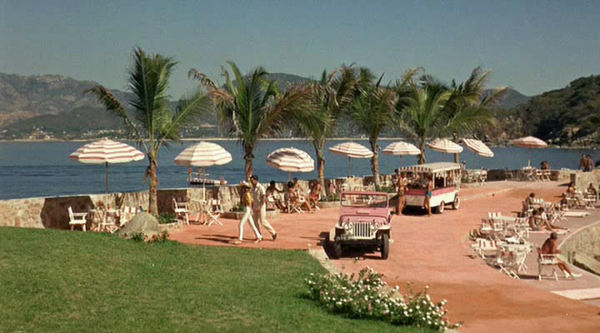 In one scene, Presley's double drives up in a DJ with Ursula Andress. There is then a cut to a studio shot of Elvis and Ursula sitting on the seawall, with the Bay behind them. 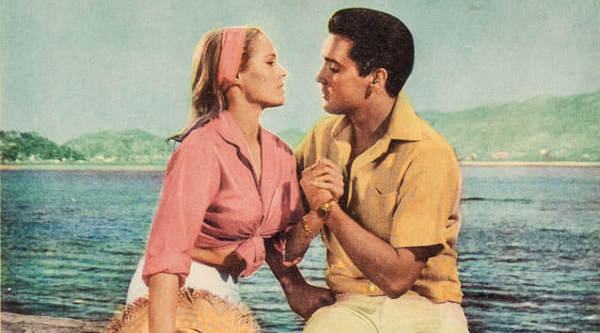 The two-shot is one of the film's many back-projection composites by Farciot Edouart, which are convincing enough that many people never notice the illusion. Edouart had been doing process photography on hundreds of films in Hollywood since the 1930's, including Hitchcock's Vertigo (1958) and Elvis' Blue Hawaii (1961). He had just finished work on It's a Mad Mad Mad Mad World (1962). 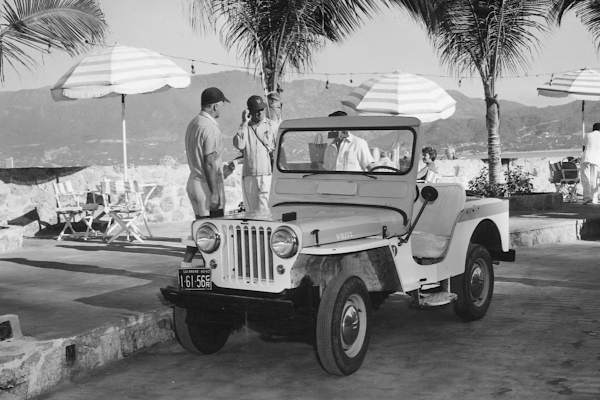 This production still provides a pretty good look at the pink Dispatcher, with a number on the cowl that suggests it's part of the Las Brisas fleet.

In another production still, Ursula looks unenthusiastic (140K JPEG) as second-unit director Micky Moore tries to get her in the mood without Elvis. 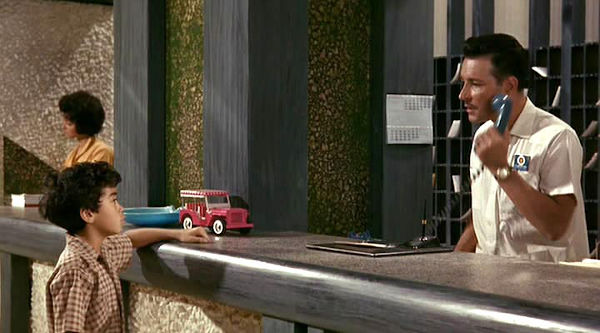 Since the action takes place at the Hilton, not at Las Brisas, an odd detail is the Tonka Toy Surrey on the hotel reception desk, which was presumably a Hollywood set. 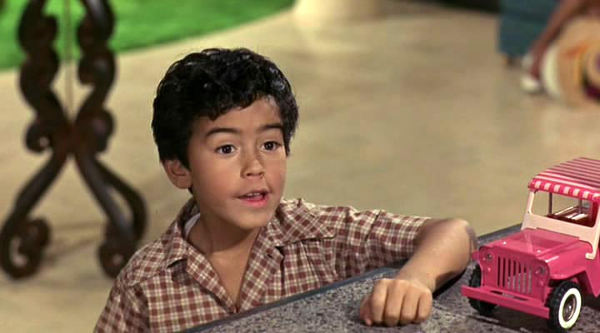 Perhaps an example of "product placement" for the brand new toy (released by Tonka in 1962), or perhaps just the recognition by art director Walter Tyler that the pink Jeeps had become associated with Acapulco in general. 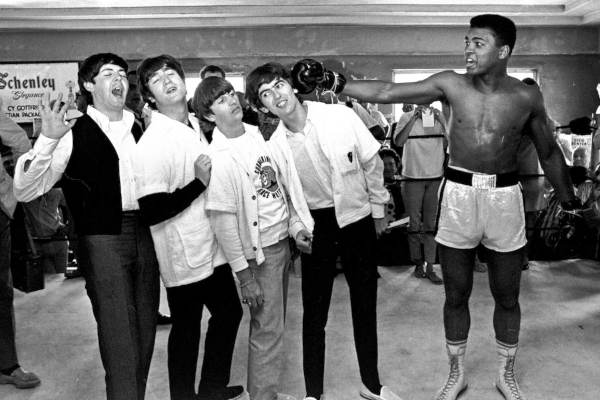 The Beatles watched Fun in Acapulco at a Miami drive-in theater on 17 February 1964, the same day they posed for this famous photograph with Cassius Clay (AP photo). They may have been hoping for something more like Elvis' 1957 film Jailhouse Rock, which featured a darker atmosphere and a more menacing Elvis. Although both films were directed by Richard Thorpe, Fun in Acapulco is different fare altogether: "Elvis' emasculation by the Hollywood machine is obvious in most of his 60's 'travelogue' musicals, and this film presents the sanitized Elvis in his full glory, lacquered hair and all." (Shane Paterson, IMDB)

Elvis Presley had changed the music business (see Top 20 of 1956) but now he was letting the business change him, something that would never happen to the Beatles. "Bossa Nova Baby" would be Elvis' last top-10 record before the "British Invasion" began.

Thanks to Vilero in Spain for spotting the Jeeps in this movie, and Federico Cavedo for finding the production stills. -- Derek Redmond

See more of the Las Brisas Jeeps in The Ambushers (1967).

Return to Surrey Jeeps in the Movies.

See also The CJ-3B in the Movies.