Air America is another Vietnam War-era film with CJ-3Bs in a small supporting role (unlike the major role for a 3B in Good Morning Vietnam). Starring Mel Gibson and Robert Downey Jr., Air America was released in 1990 and was directed by Canadian action director Roger Spottiswoode.

The film is actually set not in Vietnam but in neighboring Laos. Jeff Cross summarizes the plot: "Air America was the CIA's private airline operating in Laos during the Vietnam War, running anything and everything from soldiers to foodstuffs for local villagers. After losing his pilot's license, Billy Covington (Downey) is recruited into it, and ends up in the middle of a bunch of lunatic pilots, gun-running by his friend Gene Ryack (Gibson), and opium smuggling by his own superiors." (Internet Movie Database) 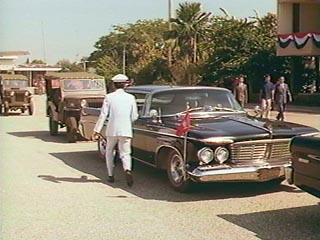 The action takes place in 1969, and the film was shot in Thailand (as well as in the US and UK). A pair of Willys M606 Jeeps (military CJ-3Bs) make a couple of very brief appearances, carrying the bodyguards of a Laotian General. The General himself is riding in what appears to be a 1963 Chrysler Imperial.

Peter Travers' review in Rolling Stone comments: "Air America is a meaty topic for a movie. And Roger Spottiswoode, who vividly recounted Nicaragua's Sandinista revolution in Under Fire, seems an ideal director to explore the ironies of its existence. The trouble is that there aren't any ironies in the depressingly predictable screenplay by John Eskow and Richard Rush. The film remains stuck in a farcical groove, with Downey playing green kid to Gibson's grizzled vet." 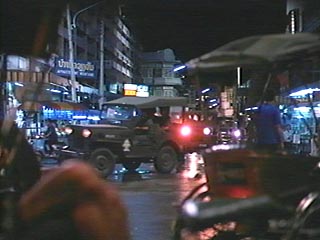 Hal Hinson of the Washington Post adds: "Too often, the movie collapses into routine action high jinks; there are too many close shaves, too much crashing and burning. The scenes involving the visit of a Bible-thumping U.S. senator (Lane Smith) and the attempts by the American brass to keep him in the dark are tedious and unfunny, and it doesn't help that in playing the senator Lane seems to be mimicking his own astounding performance as Richard Nixon on television in The Final Days."

In one scene, the American senator is escorted by the Jeeps on a tour of Laotian nightlife. A white symbol painted on the side of the two Jeeps appears to be the design from the pre-1975 Laotian flag, of three elephants under an umbrella. This is an unusual level of detail for a Jeep used as a movie prop; the more common attitude of the art department seems to be "a Jeep is a Jeep." If Thai military vehicles were used in the filming, it may have taken some negotiations as well as cash changing hands, to get the Laotian markings applied. 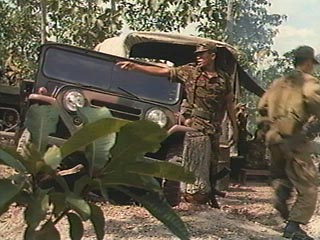 M606s sent to Laotian forces as military aid from the U.S. are probably authentic for 1969, but an M151 MUTT, seen for a moment near the beginning of the film, seems less likely. This was becoming the standard jeep for American forces in Vietnam, but was it supplied to allied countries? 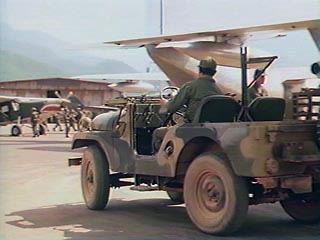 Also seen in the film is an M38A1 in use as a utility vehicle at the CIA air base. Aircraft fans will spot a number of interesting old planes in use, which I won't attempt to identify here.

Laotian flag by Vincent Morley and Antonio Martins. For more details, see Laos, 1952-1975 on the "Flags of the World" website.

Thanks to John Carroll for spotting the Jeeps in this film. -- Derek Redmond

See also CJ-3Bs in The Deer Hunter and Good Morning Vietnam, or return to The CJ-3B in the Movies.