Six months? I have a rented car! 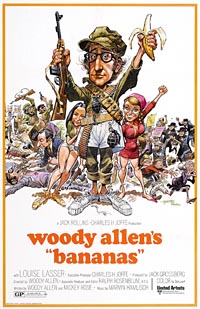 In this early Woody Allen comedy from 1971, Allen plays consumer products tester Fielding Mellish, who has a crush on Nancy, a political activist (played by Louise Lasser). He attends demonstrations and tries to convince her that he's right for her, but Nancy wants someone with greater leadership potential.

Nancy: "You're immature, Fielding."
Mellish: "How am I immature?"
Nancy: "Well, emotionally, sexually, and intellectually."
Mellish: "Yeah, but what other ways?"

So Fielding runs off to Latin American dictatorship San Marcos, where he eventually joins the rebels. 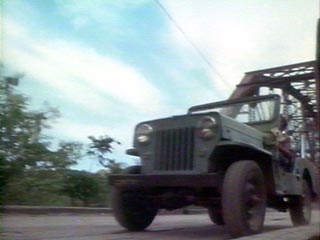 David Rogers sent an e-mail to CJ3B.info saying "There is a scene where Woody Allen can be briefly seen driving a 3B just before he is taken prisoner by the revolutionaries."

And yes, it is brief -- but if you can pause the VCR at the right moment there are some details to be seen. Somebody else is actually driving, and Fielding Mellish is in the passenger seat. The hood latch on the driver's side is missing. 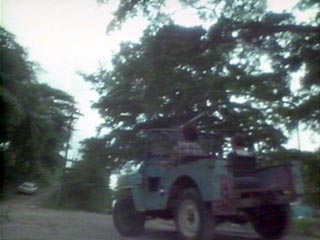 From the rear, we can see the tailgate is also missing, but most of the framework for a factory canvas top seems to be in place. The well-worn spare tire is in the back of the Jeep.

Moments later, the rebels appear out of the bushes, chase Fielding and bring him to their headquarters, where he has this exchange with their leader: 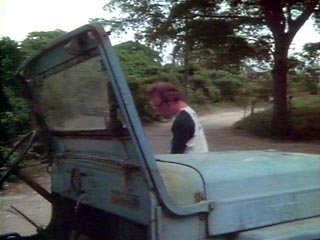 Fielding's rented car is a CJ-3B with a late-style dashboard and early-style parking brake, dating it as between about 1957-62. It has the optional ventilating windshield, which might suggest military surplus, but more likely was just ordered because of the warm climate -- the San Marcos scenes were shot in Puerto Rico. 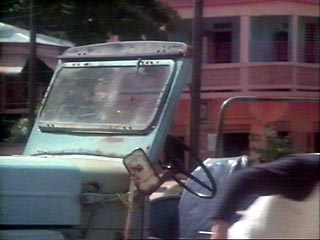 The different lighting and background in the next shot, where Fielding runs away from the Jeep, suggest that it may have been done in a different location. But it does give a look at the aftermarket rearview mirror and the windshield wipers which could also use replacement.

Fielding eventually becomes President of San Marcos. While on a trip to the U.S., he meets Nancy again and she falls for him now that he is a political leader.

Woody Allen has reportedly said in interviews that the film was called Bananas because there are no bananas in it.

Thanks to David Rogers for the tip. -- Derek Redmond