Quick quiz: Name two movies that have all of the following: a Jeep CJ-3B, a 2WD Dispatcher Jeep, and a bunch of surfboards. It wouldn't be an easy Trivial Pursuit question, particularly because most of the Jeep appearances are brief and distant.

For example, take this shot from the 1961 Elvis Presley vehicle Blue Hawaii (1961). As Elvis' girlfriend arrives at the Honolulu airport in to pick him up in the red MG, she passes a pink DJ-3A Surrey Gala in the parking lot. (Interestingly enough, when they leave the airport a few minutes later, the Surrey is still in the parking lot, but in a different spot.)

A Surrey also appears in a night scene later in the film.

Blue Hawaii was the first of three Elvis movies to be filmed in Hawaii, followed by Girls! Girls! Girls! in 1962 and Paradise, Hawaiian Style in 1965. (In between, he appeared with more Surrey Jeeps in Fun in Acapulco,1963.) 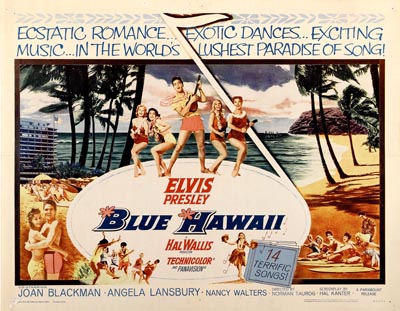 Blue Hawaii set the tone for Elvis' future film career -- pretty locations, gorgeous girls, thin stories and mediocre songs -- but it was one of his most successful films. Presley's remake of the title song introduced it to an audience too young to remember Bing Crosby's original version from the 1937 film Waikiki Wedding.

In the slim plot of Blue Hawaii, Chad Gates (played by Elvis) has just gotten out of the Army, and is happy to be back in Hawaii with his surfboard, his beach buddies, and his girlfriend (although he and the stewardess seem to have enjoyed the flight home.) For an entertaining plot summary, see Theory of Chaos.

Perhaps the most exciting moment in the film comes as Chad is welcomed at the airport, because we catch a glimpse of a CJ-3B on the tarmac, modified to carry a luggage loading ramp. Steve Mehls spotted this Jeep in Blue Hawaii. 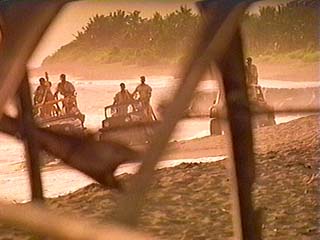 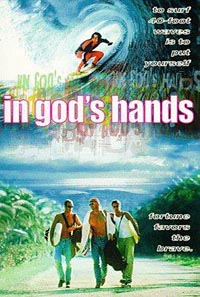 Three decades later, but with a plot that's just as thin, the 1998 film In God's Hands follows the adventures of three surfers as they travel to Madagascar, Bali and Hawaii in a search for the ultimate wave. The nice cinematography by John B. Aronson includes this shot of the local African military arriving to shut down a beach party and round up the beach bums. 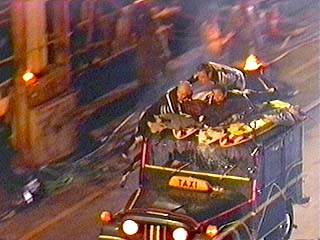 The surfers manage to escape from jail, and dressed in skeleton suits, they hitch a ride with their surfboards on a Postal Jeep taxi, in a wild nighttime chase scene.

In God's Hands was directed by Zalman King, who in the days of the CJ-3B was an actor, appearing in TV series including Gunsmoke, The Munsters and The FBI.

Thanks to Eric Keselburg who told me about In God's Hands, and to the Internet Movie Cars Database for the Blue Hawaii frame enlargements. -- Derek Redmond

Another movie with surf and Jeeps: Ride the Wild Surf.