Dharmatma is a 1975 film directed by Feroz Khan, with a long and complicated gangster plot. It's basically a Bollywood remake of The Godfather (1972), with the locations changed from the U.S.A. and Italy, to India and Afghanistan. It was the first Indian movie to be shot in Afghanistan, and it's entertaining although a bit cartoonish in places, and with the usual badly lipsynced Bollywood musical numbers. The Michael Corleone character here is named Ranbir; his father, who has made a fortune from organized gambling, is known as Dharmatma or "Saint." (1)

Ranbir leaves India for Afghanistan, where he acquires a Willys CJ-3B. It's one of the few examples I have seen of a flatfender Jeep in that country. (And it's likely that none of those Jeeps have survived the decades of war there since the Soviet invasion in 1979.) 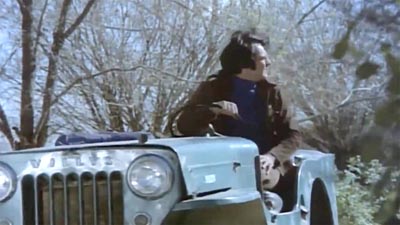 The late 1950s or early 60's CJ-3B, with its hood unlatched and no windshield, is an important element in the most romantic and tragic part of this story.

We first see the Jeep when Ranbir is driving along the road and something catches his attention. 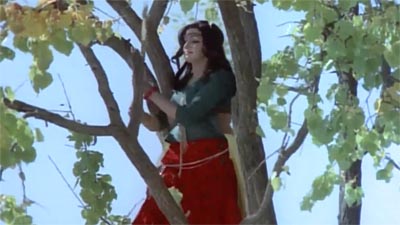 Up in a tree is a beautiful young woman, Reshma, keeping an eye on a herd of goats. 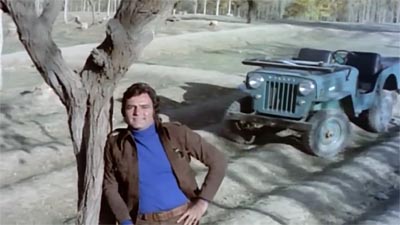 It's love at first sight for Ranbir.

(The continuity of details on the Willys is somewhat sloppy throughout the film. For example, this is the only shot where the windshield is in place, so this was probably the first footage shot of the Jeep, before director Feroz Khan decided to remove the windshield.) 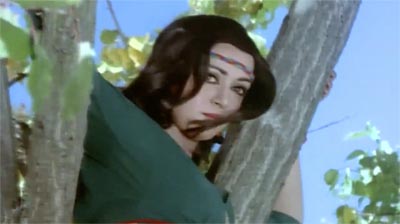 Reshma tells him he's asking for trouble, because she's engaged to an Afghan man, who then shows up on horseback and tries to kill Ranbir. 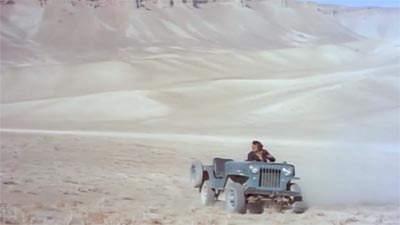 But Ranbir can't forget her, and before long he's driving around again in the dramatic scenery of Afghanistan, looking for her. 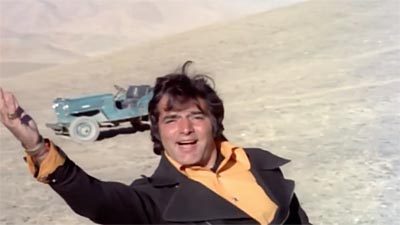 When he finds her, he uses the Bollywood approach and lipsyncs a song: 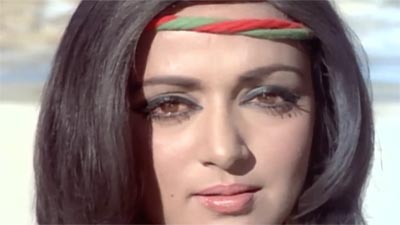 Maybe it's the song, or maybe it's his Willys, but this time, Reshma also finds herself falling in love. 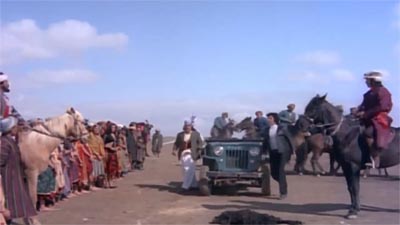 There is an amazing sequence of scores of Afghan men on horseback playing the fierce national sport of buzkashi. Then Ranbir appears again in his CJ-3B to ask for Reshma's hand in marriage. 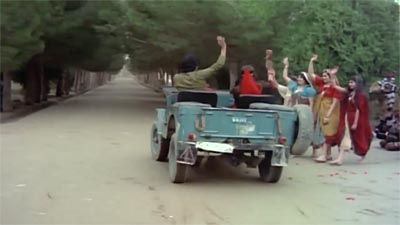 After her family is convinced, Ranbir and Reshma leave in the Jeep for the trip to a temple, to be married. 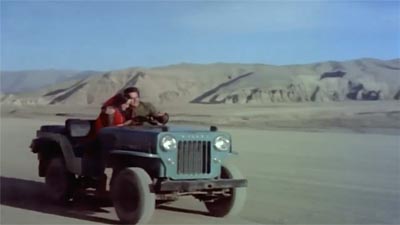 He breaks into a love song as he drives the CJ-3B. The duet has lyrics like:

(The spare tire has disappeared from the side of the Jeep; probably the film crew had to change a flat.) 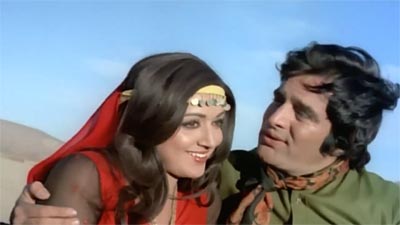 After failing to sign Bollywood superstar Rajesh Khanna (see Love Song in a Jeep) to play Ranbir, the film's director Feroz Khan decided to play the role himself. (4) Dharmatma turned Khan into a major action star in India. He died in 2009 at age 69. (5)

Reshma was played by Hema Malini, who also went on to become a star, and since 2003 a politician. (6) 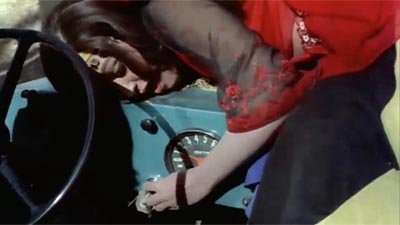 When Reshma wants to stop for a while, she just slides provocatively up onto the hood while Ranbir is driving, and turns off the ignition. Maybe this scene is why Feroz Khan decided to remove the windshield. 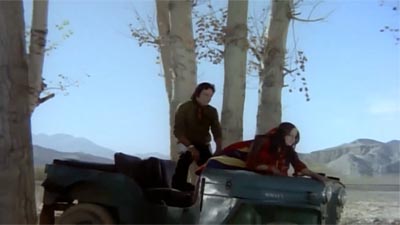 The way she fondles his Willys makes this possibly the only onscreen example of a CJ-3B being cast in the part of a sexy vehicle. 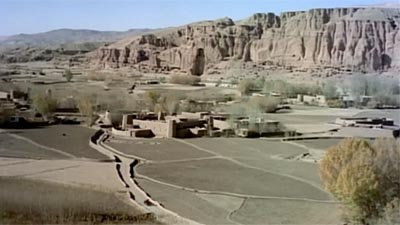 They drive through the Bamiyan Valley; the Jeep can be seen here on the road at the bottom of the frame. This is the site of the famous Bamiyan Buddhas, huge statues carved into the sandstone cliff in the 6th century. The largest Buddha, 170 feet tall, can be seen in the center background, in a tall cave cut into the rock. This massive statue was dynamited by the Taliban in 2001. (7) 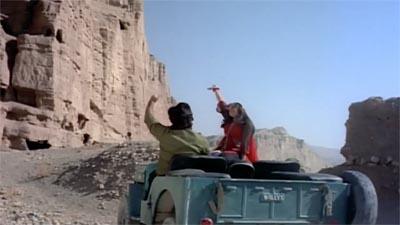 Still singing, Ranbir and Reshma arrive at the site of the temple, which is also in a cave. (The spare tire has reappeared.) 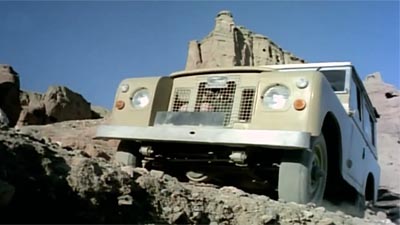 But criminal rivals of his father have been following them in a Land Rover! 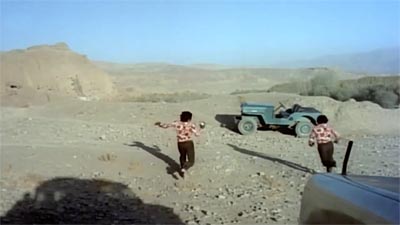 In their matching shirts, two scheming brothers grab an opportunity while the happy couple is in the temple and the CJ-3B is unattended (with the spare wheel missing again). 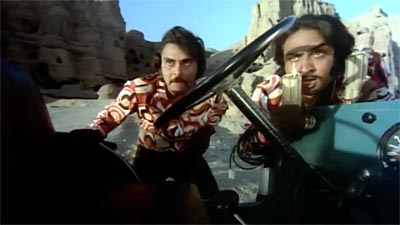 They plant a bomb in the Jeep. 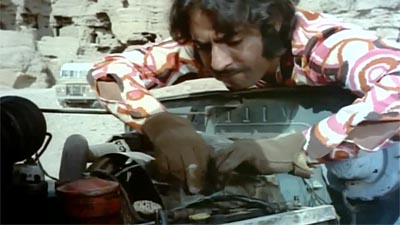 It's wired through the ignition switch, and directly to the battery. 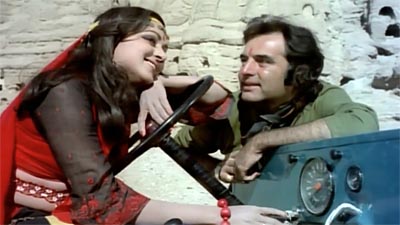 Ranbir and Reshma return from the temple, blissfully unaware of the danger, and she fingers the ignition key. 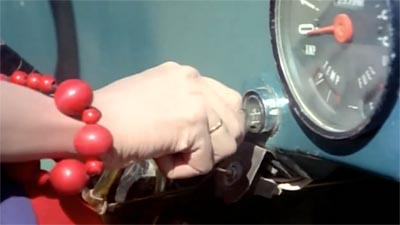 Ranbir steps away for a moment, and Reshma finally turns the key. 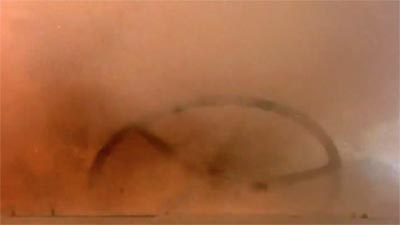 Instantly there is an explosion. 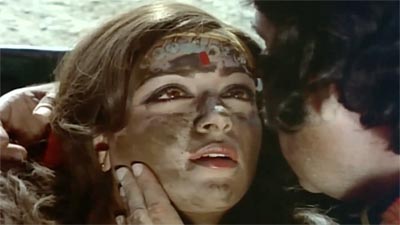 Luckily her face is only a bit dirty for her closeup, as she dies in Ranbir's arms. 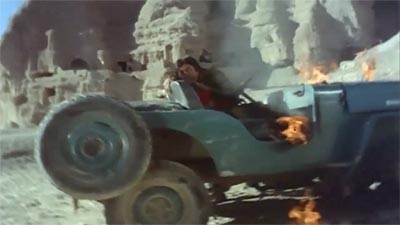 The CJ-3B plays the same part as the 1946 Alfa Romeo 6C (40K JPEG) in the original Godfather, in which Michael Corleone's wife Apollonia was killed when she started the engine. (8) 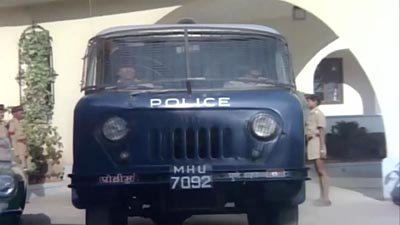 Ranbir returns to India and takes revenge on the rivals, who meanwhile have also killed his father.

Then he turns his father's ill-gotten fortune over to the police, who take it away in a Mahindra Jeep FC-160 paddy wagon. (See a 1972 Mahindra catalogue on CJ3B.info.) 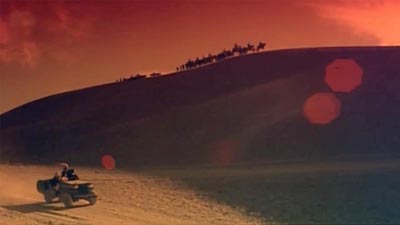 Dharmatma ends differently from The Godfather. Ranbir heads back to Afghanistan in the final scene (and seems to be driving the same Willys CJ-3B.) In this beautiful shot a group of nomads rides past on the horizon. For a moment Ranbir thinks he sees Reshma, and tears come to his eyes.

Thanks to Suhail Qureishi for telling me about Dharmatma. You can watch the whole movie (with or without subtitles) on YouTube. -- Derek Redmond 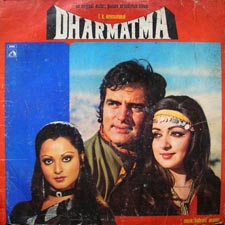 See also Love Song in a Jeep, from the classic film Aradhana (1969).

See more Bollywood Mahindras in CJ-3Bs in the Movies.

Return to Mahindra Jeeps on CJ3B.info.