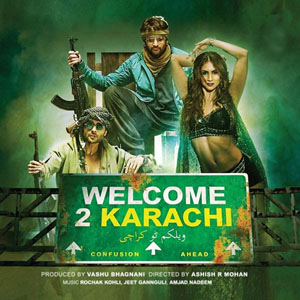 The film is about two dimwits, Shami and Kedar, who try to sail from India to the U.S.A. but end up on the beach in Karachi, Pakistan. Is it possible for two Indians to get out of Pakistan alive without their passports? Confusion and hilarity ensue. There's a pretty good plot summary at Wikipedia.

Even funnier is the fact that the entire Hindi-language film was shot in various locations around Britain. Scenes in a Taliban camp where the duo are mistaken for Talibani militants, were shot in Wales, with ex-Royal Marines and paratroopers serving as extras with firearms.

The Mahindra CJ340 which helps create the illusion of being in the tribal provinces, is John Carroll's Jeep which he calls "Mad Hilda" and which he wrote about in 1997 for Jp magazine (see The Mahindra Jeep on CJ3B.info.)

Oddly enough, a brief scene which takes place the previous night, uses a different Jeep -- it appears to be a CJ-3A. The sequence was presumably shot at a completely different time and location.

Another oddity of this international production is the casting of American dancer and actress Lauren Gottlieb as a Pakistani military intelligence agent (disguised as a dancer.) Lauren is best known for being a contestant on the reality show So You Think You Can Dance and has since appeared in Indian film and television.

A Times of India reviewer gave the film 2.5 stars out of 5, and said "The cardinal rule of films like Welcome 2 Karachi is to not to take it too seriously. Keeping true to its publicity of being a random comedy, the film is successful in making you laugh intermittently at its cliched gags."

The copies I have seen of this film online don't have English subtitles, but you can get a pretty good idea of it from the trailer on YouTube. -- Derek Redmond

Also on CJ3B.info, see John Carroll's other Jeep in The Worst Car in the World?.