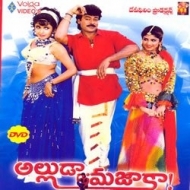 Alluda Mazaaka! (or Alluda Majaka) is a 1995 Indian film in the Telugu language, directed by E.V.V. Satyanarayana, with "Tollywood" megastar Chiranjeevi in the lead role. I haven't been able to find an English translation of the title.

The film opens with the hero Sitaramudu, who has been unjustly sentenced to death, being transported in a police van escorted by a Mahindra Jeep.

Continuity is not the strongest element; moments later, the Jeep is sporting extra lights on the front, and the paddy wagon has a roof rack.

After they happen to pass a wedding ceremony where the love of his life is preparing to marry somebody else, Sitaramudu breaks out of the van and dives for freedom as police Jeeps close in from all directions.

He is inexplicably able to send one of the Jeeps flying, in the first big stunt of this famous chase scene featuring numerous CJ-3B stunts and mistreated horses.

Mounted police arrive to round up our hero (60K JPEG) but he manages to get his hands on one of the horses, and is seen here in the background racing toward the camera, being chased by the rest of the horses and one of the Police Jeeps. A flatbed truck pulls across the road, blocking their path.

The policeman driving the Jeep looks worried about the truck. Meanwhile, horse and rider, in a series of fake-looking shots, are able to slide right under the flatbed.

As the horse (left) slides under, the policeman somehow manages to use body English to launch the Jeep over the truck.

It's clearly a real stunt, not a fake visual effect. As the Jeep touches down, the front tire folds and the frame flexes under the impact. The hood almost pops open (110K JPEG), but amazingly the Jeep stays upright.


C.N. Sreejith is a visual artist who works in the business in India and has seen a few of these stunts. He comments on the horse-under-the-truck sequence:

"The stunt of a CJ-3B flying over a flatbed truck is not uncommon in the Indian mainstream cinema, especially those in the regional languages of Telugu and Tamil. The actor riding the horse is Chiranjeevi, who is well-known for such stunts. "

"The stunt performed with the CJ-3B is quite real. You get hold of a dilapidated Jeep, with or without an engine. If it has an engine, it is first driven fast onto a ramp to gain altitude and jump over the flatbed truck. In this case, the ramp is hidden by the cabin of the truck. If it doesn't have an engine, it is towed by a fast and powerful vehicle, using black steel ropes which can be easily erased digitally from the film, and forced on the ramp, to gain altitude and fall on the other side. Usually, the Jeep does not survive the impact. If it survives, it gets another chance in another movie.

"The Jeep that the police officer is driving is not the same as the one which does the stunt. It just has the same drab blue color, that's it. The stunt vehicle, if it does not have an engine, may not even have a driver. I assume this was the case in this clip, as the jump was not a balanced one. If they had an experience stuntman driver, the vehicle would land on both the front wheels, which is far less damaging to the vehicle, as well as the driver.

"How it is capable of standing upright after the impact, I don't know. My experience with CJ-3Bs, no matter how old their design is, they have, like cats, an inherent capability to fall upright. You may break your front leafsprings and crack your chassis, but usually it manages to keep its upright position. Probably because it doesn't have a proper crumple zone which gets shattered on impact.

Rows of small cars are constantly getting in the way, and two 3B's are both able to leap over them in this one shot.

A police Jeep manages to block the horse's path, forcing Sitaramudu and the pursuing posse to ride through a huge china shop with many glass doors, causing predictable destruction.

Even one of the Jeeps winds up coming through a display window.

The cops bring their newer, white vehicle into the chase; maybe it's the chief's car. We soon learn it can jump (100K JPEG) just as high as the 3B's.

But both vehicles are totalled when they do cartwheels on landing, and Sitaramudu rides off to the wedding amid numerous exploding small cars.

The next two hours of the movie are completely different, with lame, confusing dialogue scenes alternating with bizarre dance routines (70K JPEG).

At the very end of the film there is another set-piece action sequence with plenty of explosions, as villains in boats chase our hero riding a jet-ski (50K JPEG).

Two police Jeeps (50K JPEG) show up on the pier, as well as a helicopter and the first full-size American car seen in the film.

At the last minute Sitaramudu, dangling from the helicopter, is able to pluck his girlfriend from the sunroof of the car as it careens off the pier, and Alluda Mazaaka! ends with them living happily ever after.


The complete film is now on YouTube. -- Derek Redmond

See also a Mahindra Jeep in Ladakh (4 MB QuickTime video) from a documentary I photographed. Not quite as wild, but still pretty nervy driving.

See more Mahindras in the movies in: