Here's a film filled with interesting old Jeeps, mainly because it was shot in the Philippines. But be warned it's not what you would call a family film -- there's a fair amount of drugs, violence, nudity and low production values, in this 1973 release from B-movie kings American International Pictures. And it's not easy to find on video, but as of 2011 it's available in a double-feature DVD box with Foxy Brown, a better-known AIP film also featuring "blaxploitation" star Pam Grier. The title Black Mama White Mama probably hasn't helped its availability; the film was released on video in the U.S. at one point under the title Women in Chains (see imdb.com.) 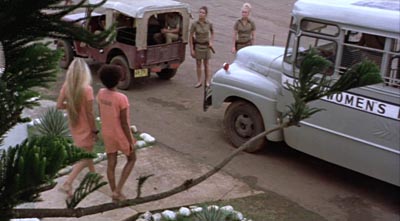 The plot revolves around two young women who, in the first 20 minutes, escape from prison in some undetermined, possibly Latin American country. Chained together at the wrists, they are pursued for the rest of the film by cops, gangsters and rebels. It's essentially a remake of The Defiant Ones (1958) which starred Sidney Poitier and Tony Curtis as the two convicts. This version was directed for AIP by veteran Filipino action director Eddie Romero. 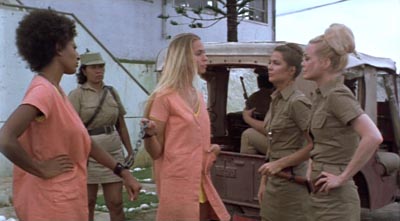 Pam Grier's blonde co-star is Margaret Markov, in one of the last films of her short career. She had, perhaps not coincidentally, done another women-in-prison film in the Philippines the year before, The Hot Box (120K JPEG). Her teaming with Grier was well-received, and they starred together again in 1974 as "black slave white slave" in the female-Roman-gladiators movie The Arena (90K JPEG). According to imdb.com she married the producer of that film and soon gave up acting. 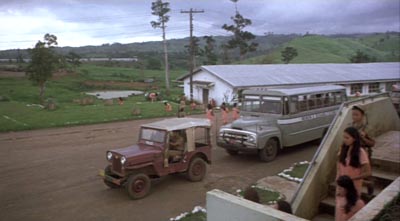 A CJ-3B is the all-purpose vehicle used by the prison guards. At one point there's a shot of the Jeep's interior (70K JPEG) showing the frame for the canvas soft top.

The two women are classified as high-risk prisoners, and quickly put into a bus heading for a maximum-security prison. Leading the convoy is the 3B. The Jeep was probably rented for the film shoot from a local resident, and dressed for the role by having "Police" painted below the windshield. 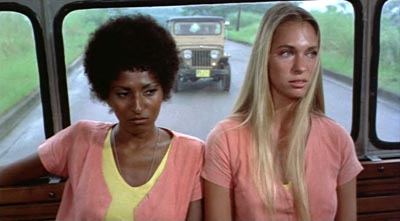 Like the first kids on a school bus, our heroes score the back seat, but they still seem unhappy. However, we're happy because we get our first look at a CJ-3A driven by the police escort (who have forgotten to turn off their left turn signal.)

Probably the owner of this well-preserved 3A didn't want the props crew of the film to stencil "Police" over the Jeep's nice clean paint. 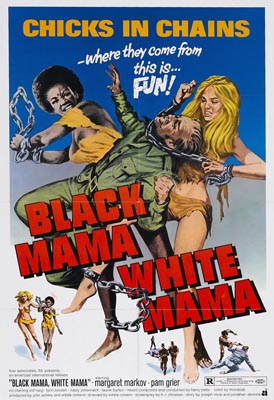 Ali Davis on Amazon.com says: "Grier stars as Lee Daniels, a pimp-and-drug-lord's moll who's looking for a way to escape both prison and her thug boyfriend. The dynamic Margaret Markov ably backs her as rich-girl-turned-revolutionary Karen Brent. The two meet in the friendliest Third World prison ever (Tickling games in the shower! What girlish fun!) and before you can say catfight they're chained together at the wrist.

"A quick prison break later, our feisty ladies are being chased all over the undefined tropical island by the police, revolutionaries, and dueling pimps. Black Mama, White Mama hits every mandatory facet of the genre, including butt kicking, gunfire, an Evil Lesbian Prison Guard, gratuitously scanty clothing, and dressing up as nuns. Absolutely not to be missed." 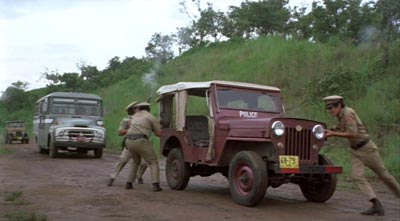 Surprise, surprise, the convoy is ambushed by a band of revolutionaries. In the confusion, the girls escape from the bus and head across country, still chained together. As the cops run for cover, we get a good look at the roll-up doors on the CJ-3B. 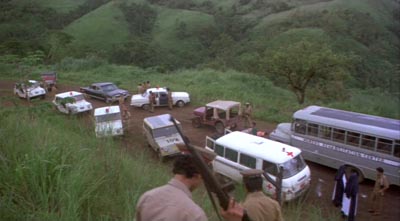 The police reinforcements arrive too late, but at least this time they seem to be driving actual police vehicles. A closer shot (60K JPEG) reveals the name "Pulisya" (the Philippines national police) on the side of one of the Volkswagen 2WD utility vehicles. (See more on the VW's below.) 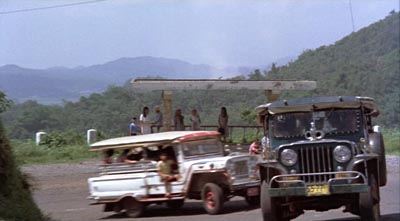 Another clue to where the film was actually shot comes soon, in the form of a couple of passing jeepneys, the ubiquitous stretched and decorated Jeep-based mini-buses of the Philippines. This green 3B jeepney is notable for its hood ornament (70K JPEG). 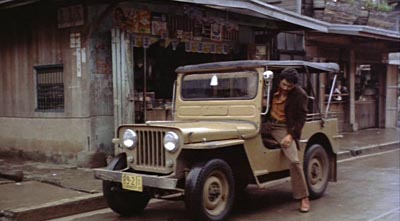 We see the sharp CJ-3A again when the "good cop" pulls up to a small-town pool hall, where he tries to make a deal with the local gangsters to help capture the escaped prisoners. Speaking of hood ornaments, the 3A sports a few subtle appearance upgrades. 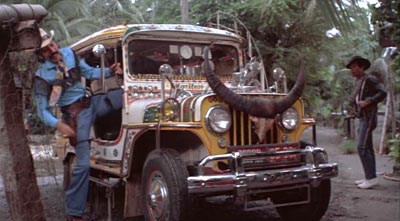 The gangsters' ride is less subtle. Sid Haig as Ruben, the cowboy gang leader, gives a performance that's almost as much fun as their jeepney with its water buffalo horns. A closer shot gives a better look at the six rear-view mirrors (70K JPEG) and, once again, a horse on the hood. 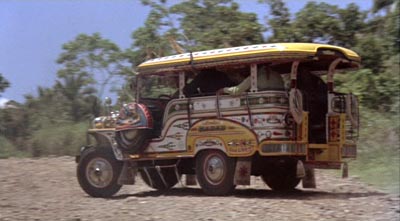 When the gang spots the police tailing them, they don't hesitate to make a 3-point turn for a confrontation. A nice touch on the cowboys' jeepney is the coiled ropes hanging on the rear. We also get a glimpse of the interior (70K JPEG). 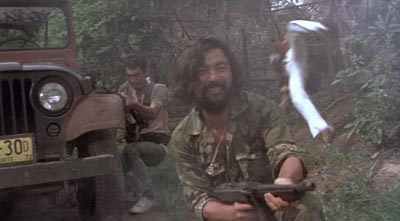 Meanwhile, the rebels led by Ernesto (played by veteran Filipino actor Zaldy Zshornack) are trying to find and rescue the escapees. They soon get into a disagreement with the cowboys. Note the stuntman in white bell-bottoms flying through the air here, as well as the beat-up M38A1 (70K JPEG). We also get to see the rebels driving the A1 across a river (70K JPEG). 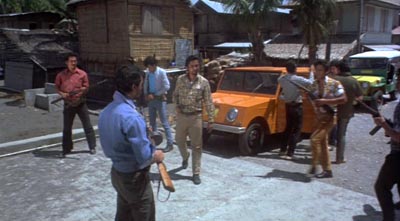 The big-city pimp's gang also has a Jeep, seen in the background here. We don't get a good look at it, but it appears to be a DJ-3A. Their primary transportation is a shiny orange example of the VW "Country Buggy" which was very popular in the Philippines at the time. Even the Internet Movie Database, which doesn't mention the Jeeps, comments, "Several VW Country Buggies are seen in the film -- these were manufactured by Volkswagen of Australia between 1968-72."

A close look (70K JPEG) reveals that the orange one is actually not a VW, but a DMG Sakbayan, built locally using the same design, after the supply of imports from Australia dried up. An article on The Evolution of the Sakbayan: 1968-1980 explains that the Country Buggy was imported from Australia and assembled by DMG until 1972. For the next year, DMG sourced a chassis from Germany and built the "Sakbayan 815" body, modified to fit the new components. Then after 1973 DMG used a chassis and drivetrain from Brazil for their Sakbayan. 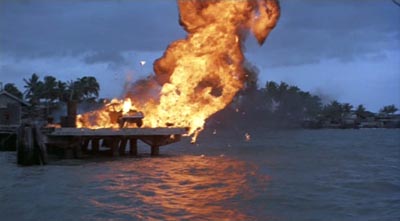 Shortly after the revolutionaries and the girls show up at the waterfront in the M38A1 (70K JPEG) for the final confrontation with the big-city gang, the orange Sakbayan meets a fiery end. In case you get a chance to watch the film, I won't reveal who survives the climactic shootout.

The police, in another CJ-3A and Sakbayan (70K JPEG), again show up too late to do anything but clean up the mess.

Thanks to whoever it was, years ago, who mentioned this film to me. I have to admit I kind of skipped through the DVD looking for Jeeps, but if you have nothing better to do, it only takes 86 minutes to watch the whole film. -- Derek Redmond