Chuck Norris in a CJ-3B 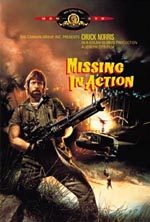 You've probably heard some of the many well-known "facts" about Chuck Norris, such as:

Well, how many reasons do you need to watch a Chuck Norris film?

Yes, it was only natural that Chuck Norris would hook up with the coolest thing on four wheels. Doug Hoffman spotted a high hood Jeep making a brief appearance in the first Missing in Action film (1984). 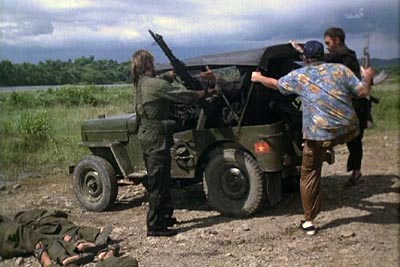 Norris plays Colonel James Braddock, an American officer who spent seven years in a North Vietnamese POW camp. After the war, Braddock accompanies a government team that investigates reports of Americans still held prisoner. He gets the evidence, then launches a mission deep into the jungle to free the American POWs.

The Jeep here appears to be a Mitsubishi CJ-3B, built in Japan and widely used by South Vietnamese forces during the war. It now has the flag of the Socialist Republic of Vietnam stenciled on the rear fender. 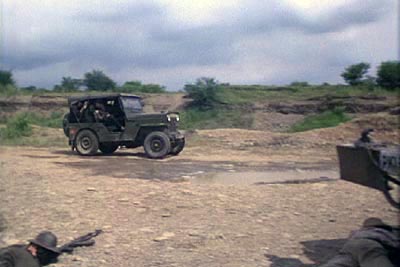 After backing out of his parking space (100K JPEG) Chuck speeds away. Doug says, "Probably 5 or 6 guys all pile into the 3B to make their getaway with Chuck at the wheel."

Marketed with the tagline "The war's not over until the last man comes home," this film was shot in the Philippines together with Missing in Action 2: The Beginning (1985). According to the Internet Movie Database, this film was originally supposed to be the sequel, but when the producers realized this film was the better of the two, they simply renamed them and made the other film a prequel to this one. 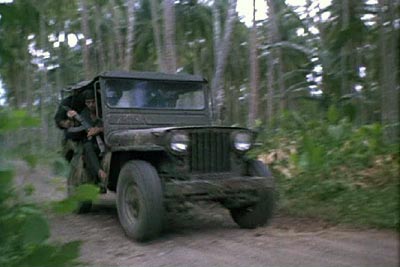 Doug continues, "The camera cuts away to show the pursuers and when they cut back to Chuck and his small group, they are now racing down a dirt road in what appears to be an M38, which is used for the rest of the chase scene."

That kind of continuity error often happens when part of a scene is shot on a different day or location, but it's a bit of a disappointment for high-hood fans when the CJ-3B goes missing in action.

Thanks to Doug Hoffman for spotting the Jeep and grabbing the stills. -- Derek Redmond