CJ-3Bs in the Movies in India 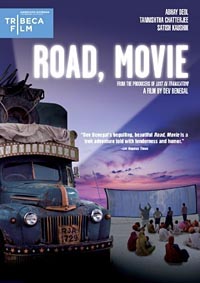 This is the story of Vishnu, a young, carefree guy who hits the road in his old neighbor's antique truck, a travelling cinema carrying film projectors and a collection of films. For him, this truck is a way to escape his family's business selling hair oil, and take a week of freedom while driving from Rajasthan to the sea, to deliver the truck to a museum. On his way, Vishnu picks up several passengers: a smart orphaned boy, an old, wise mechanic, and a beautiful widowed gypsy woman.

The film, by independent Indian director Dev Benegal, is a lyrical tribute to the magic of movies.

The travelling cinema is referred to in the film as a Chevy, but the truck actually appears to be a 1942 Ford. It's the star of the show, and never seems to need refuelling (although its need for water is part of a theme throughout the film.)

Late in the movie, the characters travelling in the truck are finally ambushed by the gang led by the "water lord" who controls the water supply in the desert. They arrive in a Mahindra CJ-3B.

The water lord (with the nice hair and the shades, left in the photo) is in a very cool CJ-3B with no windshield, while his gang is on bikes and in the other 3B. Luckily Vishnu's experience selling hair oil helps him survive this situation. Very strange film. 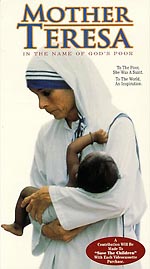 The Internet Movie Database outlines the plot: "This is the true story of Mother Teresa, beginning in Calcutta, India, where she faces adversity from every direction and where she lays the foundation for her crusade to help the poorest of God's poor."

Mother Teresa: In the Name of God's Poor, starring Geraldine Chaplin, is probably not the first movie you would tune in on TV if you were looking for something with Jeeps in it. So I was caught off guard when a CJ-3B was suddenly roaring across the TV screen in the next room. I popped a tape in the VCR and was able to grab the tail end of the scene (below). 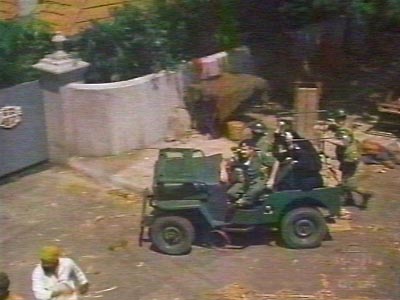 According to the Gale Encyclopedia of World Biography, "In April 1997 filming began on the movie Mother Teresa: In the Name of God's Poor with actress Geraldine Chaplin playing the title role. The movie aired in the fall of 1997 on "The Family Channel" even though, after viewing the movie, Mother Teresa refused to endorse it. Mother Teresa celebrated her 87th birthday in August, and died shortly thereafter of a heart attack on September 5, 1997." 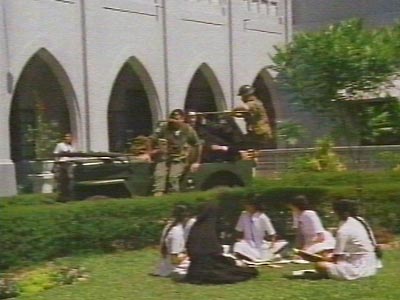 In this scene early in the film, several soldiers in a Jeep are escorting a couple of nuns to a girls' school in Calcutta, through streets filled with unrest. I think Mother Teresa's first exposure to the poverty of Calcutta was actually in the early 1930's, so the use of the Jeep here is probably not accurate. But I expect there are other reasons she did not endorse the film. Unfortunately I didn't see the rest of it. -- Derek Redmond

Ken Bushdiecker comments, "I watched this movie a while back and here is what I recall. The timeline is mainly in 1946 and 1947. So technically neither of the two distinct model CJ-3B Jeeps is correct for this movie. I seem to recall that both Jeeps were fully stamped Willys. However both of the Jeeps shown were right hand drive which is correct for India. One right hand driven Jeep had a modern plastic molded steering wheel. I think one had obvious updated seats installed. One had unusually large, grille-mounted parking lamps. In one scene they were driving about with the w/s folded down forward without hood blocks. The w/s sort of floated up and down."