Jeeps in Octopussy and The Man With the Golden Gun

The Man With the Golden Gun 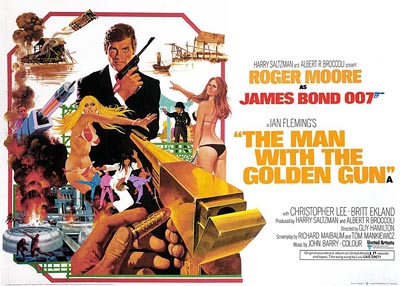 The Man With the Golden Gun (1974) is based on Ian Fleming's 1965 novel, published a year after Fleming's death. It was the second movie to feature Roger Moore as James Bond, and also stars Britt Ekland as Mary Goodnight.

Million-dollar assassin Scaramanga (Christopher Lee), whose trademark is a small golden gun, appears to be trying to kill agent 007. Most of the action takes place in Southeast Asia. Bond witnesses the murder of a scientist who has developed a "solex agitator" that converts solar radiation to electricity and could be an important step in reducing the world's reliance on fossil fuels. The trail eventually leads him to Scaramanga's private island in the Yellow Sea, where the climactic confrontation takes place.

Clearly AMC paid for product placement in the film (which also includes highly unlikely AMC police cars in Bangkok), but the long-wheelbase Mitsubishi CJ-3B in the background here is probably a coincidence rather than a result of AMC's ownership of Jeep at the time.

As it happens, Sheriff J.W. Pepper (from the previous Bond film Let and Live Die) is in the car when Bond steals it. They come to a river and spot Scaramanga's car on the other side, and they pull off what is certainly one of the great auto stunts in movie history -- the barrel roll which is illustrated at the top of the movie poster (180K JPEG). The video clip can be seen on YouTube. 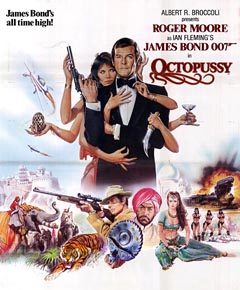 Some might consider Octopussy (1983) to be one of the low points of the James Bond movie series. It was the first of the movies to be based only loosely on Ian Fleming's character rather than adapted directly from one of his novels, and one of the last to feature Roger Moore as 007, a role he was perhaps tiring of after ten years. His female foil is Maud Adams who had also been featured in The Man With the Golden Gun.

A review by James Berardinelli summarizes some of the highlights (or not) of the film: "The film moves from Cuba to India to Germany. The most foolish elements of the film include a bizarre chase through the streets of New Delhi, Bond doing a Tarzan imitation, and an attack by circus performers on the villain's hideout. 007 has a variety of disguises here, including a mechanical crocodile, a gorilla suit, and a clown costume. Octopussy has its funny moments, but there are a few too many times when we're laughing at the movie rather than with it."

Octopussy does have a few moments for Jeep fans. The first chase scene begins with the "Cuban" army leaping into Jeeps including this M38A1, to pursue 007's convertible Range Rover.

The chase through the streets of Delhi has the villains in an MB trying to finish off Bond and his fellow agent Vijay, who are in a souped-up minicab.

There's also the scene in which Bond is chased through the brush by hunters on elephants, as villain Khamal Khan (played by Louis Jordan) says, "Mr. Bond is indeed of a very rare breed... soon to be made extinct." The scene begins when 007 makes his escape from Khamal's castle, hiding inside a body bag on the back of a Mahindra CJ-3B driven by Khamal's henchmen. When Roger Moore suddenly emerges from the body bag (20K JPEG), frightening the henchmen, we get a glimpse of the twin spare tires on the back of the Mahindra.

The British magazine James Bond Car Collection issued a small diecast model of this Jeep in 2008.

Berardinelli says, "Ultimately, it's the extravagant stunts and chases that save Octopussy from the scrap heap. The pre-credits episode features a stunning race between a 12-foot long jet and a heat-seeking missile. Later in the film, there's a pulse-pounding chase-and-battle sequence that takes place on the roof of a moving train. The climactic struggle manages to top that, transpiring on a plane in flight."

Thanks to Ed Freniere for spotting the CJ-3Bs in the Bond films, and thanks to the Internet Movie Cars Database for the frame enlargements. -- Derek Redmond

Also on CJ3B.info, see more Mahindra Jeeps, some with no spare tires at all.