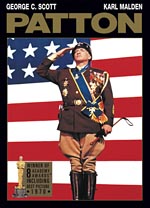 I've never forgotten a family friend from my childhood, whose enjoyment of the movie Lawrence of Arabia was spoiled because Peter O'Toole was riding the wrong kind of motorcycle when he was killed at the end.

The cameo appearance of a Jeep CJ-3B (1953-65) in France shortly after D-Day, 1944, in the movie Patton, might easily have had the same effect on me. But I always get caught up in a movie with the scope and history of this one.

If anything was going to put me off, it would probably be the performance of George C. Scott. I believe he won an Oscar at the time, but he seems a bit over-the-top now. He's seen in the photo in the high-hood (complete with booby-trap-wire cutter), in a scene which also features an M38 (1950-52).

Patton is a well-made movie dealing with exciting, important events, but I can't give it more than three stars out of five (the same as the General has on his time-travelling Jeep). 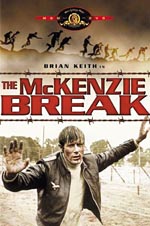 Another 1970 movie with a CJ-3B filling in for a WWII jeep is The McKenzie Break. Adapted from Sidney Shelley's novel about German POW's attempting to break out of a prison camp in Scotland, the unusual film stars Brian Keith as Jack Connor, the Irish intelligence officer sent to bring the camp under control. 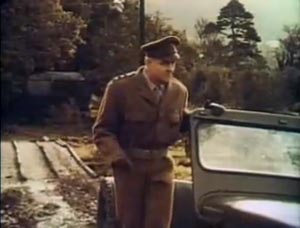 Jim Musgrove saw the film recently, and comments, "In the movie Brian Keith rides up to the prison where Germans are being held, in a very plain Jane, olive drab-painted CJ-3B. Sans even windshield wipers, the Jeep appears several times in the movie as a poor stand in for what should probably have been a early MB or even a lend lease MA."

The inaccurate Jeep has not gone unnoticed elsewhere -- it is even mentioned by the Internet Movie Database in the "Goofs" section of their entry for the film. 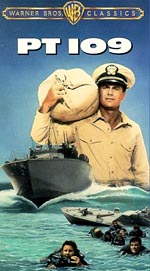 Cliff Robertson (50K JPEG) who died on 10 September 2011, had one of his first starring roles playing the young Lt. John F. Kennedy in PT 109, released only months before President Kennedy's assassination in 1963. According to imdb.com, Peter Fonda was considered for the role, but Robertson was the choice of Kennedy himself.

The film recounts the famous events of 1943 in the Solomon Islands, where the young skipper takes over the battered US Navy patrol torpedo boat PT 109, which is later rammed and sunk by a Japanese destroyer. Kennedy and his surviving crew members manage to swim to an island and are eventually rescued.

Again, PT 109 is a film with inaccuracies; the boat is painted grey rather than the original dark green, and is longer than the WWII PT's built by Elco. (Interestingly, the process in which Elco got the principal contract to build PT boats for the Navy had some similarities to the story of the Army contracts for the Willys MB and Ford GPW -- see PT Boats at Wikipedia.) 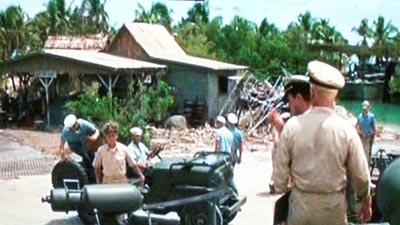 Early in the film, Commander C.R. Ritchie (James Gregory) arrives dockside to inspect PT 109, in a jeep played by a CJ-3B. Aside from the olive drab paint job, the only military feature added to the 3B is a pair of unusual blackout covers over the headlights, also seen in another sequence on a CJ-3A painted in Navy grey (50K JPEG). These covers might suggest the vehicles were obtained at an overseas location, but in fact the film was shot at the Warner Brothers Studio in California, and on location in Florida. 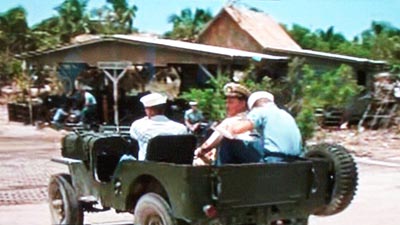 When Cmdr. Richie leaves a few minutes later, we get a good look at the back of the 3B, with a sailor perched on the rear fender well.

So once again the authenticity of a big-budget film is weakened for some of us by sloppy acquisition of prop vehicles. But let's face it; for most people a Jeep is a jeep is a jeep. And it's easy to ignore these details when Cliff Robertson is onscreen as JFK, just as with George C. Scott as Patton, or Peter O'Toole as Lawrence of Arabia.

By the way, there is a long list of other factual errors in the film at imdb.com.

Thanks to Don Norris, Federico Cavedo and Larry Imas, who all spotted the 3B in PT109. -- Derek Redmond

See also a Patton Jeep toy as part of a New Idea for Matchbox: "The CJ3B Page Collection".