Another CJ-3B in the Movies: 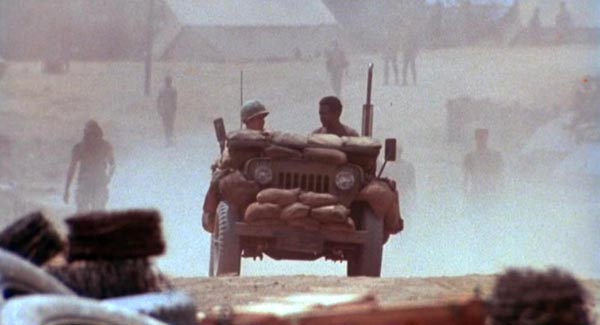 Private Chris Taylor: "Well, here I am, anonymous all right. With guys nobody really cares about. They come from the end of the line, most of 'em. Small towns you never heard of: Pulaski, Tennessee; Brandon, Mississippi; Pork Van, Utah; Wampum, Pennsylvania. Two years high school's about it, maybe if they're lucky a job waiting for them back at a factory, but most of 'em got nothing.

"They're poor, they're the unwanted, yet they're fighting for our society and our freedom. It's weird, isn't it? They're the bottom of the barrel and they know it. Maybe that's why they call themselves grunts, cause a grunt can take it, can take anything. They're the best I've ever seen, Grandma. The heart and soul."

That's some of the narration from Platoon, written and directed by Oliver Stone. Pvt. Chris Taylor, seen in these stills catching a ride in a Mitsubishi CJ3B-J4 Jeep, is played by Charlie Sheen.

The film was shot in 1986 in the Philippines where there are plenty of vintage Jeeps available. With protective sandbags wrapping the front of this one, only the headlight guards and the rectangular mirrors identify the Jeep as likely a Mitsu J4. An unusual feature is the exhaust snorkel in the rear. (See CJ3B-J4 Military Jeeps in Vietnam for more photos including steel protective armor.) 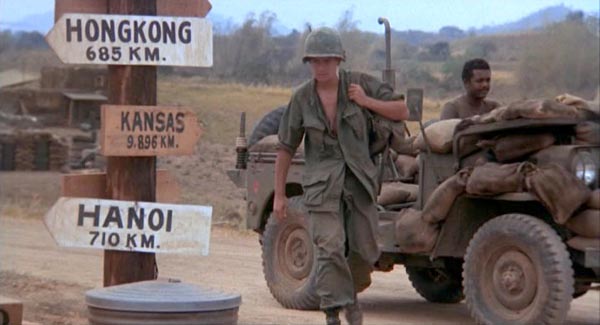 Phil Arthur writes in the Internet Movie Database: "Platoon is a very personal film for Stone, as he experienced the horror of the Vietnam War firsthand when he landed in Vietnam in 1967 and served with the second platoon of Bravo Company for 15 months. During his time in Vietnam he was awarded the Bronze Star and the Purple Heart.

"Platoon, which was originally written in 1976, was to tell the story of the Vietnam War like never before. With a talented and dark cast, which included Charlie Sheen, Willem Dafoe and Tom Berenger, Platoon was hailed as one of the greatest films made about the Vietnam War. It won Stone his first Academy Award for Best Director, as well as Picture of the Year.

"The story centers around Chris Taylor (Charlie Sheen), a middle class college dropout who enlists and ships out to Vietnam. He finds himself on the front line, and the audience experiences the hell that is war through his eyes. The Platoon Taylor enlisted in finds itself divided; on one side is Sergeant Barnes (Tom Berenger), a morally corrupt killing machine, hell bent on murder, offering the men a straightforward solution to the problems of war. On the other is Sergeant Elias (Willem Dafoe), as much a killing machine as Barnes but who retains some semblance of humanity and attempts to impose a level of compassion and responsibility on his men. Taylor finds himself between these two men and their personal war, and describes it as a 'battle for the possession of my soul'.

"Platoon is one of the best war films ever made. Stone brings all aspects of war to this film and draws on his first hand experience of the Vietnam War to convey the sheer emotion and horror of war. "

Thanks to Misha in Belgrade for spotting the Jeep and grabbing the stills, and Phil for the review. -- Derek Redmond

Also on CJ3B.info, see a CJ-3B in Good Morning Vietnam.