The Worst Car in the World?

Top Gear is a long-running BBC-TV series in Britain (see Wikipedia) which has now also been adapted into versions produced in the United States and other countries. An episode produced for the BBC in 2013 called "The Worst Car in the History of the World" features co-hosts Jeremy Clarkson and James May slagging a variety of vehicles in their usual very British and drily humorous style. 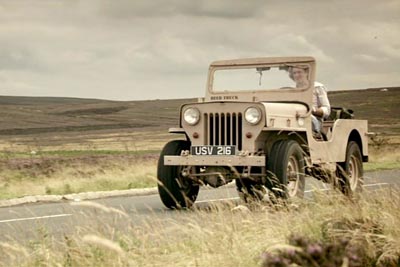 James May (right) proposes the Mahindra CJ-540 Jeep, built in India, as a prime candidate for the title.

The Jeep used on the show is John Carroll's "Beer Truck" (see CJ3Bs in the Sand on CJ3B.info) which is actually an assembly of parts from various Jeeps, on a Mahindra body tub and drivetrain. John says it's called the Beer Truck "because that's what we'd been drinking when we decided to save the derelict truck from a farm in Scotland, rather than use it for spares."

The Top Gear team didn't even bother to remove the "Beer Truck" name painted on the windscreen. 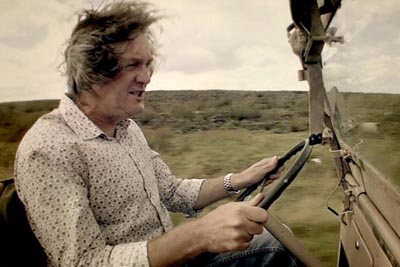 After Jeremy Clarkson first suggests the Polish-built FSO Polonez as the worst car, James introduces the Mahindra as a contender, and takes it for a spin. He complains about the loose steering wheel (which is actually a repro MB item stuck on by John.) 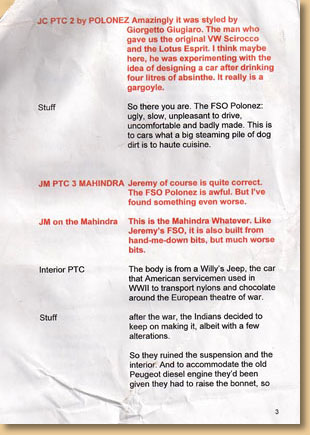 Here's a peek at page 3 of the show's original script, which unfortunately gives the impression that it was an Indian idea to raise the Jeep's hood to accomodate a larger engine.

See also page 2 (80K JPEG) if you want to enjoy more of Jeremy's comments on the FSO Polonez. 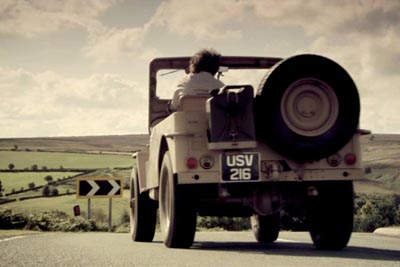 There are some very scenic shots as James drives the Mahindra through the countryside, apparently in Yorkshire. He's very funny, although it's too bad that his comments also perpetuate the fairly common British misconception that all post-WWII Jeeps, and particularly high-hood models, were built by Mahindra in India. 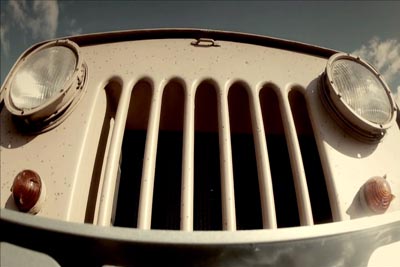 Here's a unique shot of the Mahindra's front grille, illustrating James' observation that the high hood looks as if the Jeep received a "massive wedgie." 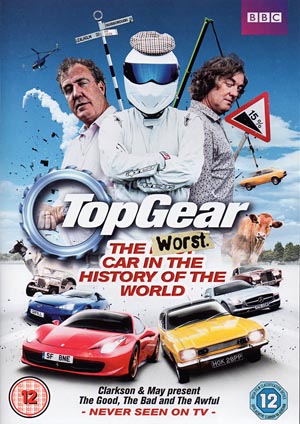 The Beer Truck is left-hand drive, having been given a Willys CJ-2A steering box. However, the photo of the Jeep (40K JPEG) seen here in the background on the DVD cover, is reversed, making it appear to be RHD. And it's not just a careless mistake; the license plate is carefully Photoshopped in place, the right way around. 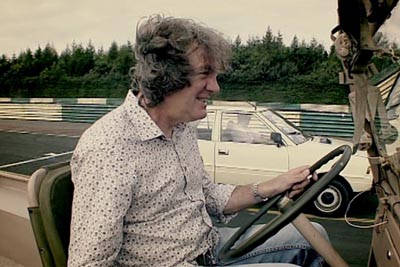 For some reason, the Top Gear bunch decide that a quarter-mile drag race between the Jeep and the FSO Polonez, which is a Polish version of an Italian Fiat, would be a good way to decide which of the two is the worst. 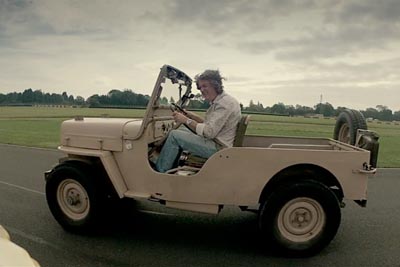 The race is a slow, painful event. James smirks in the Beer Truck as the gearshift knob of the Polonez comes off in Jeremy's hand. 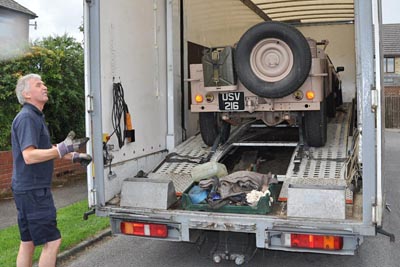 John Carroll is the editor of Classic Land Rover magazine, and the author of the Haynes Classics book Jeep. He took this photo of the Top Gear crew returning his Beer Truck in a car transporter after the shooting was completed. 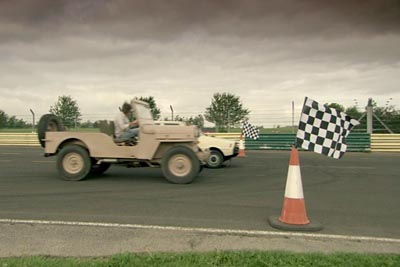 The Mahindra in fact barely kept up with the Polonez in the drag race, which may well be the first time anybody thought about putting a diesel flatfender Jeep to this kind of test. 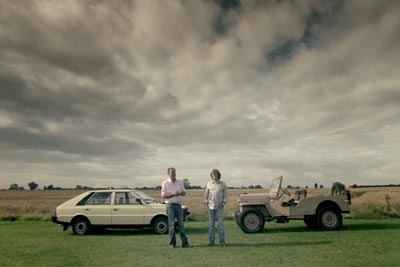 Jeremy and James then admit that both of these vehicles were designed to be inexpensive, so you couldn't expect too much. They agree that it would be more fun to expose cars that are both expensive and terrible, and they launch into an hour of hilarious comparisons of great and not-so-great cars. Mostly European sports cars, with the usual fantastic video footage of them screaming around test tracks. I think the only American cars that get a glance are a Lincoln Continental and a Buick Lesabre, good for a few laughs as they lumber through an agility course.

Thanks to BBC for the frames from the show, and John Carroll for giving us the inside scoop. -- Derek Redmond

See a preview of the Top Gear "Worst Car in the History of the World" episode on YouTube.