This page is Part 1 of Jack Ahlberg's 1999 start-to-finish description of his project. See also:
Part 2: The Body
Part 3: The Engine and the Final Touches
Part 4: The Hardtop

This Jeep belonged to my deceased father, who had purchased it in 1968 for $750.00. I don't know the history of the Jeep prior to that time. He kept it on his farm in Illinois and used it to roam through the timber and river bottoms on his land. Mother would drive it to town and would often take the grandchildren for a ride. The kids referred to the Jeep as "The Old Green Goose".

The restoration was my first project after retiring. The first thing that I bought was a Service Manual which I read from cover to cover -- the schematics and narratives were very accurate and informative. The other tool which was indispensable was the computer -- I spent hours of time on the Internet and chatted with a lot of very helpful individuals. The CJ3B Page assisted me with answers to questions about the Jeep, and the location of parts from all across the nation. I thank all who assisted me with my project, and a special thanks to Jon Rogers in Australia for locating some parts and for words of encouragement.

I hope you enjoy the pictures and would be happy to hear from you with any question or comments. 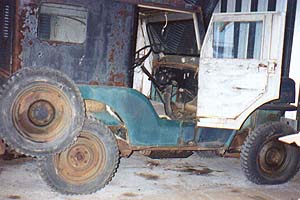 This is the Jeep as I found it at Dad's farm. I pushed it into the machine shed after pumping up four flat tires. The mileage was at only 36,000 -- the Jeep hadn't been started in years, but with a new battery and a little coaxing it started. Gas leaked from several places due to the fact that Dad had fixed a temporary 5 gallon can as a substitute tank after he had buried the Jeep in the river for a week and the tank became clogged with mud and water.

I found that the brake system was out of working order. The brake lines had rusted through in several places. My first drive in the old Jeep came to an abrupt end when I hit an oak tree with the front bumper to keep from going over a ravine when I could not get it to stop. It was either that or bail out, but I couldn't get out! 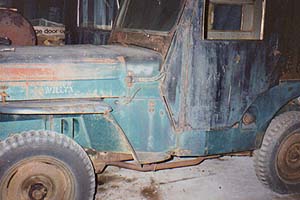 This shot shows the the driver's side. Rust damage from years of neglect is evident, but there were only three bolts which broke during disassembly, which I consider very good considering they are all originals. I made a new wiring harness since I was not able to find a replacement, and decided to go to a 12-volt system for more convenience. I kept the all-metal cab which was on the Jeep, but have not yet attempted any restoration of this component. 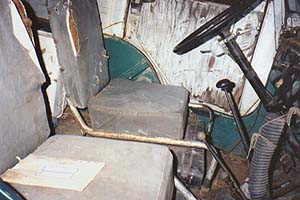 An interior picture of what I had to look forward to in days to come. Note the original horse hair padding in the seats, which I was able to retain for the new seat covering. Dad had engineered his own method of keeping warm, as you can see from the 3-inch flex hose appropriately secured with a piece of rope. 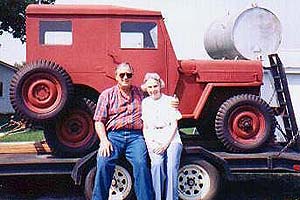 In this photo, the Jeep was ready for departure to Georgia from its home in Illinois, where my Mother drove the old Jeep frequently and had fun in it. The Jeep had not been running for the past 10 years and had been sitting outside in the elements. My wife's uncle Don Dively got the Jeep running and had it sandblasted and primed. But as you will soon see, I did a complete tear down. 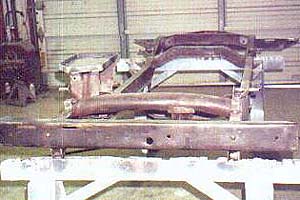 After many days, the frame was ready for priming and final painting. The frame was not bent, and after a good going over with a disk sander/brush and sand blasting, I was pleased with the outcome 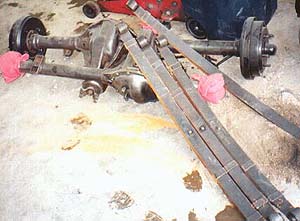 Here are the springs, and front and rear differentials. The springs were full of sand and mud. There were two of the spring clips missing. New bushings and bolts replaced the old.

Thanks to Jack for this 1999 look at his restoration project. As of 2018 the Jeep has been sold. -- Derek Redmond

Continue to Part 2: The Body.