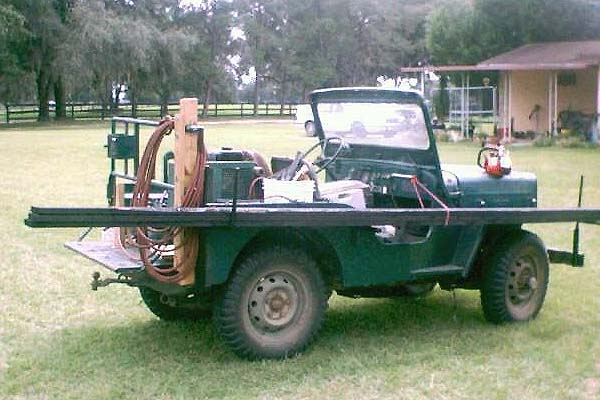 Frank Armanno writes from Florida, "I thought you might like to see my CJ-3B getting ready to do some fence work on the back forty. It's been working for the last fifteen years, and I keep saying I'm going to restore it. But as time goes on and I get older, I never get it done and I don't think I ever will. It has been like having two helpers who never complain it's too hot or it's too cold -- it just stays ready day or night, and never lets me down.

"I've had my Jeep since about 1985; I found it in the woods in a hunting camp in Georgia. From what I was told, it had no brakes and they stopped it by turning it off, leaving it in gear, and heading it into some bushes and jumping. Well the last time it went through the bushes and down a hill and ended up in a creek. It was under water so only the tail gate was showing, and it was in late December, and cold, so they left it there until sometime in the spring. When they finally got around to pulling it out, the engine was froze up, and they pushed it into the woods where I found it. They told me it was there for two or three years. I asked what they were going to do with it, and was told if I wanted it, I could have it, so I took it and towed it to Florida.

"I am not much of a mechanic, and I couldn't find anyone that would work on it. They all said they couldn't find parts for it, and I should try to put a new engine in it. I thought about it for a while and decided to try to free the old one up. I poured WD40 in all the cylinders every time I thought about it for about two years, and would try to turn it over by hand now and then. Well, one day I got it to move a little and then went at it with gusto. After about a month of pulling, banging, and a lot of cussing, I got it to go all the way around.

"The gas tank was rusted out, so with a one-gallon gas can tied to the windshield, a friend and I pulled it all over the place trying to get it to start. I had put new plugs and points in it, and guessed at the settings. Anyway one day it backfired, and I think that was when it broke a shaft in the transmission. I found one in Fort McCoy, Florida, put it in, and it worked. About a month later, after many more miles of towing, it started running -- not good, but it ran none the less. I couldn't start it with the six-volt that was in it so I went to twelve volts and it started, most of the time. It smoked so bad I would only run it at night so no one would see all the smoke, but after a while it got better and better. Now it will smoke every now and then, but most of the time it runs good. Never took the head off. 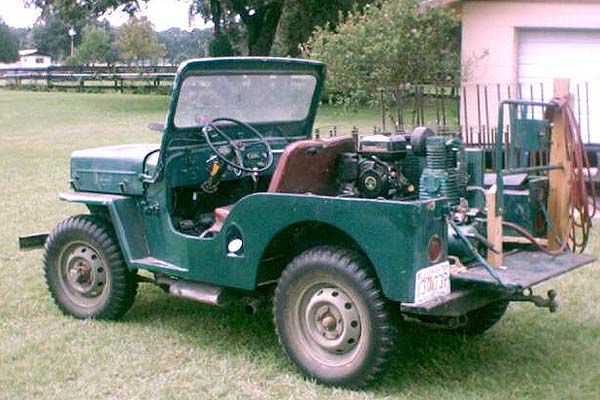 "The wheels are what were on it when I got it, and I found wheel cylinders for the rear wheels, so I have rear brakes. It also had a hard top, which I took off, and I put new glass in the windshield and did a lot of body work on it -- not the best, but as good as I could do. I had to find seats, and got a gas tank from J.C. Whitney. Other than that, as far as I know, it is all original." 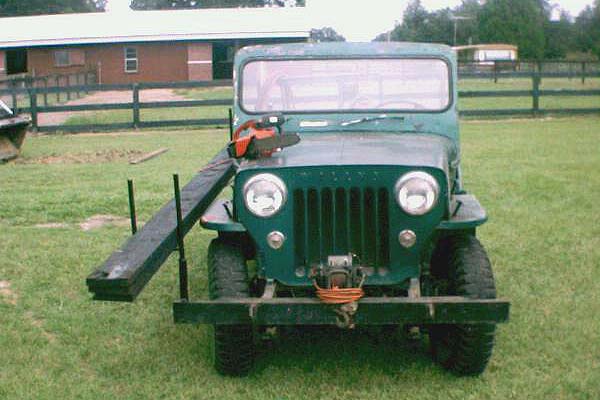 "I use it three or four times a week to fix fences -- we raise Thoroughbreds and Arabians on our horse farm. I have an air compressor in the back, I made brackets to hold the fence boards, and I use the winch to stretch fence wire and move whatever needs to be moved."

"It's my buddy and we go to work together. We're both old and cranky so we make a good team. Thanks to CJ3B.info, and the great people that write in to the Bulletin Board, I have found out that I can get almost anything that I need, and maybe some day I will try to rebuild the engine -- maybe." -- Frank Armanno

Thanks to Frank for the photos and the great Jeep story. -- Derek Redmond