Michael is in Saltillo MS, and has begun restoration of a Jeep with an interesting but somewhat mysterious history. We hope someone who reads this article might be able to help provide some clues. -- Derek Redmond 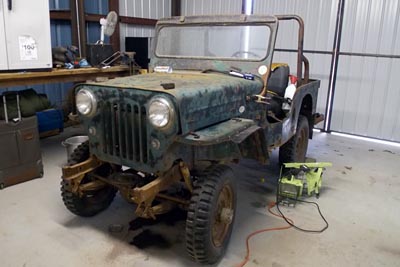 A couple of weeks after bringing it home in late 2014, Michael told CJ3B.info, "It is in relatively good shape, with most parts in place. The bumper was off when I got it. It has been sitting in storage for several years in Cleveland MS. I got it from a guy who bought it for scrap, and saved it from the salvage yard. My plans are to restore as much as I can." 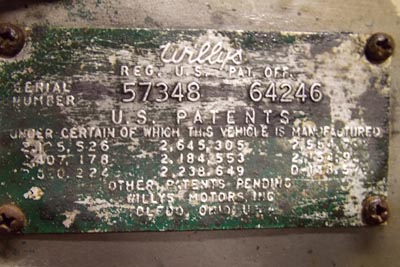 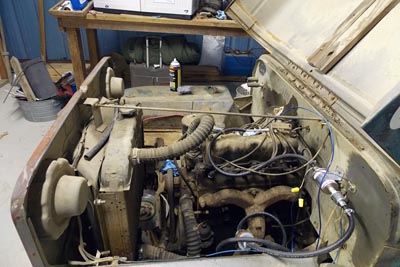 "It had a new gas line and battery, and the guy had tried to crank it. I hauled it home and put in a fuel pump, new points, plugs, rotor, plug wires and carburetor. Cranked and runs fairly well. About 50 pounds of oil pressure, no leaks, good temp. The timing advance seems to be locked, and I plan to replace the distributor. It is stuck in 4-wheel drive." 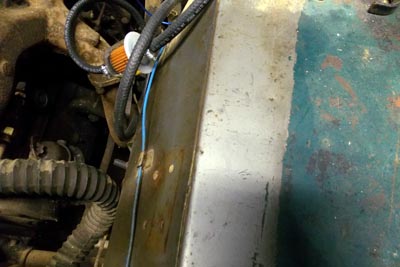 According to Michael, the Jeep had previously been used at a hunting club on the Mississippi River, which would account for the camo-style paint job. But he was puzzled by the paint underneath: "The photo of the fender weld shows what appears to be the original paint. It looks like gray or silver."

Well, I would guess the original color to be Willys Amber Poly, a slightly warm metallic gray similar to the background of this page -- see a scan of an original paint chip in Willys Paint Samples 1959-65. (Metallic paint can be difficult to reproduce as a plain RGB color, so some online paint charts show it looking more brown than it actually was.) This is a color rarely seen on a CJ-3B. 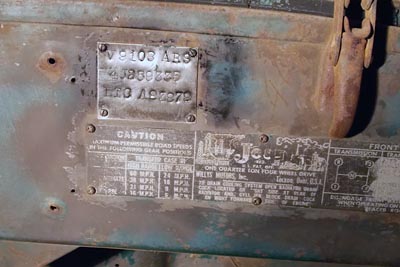 If the unusual color isn't enough to make you look at this Jeep more closely, Michael mentions the hand-stamped plate on the dashboard: "It has several numbers which look like possible military type numbering. This Jeep has been just down the road from an old air base that closed in 1965 but was still in use by the City of Greenville as a public airport facility. A lot of surplus would have been disposed of at the closing. Donaldson Point Hunting Club is just a few miles north of the old airbase location. I feel the dash plate suggests some government entity."

It's certainly not the normal U.S. government plate, although other screw holes on the dash appear to possibly fit the standard nomenclature plate (110K JPEG). 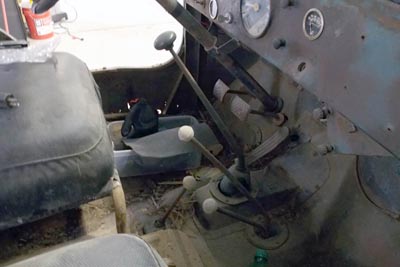 The proximity of Greenville Air Force Base, a training facility about 35 miles south of Cleveland MS from 1940 to 1965, is an intriguing factor in the possible origins of the Jeep, although Amber Poly doesn't seem like a military color.

But other government agencies such as the Dept. of Agriculture did use CJ-3Bs (see Ezra Taft Benson in the LIFE Archive on CJ3B.info.) The fact that this Jeep has a rear PTO (note the control lever in the floor) also makes DOA seem more likely than USAF. 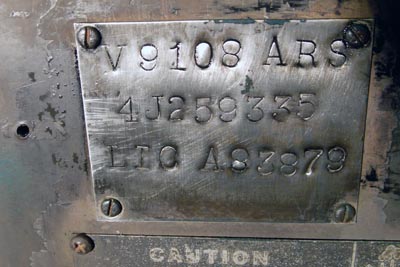 "ARS" as seen in the top line could conceivably stand for Agricultural Research Service, a large branch of the DOA.

The middle number on the plate appears to be the Willys F-head engine number. According to the list of Surviving CJ-3B Jeeps on CJ3B.info, engine number 4J259335 would be in the correct range for a Jeep built in 1960.

The bottom number is prefaced with "LIC", but A83879 is not typical of Mississippi license plates of 1960 or 61, which usually had six digits and no letters. Later in the 1960s there were Mississippi plates beginning with a letter.

Eric Lawson commented on The CJ3B Bulletin Board: "Could LIC A83879 be the license plate number combination for the white-with-blue-characters US government license plate?The letter A, followed by 5 digits is the correct pattern for a US Dept. of Agriculture vehicle for the mid- to late-1960s."

Michael responded, "That makes sense. That location is right in the middle of the Mississippi/Arkansas Delta. Just like the airfield there is a USDA/Mississippi State University Ag Experiment Facility. So would that be Amber Poly or GSA Gray color? I will pursue the USDA for any info in that area." 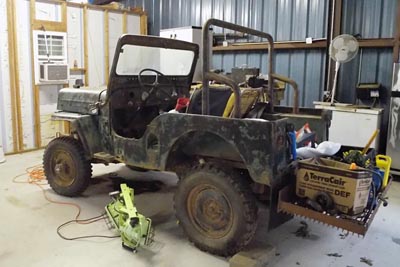 In addition to a roll bar, a large rear cargo rack has been added to the Jeep. Michael says, "I am sure it was used to haul the deer kill to camp. It is very sturdy.

"I plan on pretty much a long off-frame restoration. My first granddaughter was born in September 2014, Ava Lilly. I plan on teaching her how to drive in her Jeep, a 1960 CJ-3B."

In summer 2015 he added, "I got the 3B running and most everything is pretty good considering. I put in an electronic distributor and worked great. However my Kubota Side by Side has been in the shop most of the summer. I switched over to the 3B for the pasture run around. I have been using it to spray fences and and farm work. It is a blast to drive and it runs really good. I know I need to tear it down and rebuild it but I can't seem to give it up." 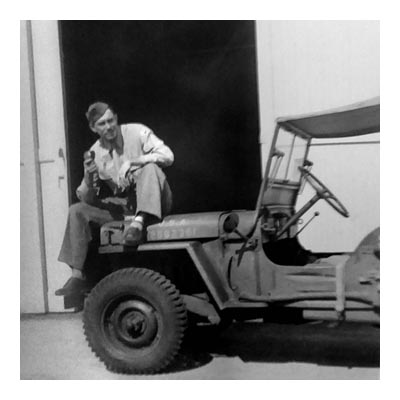 "My sister discovered this old photo. That is my Father sitting on a Willys during his service in WWII. We had never laid eyes on it until she came across it. Appears to be prior to D-Day deployment. It appears he is eating a apple. I knew I like Jeeps for some reason!" 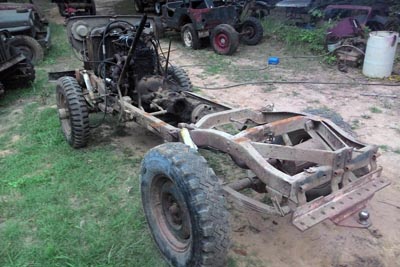 In 2016 Michael said he was finally getting the project started, and sent photos of the tear down (220K JPEG) and the rolling chassis.

He wrote, "We are in rebuild process of the 3B. The rail numbers matched the last five of VIN so looks like we got all matching numbers. Got rails blasted and powder coated for $245 very good price. See before (250K JPEG) and after (230K JPEG) rail photos with new rear cross member. 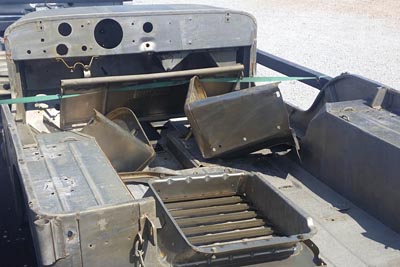 "We did a vat dip rust and paint removal for the entire body and extra parts. Did not realize til I checked around, that I have a local chemical dip operation. That is a real good way to start on a body. I could have got the entire body dipped for $175 but I added some additional parts I needed cleaned for some other projects for $400. A real bargain." 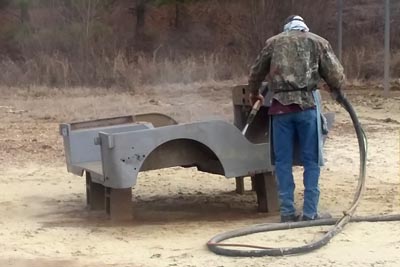 "At a very old snail's pace we are getting there. Sometimes taking it slow is a good thing. I kinda drug my feet after the chemical dip, and realized it was more body work than my abilities could handle. I had got a rust haze on it. I had a guy that does the Dustless Blasting process and he did the frame and powder coated it, and it turned out great. So I took the tub by and he did it.

The process is with water and crushed glass. Turns out that is the ultimate way to do one. Dip it and then the blasting washes and cleans it to new metal, just right for a good self-etching or epoxy primer.

The cost compared to hours by hand is way cheaper. Wish I had done all of it this way, but I had already primed fenders, hood, tailgate and grill. If all my figures are correct, I have less than $900 in the dip of the entire 3B and additional parts, blast/powder coat frame, blast tub. Not bad."

Thanks to Michael for the information and photos. -- Derek Redmond