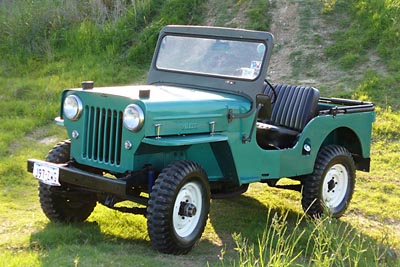 I have always had a fascination with the flatfenders, you know the old WWII movies, and the TV show The Rat Patrol (120K JPEG). I always dreamed of one day owning one. In high school a girl that lived a couple of houses down had a yellow CJ-5 that just added fuel to the Jeep fire, and I dreamed of waking up and there would be a new CJ in the driveway. Nothing fancy mind you, just a stock CJ was all I wanted. The freedom of no top, no doors, and cruising down the street or back country roads kept pulling on me. 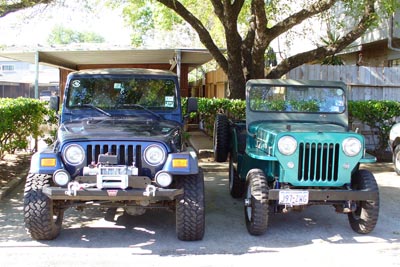 Well, several cars have come and gone, a '74 AMC Gremlin, '79 280Z, and a '90 Bronco II. I had to wait until 1993 for my first Jeep -- a YJ. It was as close to a flatty as I would get for the time being. I sold that YJ in 2002 and vowed to get Jeeps out of my system once and for all. That lasted about 2 months and then my wife and I bought our '02 TJ -- that's the big blue one in the photo. I would love to take credit for how good that one looks but my wife Tammy added the lift, the tires and the exhaust. She loves driving that Jeep. All I did was put on the front bumper, rear tire carrier and the winch. 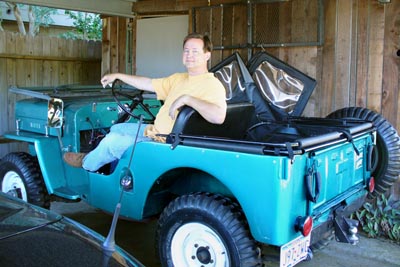 I still had the flatfender itch, bad. Then I met Larry Steed, and boy was I in trouble! Larry introduced me to the 3B. I can honestly say I was always wanting a 3A, and I never really looked at the 3B's til one day I was able to stand next to one, and that was all she wrote. It has an appeal that takes a serious, die hard Jeeper to love.

In September of '06 Larry passed the '64 on to me, in just about the condition you see it. I changed the fluids, did some minor brake adjustments right after I took her home, but that was it. My intent on obtaining a flatfender was to keep it stock, way old school, just like I dreamed of as a kid. To me that is what this Jeep is all about, the classic look and feel (see the engine, 190K JPEG.) 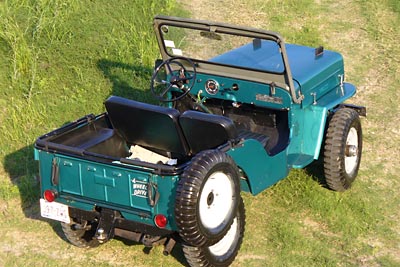 I added bed liner to the rear deck first, then to the rest of the interior (120K JPEG), mostly for protection from rain and such as the top stays off most of the time. I feel like I have some sort of stewardship with this old Jeep. To keep her in as good condition as I can, as close to original as I can until she is passed on to someone else.

For the future I plan on a paint job and to have that annoying leak taken care of. I have added the NDT tires -- I was able to obtain some original K-H rims with 7 x 15 NDT's. That to me is the ultimate classic look! The dashboard (140K JPEG) will stay as it is, just the big speedo! 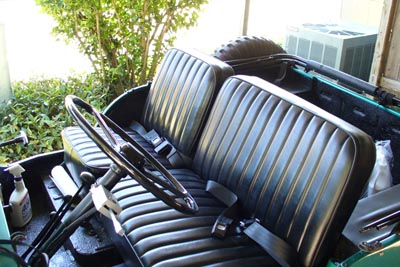 This particular 3B has the bench seat, 60/40 I think it is called. From what I can tell and have been told this is a rare option. Larry said he fabricated the door side mount (120K JPEG) for the seat -- dang good job as it looks original to me. I removed the passenger seat (120K JPEG) in one of the photos to show some detail. The stitching appears to be in good order with large staples along the back of the seat (120K JPEG).

I also have the rubber plugs for the side drain outlets (90K JPEG). And this 3B did have a Koening PTO which I have just removed. I know, sacrilege, but I just did not want it there, and I would never use it. It did not go to waste, as Jamie Powers now has it for his '63 3B. 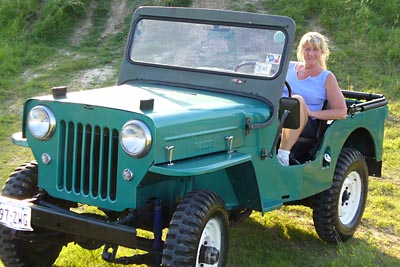 My lovely wife enjoys the open top as much as I do. Tammy has taken the time to learn to drive the Willys, but she will not give up her '07 Miata!

I plan on keeping the 3B as original, or original looking, as I can. Whenever I drive it, everyone just kind of stops and stares, like "What is that?" Or some of the older guys will get a little misty eyed when they start to reminisce about their old Jeeps!

I'm lucky because in buying this 3B I also made some new friends, Larry and Candy Steed. I feel that I was in the right place at the right time. That man is always ready to help me out or answer any questions I have! Also I am finding out the 3B's are not too common, so I and a couple of other owners are starting up an informal flatfender group in Houston. That way we will have a network and can check out the other rides.

See two CJ-3Bs (190K JPEG) at the first gathering of the Houston Area Flat Fenders Group. We had a good lunch at Prince's Hamburgers (Houston tradition) and then snuck off to a secluded area to check out the four wheel drive on both Jeeps while our wives looked on with patience. Jamie's wrapped CJ looks great up close, but of course I think my Green Monster is the bomb! -- Steve

Thanks to Steve and Tammy for the 2008 photos and the story of the flatfender itch. They did end up passing the Jeep along to someone else -- it was sold in early 2011. -- Derek Redmond

See Steve commuting to work in the 3B when it was his Daily Driver.