Micky Fleming in British Columbia, Canada has one of the first CJ-3Bs built by Kaiser-Willys in Windsor, Canada, in December 1959. It was purchased new by her grandfather, Jake Reimer, for use on the family farm near Millarville, Alberta. Micky has agreed to share some wonderful family photos from the early 1960s showing the Jeep in the Kananaskis Mountains near the farm.

Micky says, "My grandparents bought what I have learned to be a 1960 CJ-3B new for use on the farm. When my grandparents passed away, the Jeep went to my aunt and uncle who lived at the home place." 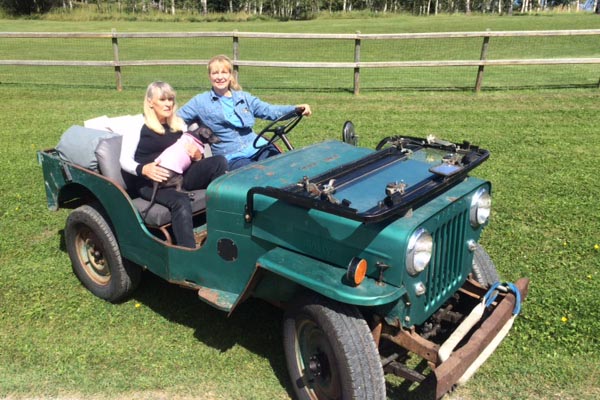 Here's Micky in 2016, driving the Jeep for the first time in many years, with her mother, Barbara Bernice Reimer. She says, "My uncle just passed away and I am now the proud owner of the Jeep that has been in the family since new. It has about 14,000 miles on it and has been barn kept, but has seen lots of use fencing, haying, skidding, sawing and grinding grain. The front left fender was damaged where my Granny got too close to a tree." 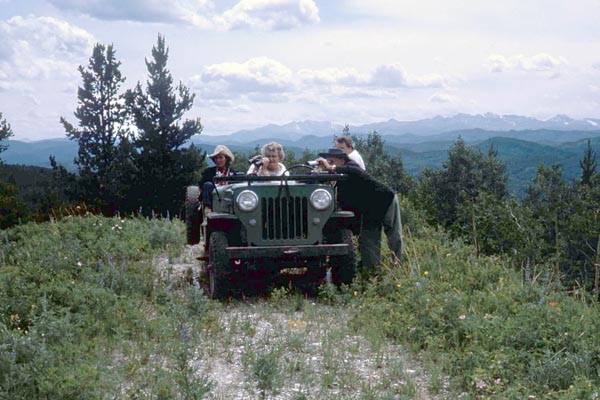 "My granddad, Jake Reimer, used to guide visitors up into the Kananaskis region of the Rocky Mountains for hunting and sightseeing. He's the fellow in black with the telescope in this 1963 photo. My grandmother, Barb Reimer, is the woman in the cowboy hat. This is from the top of Boot Hill looking west. This was a quarter mile from my grandparents' homestead (in those days 55 miles southwest of Calgary)." 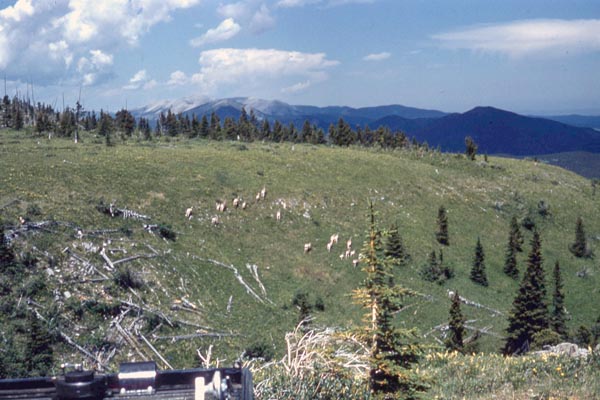 This shot taken over the open windshield shows a herd of bighorn sheep on the opposite slope. 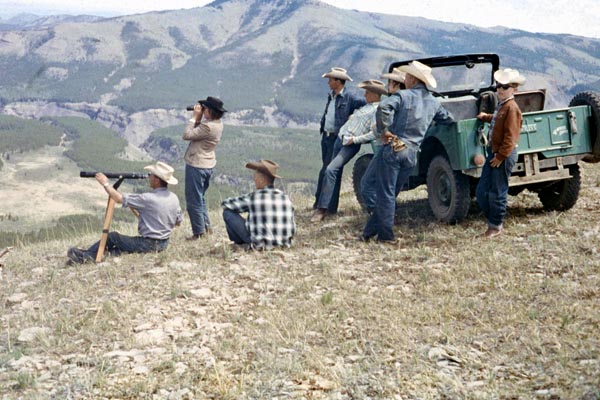 Micky also found a nice picture of a group of Stetsons spotting sheep from the Jeep in the Kananaskis, west of the Reimer ranch. 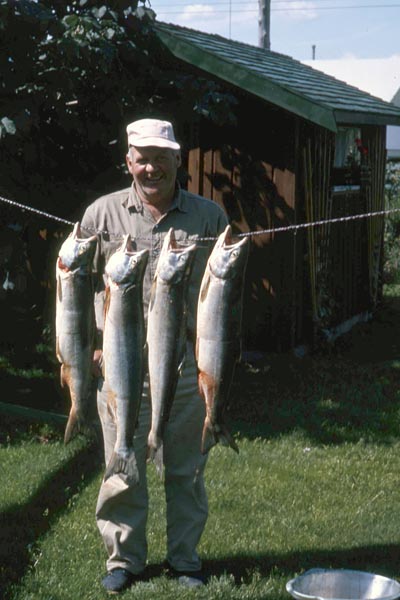 Micky says, "Here's my granddad Jake after a day of fishing in 1963. He bought the Jeep new in 1960, and I found out this past weekend that it was my Granddad's third Jeep. I'm not sure where he bought it. It was brought home to the ranch at Millarville, Alberta, where it stayed until I brought it to Vancouver Island this past weekend."

"One time we had a huge grizzly that was killing cattle at farms close to the home place. Granddad and a few guys were up in the hills hunting it, but it had circled back to the farm. One night two heifers came barreling home from the quarter section to the south. They went right through two barb wire fences. They were pretty cut up from the barb wire and their hind quarters pretty sliced up from the bear. Well they were standing at the back door of the house bawling for my grandmother. Gram took them to the barn, stopped the bleeding with axel grease and flour.

"Then Gram came back to the house, picked up the shotgun, loaded it with slugs and drove my little Jeep to the middle of the hayfield where the herd was. She left it running with the headlights on. The rest of the 200 cattle clustered around the Jeep like it was their mom on a cold night. Gram wouldn't let any of us kids take the truck down to pick her up. She walked the quarter mile back to the house. None of us slept that night." 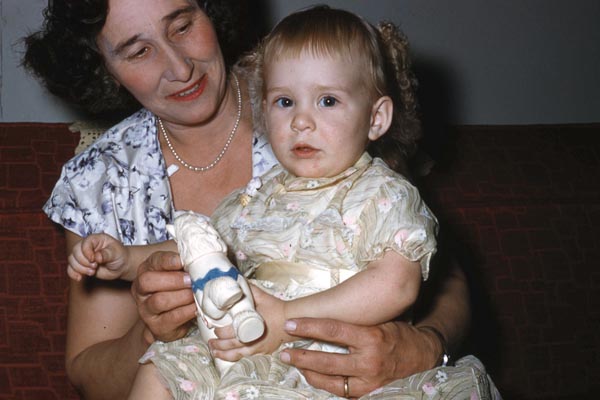 "When Granddad got home a couple of days later, he made it his mission to get that bear. Ken Simpson, a neighbour, and Granddad went back out and Ken shot it a few days after that. It was really smart and ended up hunting them. However, they shot it from up in a tree where it had chased them. They brought it back and skinned it in the Jeep garage. It stunk. It had claws longer than my fingers. I was about 7 or 8 at the time. Granny nursed both heifers back to health."

"And this photo is me and my grandmother a few years earlier." 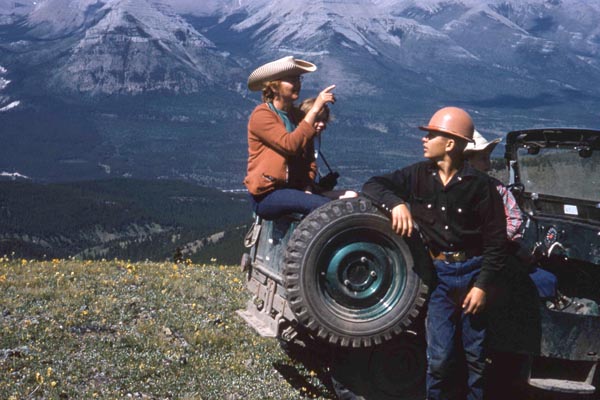 During a tour of the hills in Kananaskis country due west from the farm in 1960, we get a good glimpse of some details of the Jeep, including metallic green rims, Hall taillight, and twin vacuum wipers. Riding in the back is Joan Kendall, schoolteacher at Square Butte School, who taught Micky's mother, Barbara Bernice Reimer. 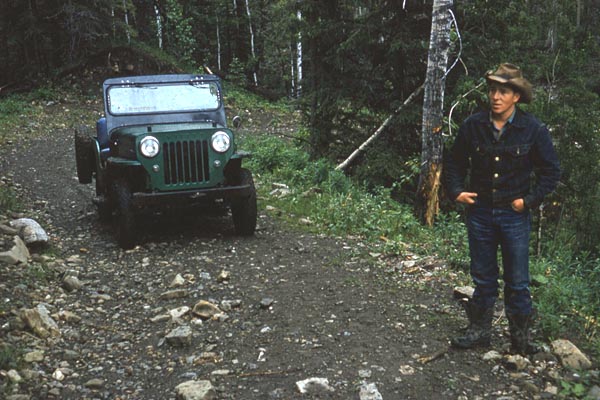 One of Barbara's schoolmates was Johnny Nylund, seen in this 1960 shot of the Jeep at Boot Hill on the ranch. Johnny went on to become head horseman at Banff National Park.

"Granddad used to take his kids to school in the Jeep, picking up other kids along the way. At times he had over a dozen kids in the CJ-3B. Must have been quite the sight. The School District finally told him that if he bought a bus they would pay him. So they went to Chicago and bought a Blue Bird bus." 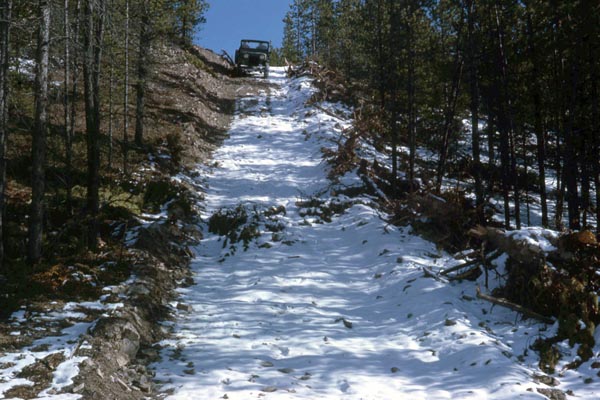 Micky recognizes this photo once again as the Jeep at work on Boot Hill, a quarter mile west of the homestead, in 1962. It's wonderful to have these great color pictures from nearly six decades ago. 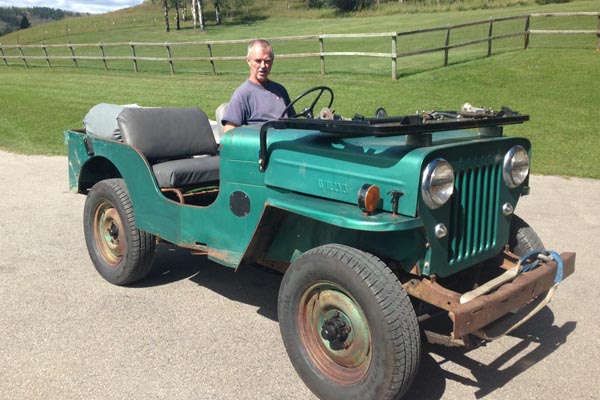 Micky says, "It had been parked for two years. Lots of cobwebs. Dead battery. I towed it to my Mom's place next door to my Aunt's, where my stepdad did the brakes and a mechanical once over. Now everything has been cleaned and serviced and it runs like a top again. Here's my husband Bryan Fleming driving it at the farm.

"The Jeep is a metallic green with the paint being worn off in places from use. It has the original paint. The rims are original and match the colour of the Jeep." 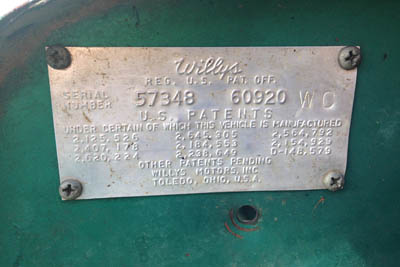 Micky's Jeep has Willys Motors serial no. 57348 60920 WC. According to Kaiser Jeep 1960-67 Serial Numbers, that number would have been assigned in December 1959 in Toledo. I haven't seen a "WC" hand stamped like this before, but it seems likely that it stands for "Windsor, Canada" and was applied when the Jeep was assembled in the Willys plant in Windsor. 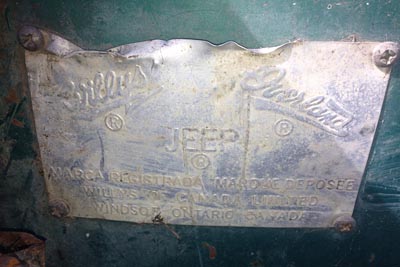 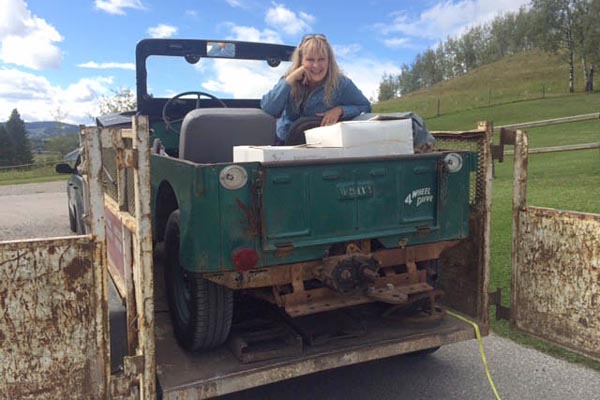 Micky remembers, "I learned to drive on this Jeep many years ago with blocks on the pedals so I could tow the hay rack while the adults threw on the bales."

She has now brought it home with her to British Columbia.

Thanks to Micky (Marilyn) Fleming for the photos. -- Derek Redmond