Hunting in Texas:
A Good Dog and a Late-Model B

Larry Ford of Flower Mound, Texas, is going hunting these days in this 1964 CJ-3B, serial number 57348 117340. When he bought it in early 1999, Larry said, "For the last 20 years, it belonged to a Texas judge; kept in the barn at the ranch and driven when they needed to visit the rough spots and when weather was bad." 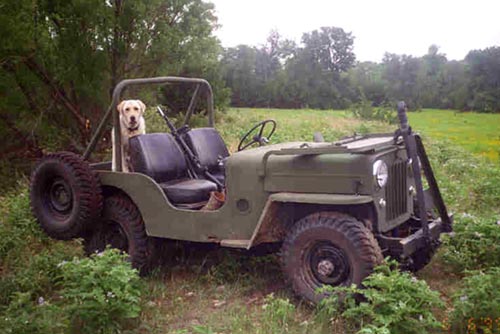 More recently Larry writes, "Today all the dings have been pounded out and/or bondo'd, and it's sporting a new OD green paint job with black undercarriage. I cut the hood blocks too low, and dinged up the hood again; but thanks for the new article on how to do it right!" (See Those Hood Blocks Have a Purpose.)

"I'm an avid bow hunter -- I hunt mostly in Stephens County, about 100 miles West of Dallas. My spot is about 3000 acres of a 15,000 acre ranch. We're part of the Caddo Wildlife Association, which has 180,000 acres under game management working with Texas Parks and Wildlife."

See some photos below, of Larry's Jeep in its earlier orange paint job. See also a left side photo of the Jeep with Cassidy the lab (50K JPEG). 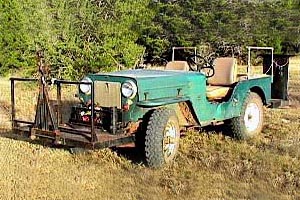 Meanwhile, here's another approach to hunting in a 3B: Chet Couvillon, who lives in New Braunfels, Texas, said, "My grandfather bought this Jeep brand new in '64 or '65. We have been using it for hunting ever since. This Jeep holds many special hunting memories of my grandfather and my dad.

"The front bumper has removable swivel seats for quail hunting -- this way you just follow behind your bird dogs and cover lots of ground. It also serves as a good place to lay your "muy grande" (big buck) on your drive back to camp. The back bumper has a platform with a game feeder attached." (Also on CJ3B.info, see Jamie Powers' updated version of the same approach, on his 1963 CJ-3B.) 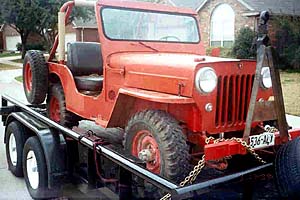 When Larry Ford first brought home the 3B seen at the top of this page, it was painted University of Texas orange (with a Longhorn painted on the tailgate.)

"When I bought it, the judge who sold it to me told me the odometer mileage of 36,967 was correct (to which I politely smiled and shook my head yes). But after our first outing, 200 tough, off-road miles on the deer lease and another 100 on the county roads, I'm a bit more of a believer. It runs like a clock!" 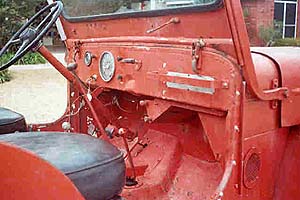 With a soft top on, the heater might come in handy once in a while on a cool Texas night. As a mid-1960s model, this Jeep has the new-style heater featuring more leg clearance, and dual controls for the amount of heat and amount of fresh air from the vent on the right side. 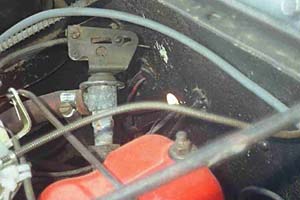 One knob on the heater pulls a cable to operate this valve below the hood, which regulates the amount of coolant flowing through the heater.

Thanks to Larry and Chet for the photos. -- Derek Redmond