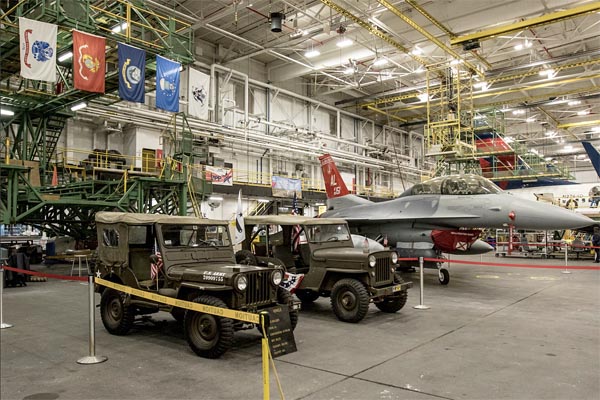 The event of course had a strong aviation focus, but Jeff's Jeep CJ-3B an M38 formed a great centerpiece for the display of artifacts contributed by veterans from all service branches, including uniforms, pictures, patches and medals. 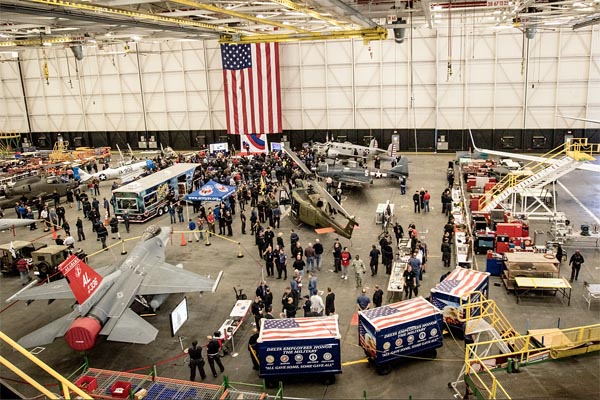 Jeff commented, "We have a large group of Vets of all ages at my employer and we honor them all; my high hood is also proudly honoring all who have served."

Vintage aircraft present for the 2016 event came from groups including the "Sky Soldiers" of the Army Aviation Heritage Foundation, and the Commemorative Air Force, Dixie Wing. There were also two F-16s on hand from the Alabama Air National Guard. 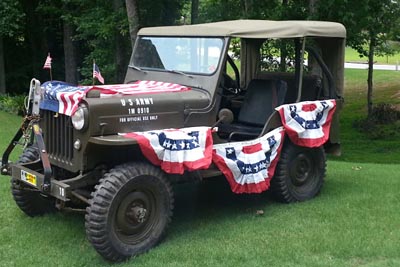 Jeff described why he decided to clone a military Jeep: "My brother and I grew up in the early 70's he registered with the draft board in '72 and me in '75 but by then the war had ended. I always respected those who served and with us growing up on several Air Force bases and Dad retiring in '71 from Carswell AFB in Fort Worth (Fot Wuth) we decided the local jobs were good enough for us. I have always had a soft spot in my heart for military vehicles and aircraft." 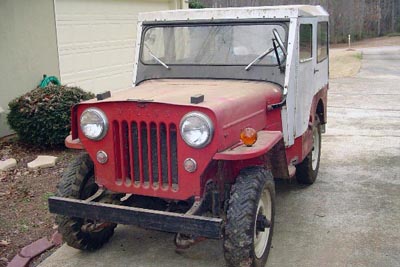 See also the interior (90K JPEG) when Jeff bought it. 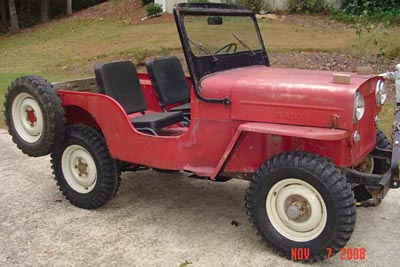 First order of business was new tires: "My order from Vintage Tire arrived yesterday, so I felt obligated to get them onto their new home. 700x 16 NDTs. Gained 1" clearance from the old 600x 16s. I went with NDTs cause she don't see much wet road driving, only muddy road driving.

"As for price, $499 with tubes shipped to my door. I went with the Specialty Tires of America brand -- they are cheaper than the Firestones. I ran the STAs on my other Willys years ago and they are quality tires." 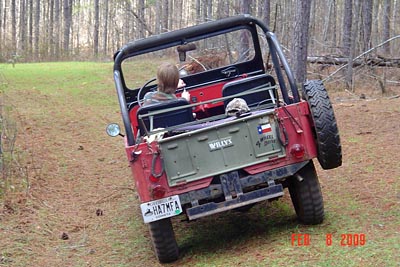 "We went to the new hunting club for several hours of scouting and wheelin' fun. A friend brought his 14-year-old son so it was time for some clutch lessons in the old Jeep. He admitted he had a blast." 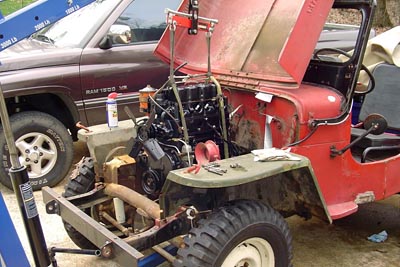 In 2009 Jeff installed the rebuilt engine (220K JPEG): "Getting ready to throw the switch on my rebuild. Bolted it in yesterday, going to start it today then retorque head after cool down. Then go for a ride tomorrow and start the break in." 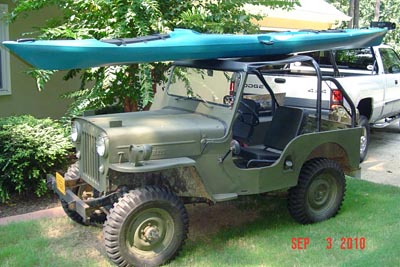 "About 1500 miles on the clock since overhaul -- still runs great and wearing a new coat of OD. I use it for hauling my yak to the local lake for a fishing trip. Too far to use it to for a trip to the Florida coast. Kayak sitting on top here before tiedowns." 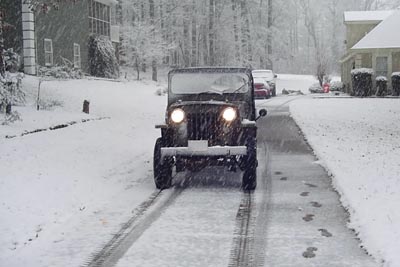 2010: "Schools are closed today in anticipation of snow here in the Atlanta area -- grocery stores are packed. Finally started snowing around 2 PM. Around 4:30 I decide to get out and take some pics. We ended up with 3-4 inches here in Newnan." 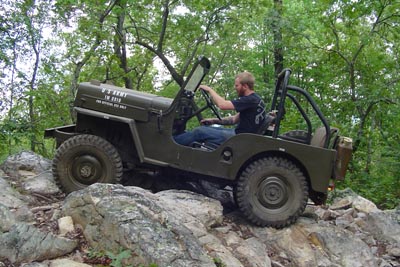 September 2012: "Several of us got together for a trail ride over in eastern Alabama at Chocolocco Mountain offroad park. The ol' gal surprised all but me. I let my son drive so his arms would be sore from fighting the Ross box. The replacement tub is still hiding in the garage." 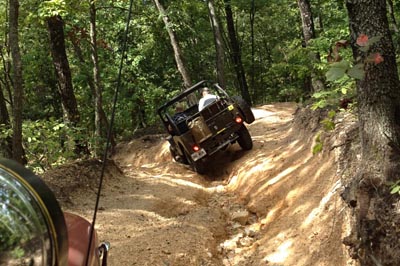 "Private offroad park, mostly geared towards the rock crawler crowd. I been neglecting my Jeep for too long." 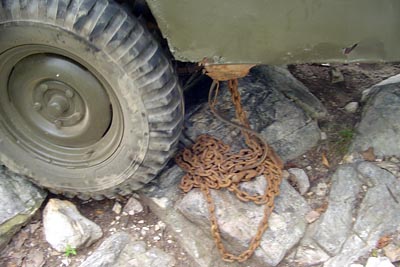 "The 3B suffered a herniated toolbox floor, from a long history of PA winters and Mr. Rust." 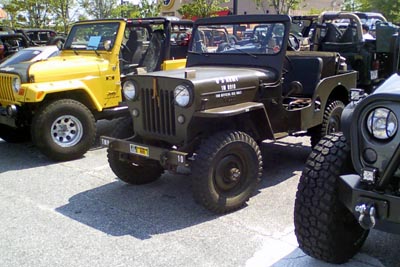 "Been concentrating on my fishing for the summer, but figured I'd take my 3B to the local Jeep topless event. Sad day for Willys -- most were yuppies in their JK's. Only one other vintage Jeep besides mine." 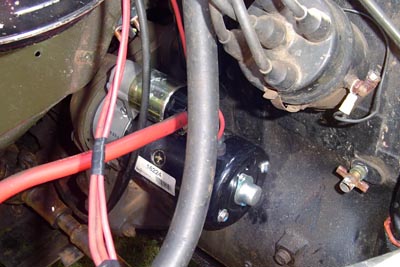 "My 6-volt starter was acting up, so instead of rebuilding it I installed a Toyota Landcruiser starter while finally swapping over to 12 volts. Picked up the LC starter for $55."

See details of Jeff's install on the Starter Problems page. 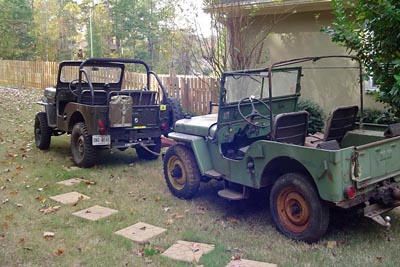 "The other Jeep is my barnfind '46 CJ-2A which is a survivor and 95% original, and sports the original patina pasture green paint and a rear pto with the rear drum for powering up the implements that the previous owners purchased. It is a sometimes driven garage gnome with a few rust spots." 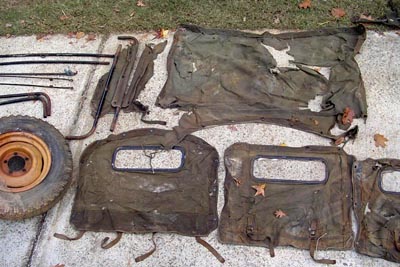 "The CJ-2A included the original canvas top and support rods." 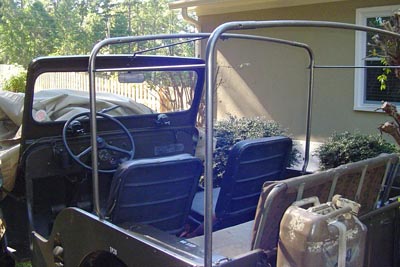 Jeff bought the top bows for the 3B from TopBows.com, who unfortunately are not currently producing any new bows. 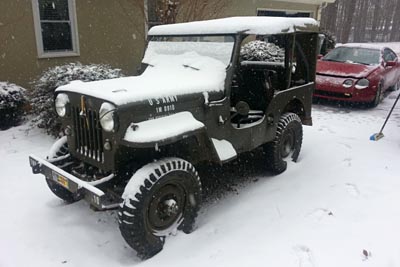 He bought the top from Beachwood Canvas, including the optional rear enclosure with the large opening, and luckily had it installed in time for the snowfall of January 2014.

Jeff has also been working on a new body and new frame (see Bumper Replacement) which he intends to swap over. 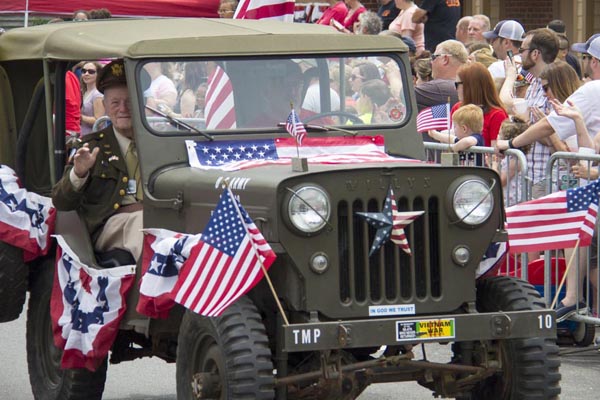 "The last picture is from the 2014 Memorial Day parade in Senoia, Georgia. I proudly drove a local World War II veteran, Capt. Andrews, in the parade."

Thanks to Jeff and to Delta TechOps for the photos of their 2016 event. -- Derek Redmond