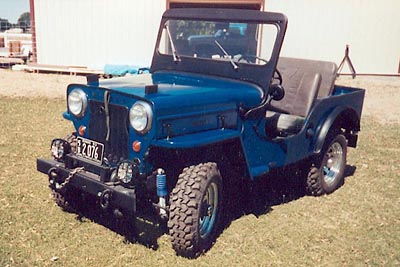 Dad died in 1999; we sold the CJ-6 at an estate sale and I kept the 3B. My first thought was to rebuild it back to it original condition. There had been nothing changed since it was new. I do have the original frame, most of the sheet metal, and parts of the drive train. But I soon found out that if I was going to make it driveable I should make some changes. I added about 1001 parts and now I've got it back together.

Here's the story of this Jeep: Art Rodda, who in the early 1950s owned Rodda Paint Co. of Portland, Oregon, used to go deer hunting every fall with my Dad, Van Houston, who at the time owned a cattle ranch in central Oregon. Art thought he needed his own Jeep; his story was that he had won enough betting on the dog races to pay for it. This brand new CJ-3B was bought from Cohen-Anderson, a dealer in Portland, and about the only time he used it was to come hunting for 2-3 weeks each year.

In August of 1952 I went with our family to Art's place in Portland. He had just bought the 3B and I rode to the coast with his stepson. We stopped by the Jeep dealer to have them check on something that Art wanted done. My two sisters rode down with Art and his wife. I had always thought this was in 1952, but wasn't sure until I talked to my sisters recently and both agreed it had to have been. 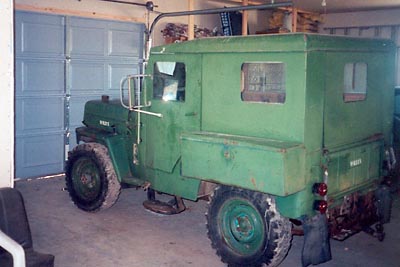 It had all the bells and whistles; the new big 72-HP motor, a full metal top with a metal box on the side, a 4000-pound PTO winch, dual windshield wipers, a radio, and even a heater that blew out warm air!

There was a vent on both the right and left side of the cowl (70K JPEG). A Jeep with a metal top gets very hot, so Art had these put in soon after he got it.

Art always had to have the best of everything, so he must have bought everything that the Jeep dealer had for sale. This may not sound like much to you guys with your 400-HP rock crawlers and your 12000-pound winches, but at 16 I was easily impressed.

To go between the two front seats there was a jump seat (100K JPEG) manufactured by the W.L. Dumas Mfg. Co. in Oklahoma and sold by Jeep dealers. See also the back of the jumpseat, 100K JPEG. 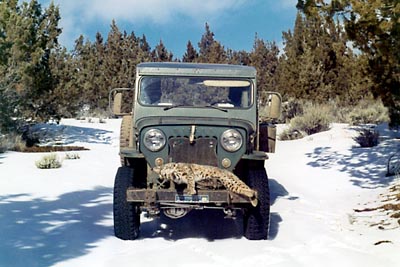 Well, Art had it for 7 or 8 years and then sold it to Dad in 1960 for $500. At the time, Dad had sold the ranch and had gone back to trapping for coyotes, bobcats and beavers, which he had done most of his life. For the next 30 years he used both the 3B and his CJ-6 for that and for hunting. These Jeeps would not climb rimrocks like some of the Jeeps of today, but I would bet there are few Jeeps that logged up more miles with chains on all four wheels than either of these. The 3B was driven over most every old road and cow trail in eastern Oregon.

This picture taken in 1972 shows a bobcat on the front bumper; in another picture (50K JPEG) the Jeep is loaded with large beavers taken on the trapline. 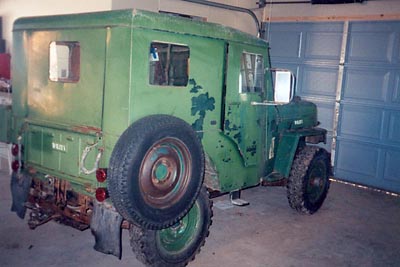 The last 10 years it sat in Dad's back yard, and it had not been started for the last 7 years.

When I got it home to Idaho my wife took one look at it and said, "And what will it cost to fix that hunk of junk?" I told her that I could completely restore it for less than 20 grand. Since then I have worked a lot of hours on it, bought a lot of parts and a lot of books on how to fix your Jeep, and spent a lot of hours on CJ3B.info. I think I'm still under budget, and that is better than the government does on any of their projects. 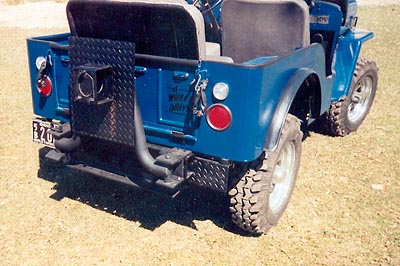 I put on a 12-volt alternater, all new wiring, and 11-inch brakes. I added a Saturn overdrive with adapter so I could keep the PTO (70K JPEG). An OD is well worth the price, but I did have problems with the PTO; even the tub wouldn't fit and I had to put a 1-inch lift under it.

It runs, it stops, and doesn't look too bad. It still needs a new top and some seat covers. The spare tire carrier works great.

Click any of these photos for a larger copy (100K JPEG):

The first I saw of the Wilwood brake system was in the May 2000 issue of Petersen's 4 Wheel & Off Road mag. They put just the brake pedal in an old Dodge truck. I called Wilwood and they told me they had heard of someone using it in a Jeep, and sent me a catalogue and price list. After thinking about this for 6 months I ordered the set, but I had no idea if I could get it to fit or not. It does fit but not much room to spare; I could not see any way to mount it and have the brake on the right side of the steering column.

The Wilwood system works great. One problem is that it is written all over that it's only for racing cars and not to be used on public roads. The state of Idaho does not have a safety program so I was not worried about that. Maybe in states like California this could be a problem. Cost was about $500. Advance Adapters also list a set like this; I have never seen a picture of what theirs looks like. -- Glenn Houston

See also a photo of the left side of the engine (100K JPEG).

Thanks to Glenn for the story and photos. -- Derek Redmond