This page describes the three phases of the process I went through in restoring/rebuilding a 1954 Jeep. See the previous page Part 1: Finding the Pieces for background on the Jeep, and a number of detailed photos of NOS parts assembled for the project.

From the beginning I knew this restoration needed to be mechanically sound, as I was going to use the Jeep on the trail. I also felt I could make changes to safety items like lights, wipers and brakes, and not feel bad because I deviated from the original. 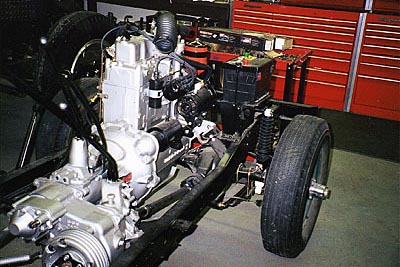 We disassembled and sandblasted the body (30K JPEG) and frame. Since the vehicle only had 24,000 miles on it and the engine seemed strong (and didn't smoke) we decided to pull the engine/transmission/transfer case as a unit and just steam clean and paint them. At this time I replaced the timing gear, rear main seal and most engine components such as fuel pump and water pump.

I also steam cleaned and painted the front and rear axles, and replaced the pinion seals. I added Rancho helper springs to all four spring packs, and re-used the original c-shackles.

We put in a Warn OD, but though the 3B was very dependable, it didn't really have the power needed to push overdriven 3rd gear even on flat roads. 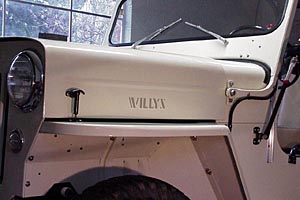 Phase I also included the canvas top. We chose a tan Martin Seymour urethane tractor paint that complemented the canvas from Beachwood canvas.

We used a rubber hose used to bring electrical wires up to the wipers, using the same route as the original vacuum hose. A couple of other modifications: the strip for the front of the door is aluminum (OEM was steel) and the Ford GPW hood blocks I used are shorter than the 3B ones. This shot also shows the placement of the Willys logo on the hood -- it could be stencilled there even on a repro hood without a stamped logo.

After driving the Jeep for about 5 months, with one trip to Moab, I decided to pull the engine and rebuild it. It was bored .030 over and I replaced the pistons and cam. I also chose this time to put in a new HD clutch. Running trails in Moab reminded me of how stiff the original springs (with the added helper spring) really were, and this stiffness was causing traction problems due to the inability of the suspension to drop when needed. I decided a step in the right direction would be a Powrlok in the rear, and this required an upgrade to 19 spline axles in the Dana 44 rear. I also found a rear seat at this time (from Joel Kamunen), and had it blasted, painted and the original springs recovered with tan canvas.

With about 750 miles on the rebuilt engine I was driving it hard up a long paved hill and all of a sudden, "ping, clatter, clatter, clatter." I had broken a tappet on cylinder #3. No one I have talked to regarding this event has ever seen an original tappet break like mine did, but tappets for f-heads are available as sets, and I would recommend replacing the entire set when doing an engine rebuild. 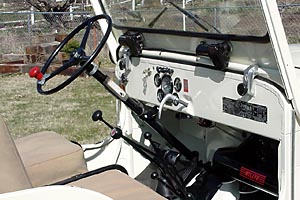 This phase included rebuilding a Bantam BT3-C trailer and some final details on the Jeep itself. I had been waiting for an inspiration about wheel color and detail paint colors, and finally 2 years after the project was done I had decided on a darker brown wheel with body color ring and I chose a medium gray/brown for the body stenciling and Willys logos. So I ended up with 7 original Kelsey Hayes 16" wheels painted brown and I also have another set of 7 painted a dark red (for parades?). 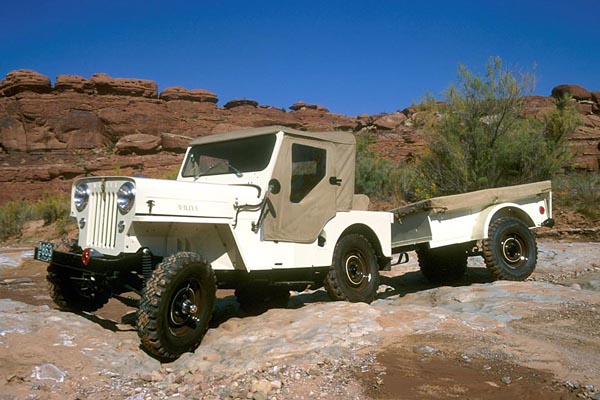 The Bantam trailer was found in Salt Lake City and. like the Jeep, it uses original springs and c-shackles with a Rancho helper spring. I replaced the floor of the trailer and made some changes to the rear bed supports and obtained a matching tan canvas cover (with manilla ropes) from Beachwood canvas.

Nice photo by Jim Allen from his article in the April 2000 issue of Jp magazine.

Thanks to JMK Repair in Grace, Idaho for all the help and support, and also a big thanks to Derek for posting this and the many other wonderful pages that make up CJ3B.info.

And thanks to John for the information and photos of his project. -- Derek Redmond

See also photos of the Jeep on the trail, in the Hubbard's Halfcabs CJ-3B FAQ.