Before Willys-Overland had even finished building their CJ-2 preproduction models in 1945, they decided to drop the name "Agrijeep" for their new civilian jeep vehicle. It was already clear that the jeep woud not replace the tractor in North American farming; it cost more than a small tractor, lacked the very low gearing and high ground clearance needed for some fieldwork, and lacked a clear view of rear implements from the driver's seat.

Willys adopted the more appropriate name "Universal Jeep," emphasizing the huge variety of on- and off-road tasks the vehicle could handle. But they also continued to see agriculture as one of their prime markets, and promoted the "Farm Jeep" concept (see CJ-3B Farm Jeeps.) 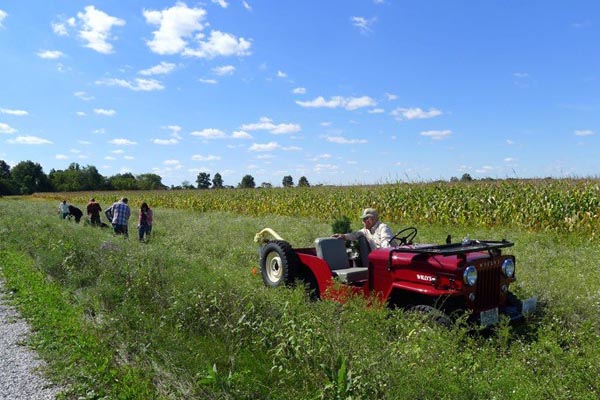 This Jeep was the central focus of a 2012 exhibit hosted by the University of Toledo's Center for the Visual Arts, titled "Universal Future: Where There's a Willys There's a Way." The exhibit included a field trip with students (right) to plant trees (170K JPEG). 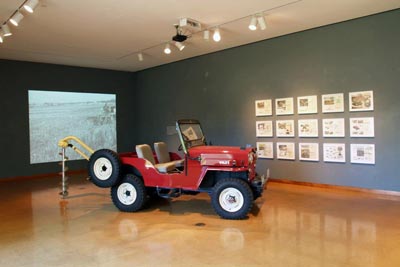 The demonstration and display was curated by the artist collective M12 from Colorado. They celebrated the wartime vehicle which became a global peacetime success in form and function, as a symbol of "a universal regenerative future." M12 placed particular emphasis on the Jeep's capabilities in agriculture.

Following the field trip, John's CJ-3B was exhibited at the University's art gallery, where Barry and Evan Thomas, of the Farm Jeep website, helped M12 interpret the history and significance of this versatile vehicle. 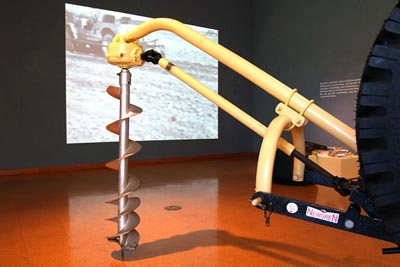 The Universal Jeep's ability to carry and power agricultural equipment, with a 3-point hitch and power take-off, is essential to its role in farming. John's PTO post hole digger was an elegant example for the exhibition; the function of this auger is immediately clear to anyone.

Photos courtesy of the Center for the Visual Arts. 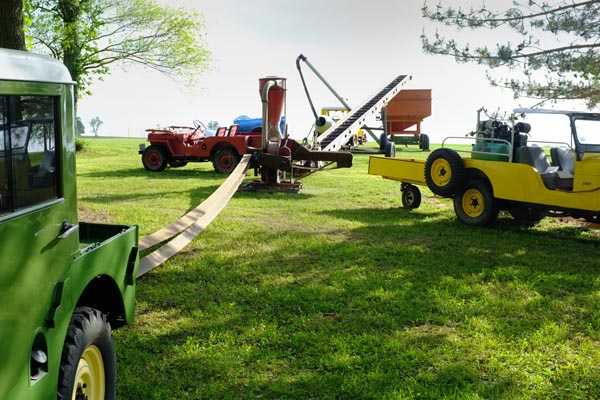 June 2015 saw most of the Ittel collection on display and in operation, at John and Phyllis Ittel's family farm, during the annual Willys Jeep Rally. Bob Christy took these photos.

Take a look at the larger copy (400K JPEG) of this photo of the corn grinding operation, demonstrating some of the tasks Jeeps can handle on the farm. The yellow CJ-6 brings a trailer load of corn to the hammer mill (center) where it is ground and carried up an elevator into a hopper, and then augered into a Cherokee mixer (200K JPEG) on a DRW '46 CJ-2A. 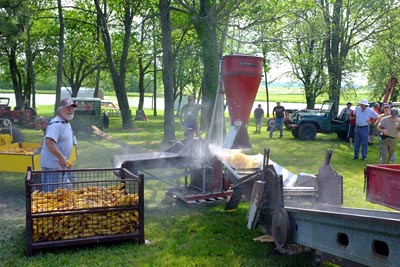 Rick Riley feeds corn into the 1940's McCormick-Deering hammer mill, which grinds the kernels and cobs for cattle feed, and drops it onto an elevator. The mill is powered by a belt from the PTO of the green 1946 CJ-2A (with Willys halfcab) in the background. 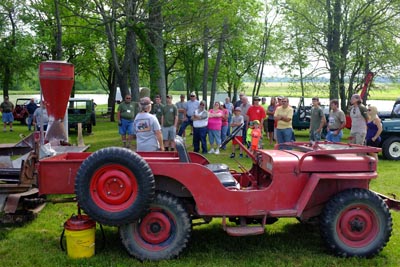 The conveyor is driven by a shaft from the PTO, below the rear box extension, on John's unrestored 1953 CJ-3A. The crowd at the Willys Rally is getting a rare chance to see this much farm Jeep hardware in action. There are also bags of ground corn for everybody; it makes good birdseed! 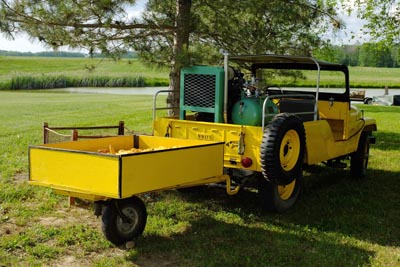 The CJ-6 pulls an Allstate (Sears Roebuck) single-wheel box trailer. The single-wheel design follows the tow vehicle closely, hitched to both ends of the bumper and pivoting on the single wheel rather than the hitch. It's also easier to back up!

For the Rally, John has his Hesse Hornet air compressor in the bed of the CJ-6. Manufactured by Hesse in Kansas City MO in the early 1960s, it's powered by a Kaiser-built L-head engine. Cylinders 1 and 4 are normal, while 2 and 3 are used to compress the air. A heavier flywheel keeps it turning smoothly on two cylinders. 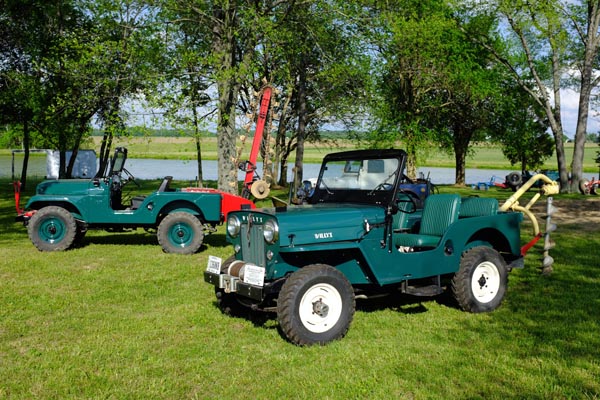 The Danuser post hole digger is mounted on John's green '53 CJ-3B, a configuration many people remember from the 2007 Classic Jeep Calendar.

Also on hand is his Auburn "Jeep-A-Trench" trencher mounted on a CJ-5. It isn't too often you see one of these rigs fully restored, and John painted it to match an Auburn postcard. 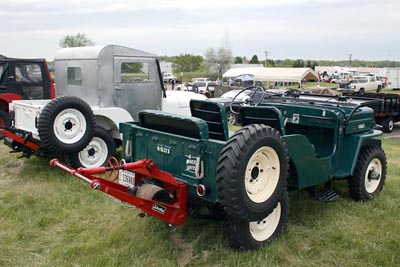 A rear view of the green 3B reveals the low-profile Stratton implement lift. See more photos of the 3B in Green Prairie Farm Jeep on CJ3B.info. Both of John's CJ-3Bs have the rare crankshaft-driven front winch.

This photo was taken in early 2007 in Rochester Hills, Michigan, at the Spring Willys Reunion. John's '63 CJ-5 with Newgren lift and Sears aluminum halfcab is in the background. 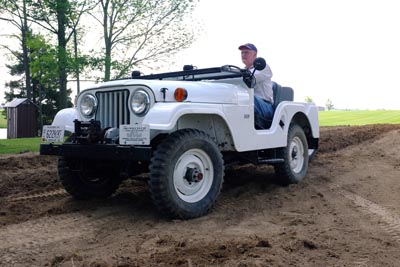 At the Willys Rally, the white CJ-5 is in action without the hardtop, but with a Newgren plow mounted. Jim Allen gives it a try. 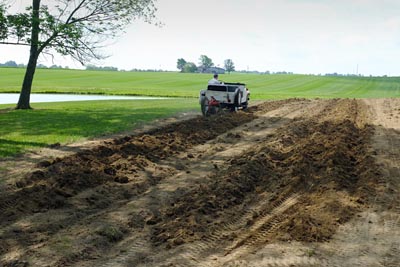 Jim cuts a pretty straight furrow in the loam of the Ittel family farm, which is conveniently located adjacent to Hueston Woods State Park, home of the Willys Rally. 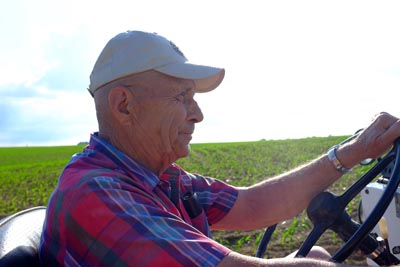 John Ittel, who was a Jeep owner since he was 16, took the wheel of the CJ-5 for a tour around the farm. Once a lot of the operation of his farm was taken over by younger members of the family, John was able to devote more time to the restoration of the remarkable collection of Jeeps and machinery he assembled. 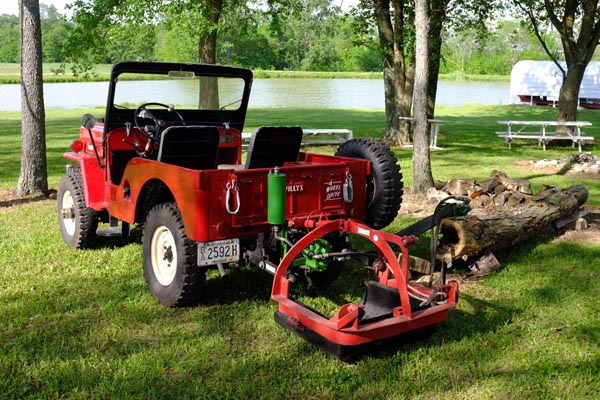 The red '54 is outfitted for the Rally with a couple of interesting attachments. The 6-cubic-foot Newgren scoop is a versatile earth-moving tool, and the Von Ruden hydraulic-powered chainsaw is a big, two-person saw built in Minnesota in the early 50's.

Thanks to Bob Christy for the great photos, including this July 2015 cover photo for CJ3B.info. 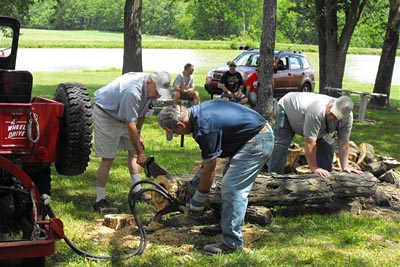 Thanks to the Willys Jeep Rally website for this photo. 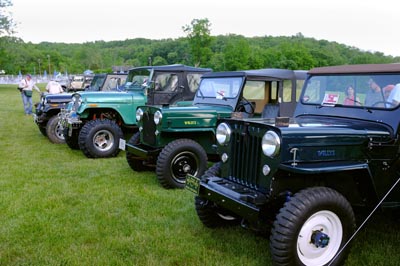 A couple of other CJ-3Bs in attendance at the Rally: 1953 Jeeps belonging to Dave Streithorst and Bob Christy sit side by side at Hueston Woods State Park. 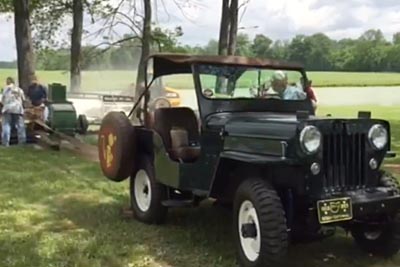 Bob Christy's video of the Willys Rally on YouTube shows his 3B pulverizing some good-sized boulders with a belt-driven rock crusher. It also includes a good look at the four-Jeep corn grinding operation, and many of the other Jeeps at the Rally. 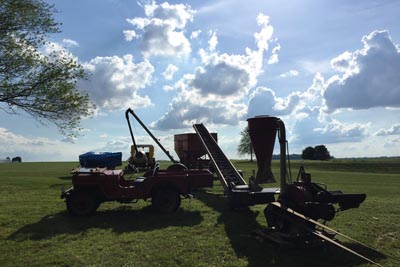 One more nice photo by Bob. Idle Jeeps sit at the Ittel farm, late Friday afternoon after the day's demonstrations.

Thanks to Bob Christy, and Richard Saxton of M12. -- Derek Redmond

See a memorial to John Ittel in Jeep Lives Lived on CJ3B.info.

See photos of John's machinery from the 2016 Willys Jeep Rally, and a 2009 article from Antique Power magazine, called "My Turf, My Jeeps".